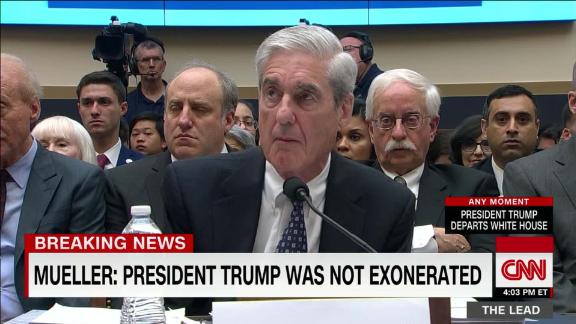 Democrats fell all over themselves at Wednesday's televised House hearings to thank the former special counsel Robert Mueller -- deservedly -- for his service as a decorated Marine, a career public servant and a patriot, while Republicans impugned his integrity and that of his investigation and his team.

Although Mueller showed loyalty to his team, he did not show loyalty to his country. Whether he was cognitively impaired (as he seemed not to know the names or positions of some of his key witnesses, notably the former Trump campaign manager Corey Lewandowski) or had simply misplaced his spine, he appeared to be lost. Why the man who showed such courage on the battlefield showed such timidity and hesitation Wednesday, requiring members of Congress to read him a bedtime story because he would not even read his own words aloud, is unclear.

Americans needed a definitive, plain-language, nonlegalistic statement from Mueller about one and only one question: Did the President and his henchmen and women commit a crime?

Did his participation in the dissemination of information from emails stolen by Russians and leaked by Wikileaks, with Trump's encouragement, violate campaign laws? Or was it treason, namely helping a hostile foreign power -- our chief adversary over 70 years -- attack our bedrock democratic institution, elections? Did Trump commit any of the 10 counts of obstruction Mueller laid out in his report to cover up those or any other crimes? And did he commit any other felonies, such as witness intimidation, as he had clearly indicated in the report?

If the answer to any of those questions had been an unequivocal yes, the House would have been required under the Constitution to hold impeachment hearings. If the answer were indeterminate, the House might still hold hearings to question the witnesses themselves, so it could decide, as the public watched, whether this was a "witch hunt" or a legitimate investigation. If the answer were no, Democrats might disagree, but they would better spend their time electing a Democrat in 2020.

Instead of answering any of the questions we Americans had hired him to answer, Mueller pleaded "no contest." This was not a "neutral" political move. It provided Republicans good reason to argue that the investigation was a two-year, multimillion-dollar waste of time.

Sure, his investigation put a half-dozen other people in prison for one crime or another, but Mueller chose to immunize the person who may well be the fulcrum for those crimes, allowing him to remain in the highest position in the land without a trial.

And sure, other state and federal prosecutors may ultimately indict Trump, in or out of office, or perhaps, like Nixon, he will face a reckoning a year or two after he is re-elected.

But as a taxpaying Democrat, as of this moment, I have to agree with Republicans that this was a waste of my time and money -- not, as they would argue, because the Mueller report made no determination about "collusion" or obstruction. It was a waste of time and money because we hired a prosecutor who, after agreeing to serve his country one last time, chose to go missing in action.