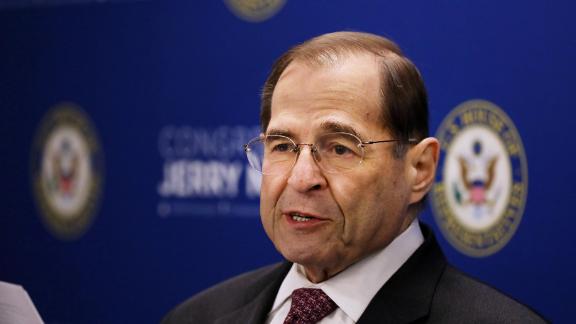 House Judiciary Chairman Jerry Nadler comments on Labor Secretary Alex Acosta's involvement in a 2008 plea agreement for multi-millionaire Jeffrey Epstein when he was a US attorney in Miami.

It's now seven wins in a row for the American League, which beat the National League 4-3 last night in MLB's All-Star Game in Cleveland.

Will Alex Acosta survive? There are more and more calls for Acosta, the US labor secretary, to step down over his involvement in the 2008 plea deal for multimillionaire Jeffrey Epstein. Acosta was a US attorney in Miami when he signed off on Epstein's agreement, which many critics called too lenient. In the agreement, dubbed the "deal of a lifetime" by the Miami Herald, Epstein avoided federal prosecution on sex trafficking charges by pleading guilty to two state prostitution charges and serving just 13 months in prison. He also had to register as a sex offender. Epstein, who was arrested over the weekend, now faces similar charges. He's pleaded not guilty. If convicted he faces up to 45 years in prison.

Acosta defended how he handled the Epstein deal, saying the actions he took put Epstein in jail, forced him to register as a sex offender and "put the world on notice that he was a sexual predator." President Trump defended his labor secretary, calling Acosta "excellent" and saying that "a lot of people" were involved in the Epstein plea deal, not just Acosta. But as Democrats continue to call for Acosta to resign -- and use the scandal as a way to question the President's judgment -- Trump may decide keeping Acosta around isn't worth the headache, CNN's Stephen Collinson says.

President Trump has vowed to get a citizenship question on next year's census form, despite a Supreme Court decision last month that blocked the move. To aid that effort, the Justice Department wanted to swap out its legal team that was working on this. But a federal judge rejected that, saying the administration didn't provide any reasons that would justify such a move. Requests for legal team changes in civil cases are almost always allowed, making the judge's ruling even more surprising in the case. Attorney General William Barr said the administration would decide this week on a course of action to get the question on the census, including a possible executive order. Civil rights groups argue that including it will scare off legal immigrants as well as undocumented migrants, leading to an inaccurate population count.

It hasn't dominated the headlines, but there's a major Ebola outbreak going on right now in the Democratic Republic of Congo. So far it's killed 1,630 people, according to the World Health Organization, making it the second-biggest Ebola outbreak in history. But there is some good news in the fight against the deadly disease. Two experimental drugs have been found effective in treating the strain of the virus in this particular outbreak, according to new research published yesterday. The drugs are now being tested in clinical trials. Officials hope viable treatments come from the research soon. There are reports that Ebola in this current outbreak has already jumped the border into neighboring Uganda.

4. Tariffs and the Bible

The trade war between the US and China could hurt an unlikely victim: the Bible. If the two countries can't hammer out a trade deal, President Trump has vowed to put tariffs on all Chinese goods coming into America. Book publishers warn those tariffs could cause the price of printing the Bible to soar and lead to potential shortages. Most US publishers print the Bible in China to reduce costs. HarperCollins Christian Publishing, a leading Bible publisher, has asked the administration to remove Bibles and other religious publications from the tariffs list. It's another reminder of the unintended consequences of the trade war, which has already badly hurt US farmers.

In many ways, Ross Perot was ahead of his time. He was a Big Tech billionaire before Steve Jobs and Bill Gates. He was a populist, outsider presidential candidate before Donald Trump. Perot died yesterday at the age of 89 after a five-month battle with leukemia. He'll be best remembered for his astonishing third-party runs for the presidency in the 1990s, when his Texas twang and populist ideas earned him almost 19% of the vote in the 1992 presidential election.

He famously railed against the North American Free Trade Agreement, warning of a "giant sucking sound" of US jobs to other countries if the trade agreement passed. He served in the Navy and worked as an IBM salesman before starting his own company -- with a $1,000 loan from his wife -- in 1962. Despite losing his presidential campaigns in 1992 and 1996, Perot's cable TV-centered strategy served as a model political candidates have used ever since, CNN political analyst Julian Zelizer says.

Gone but not forgotten

Rip Torn will be best remembered for his role in the "Men in Black" movies, but the Emmy winner appeared in all kinds of projects during his seven-decade career. He died yesterday at age 88.

Put a ring on it

Want to see Saturn and its rings? Now's the time. You can look for the gas giant in the southeast sky and, if you have a telescope, you can even see its rings.

Before the new "Lion King" comes out next week, we're being gifted with a new song from co-star Beyoncé.

Wallet in the wall

Her wallet was stolen 75 years ago. Turns out it was inside the wall of a high school bathroom all this time.

'Thanks for the memories'

Netflix is saying goodbye to its "Friends." The popular sitcom is moving to the new streaming service of WarnerMedia (CNN's parent company).

The celebration for Team USA's Women's World Cup win continues with a ticker-tape parade starting at 9:30 this morning in New York City.

The number of miles in a new road that will link Europe with China. The road, called the Meridian Highway, will be the shortest route to move goods between the continent and the Asian country.

Check out this sculpture, sitting on the grounds of the CIA, which contains a secret message that no one's been able to solve for 30 years. (Click to view)