Ross Perot, who lost an election and transformed the world 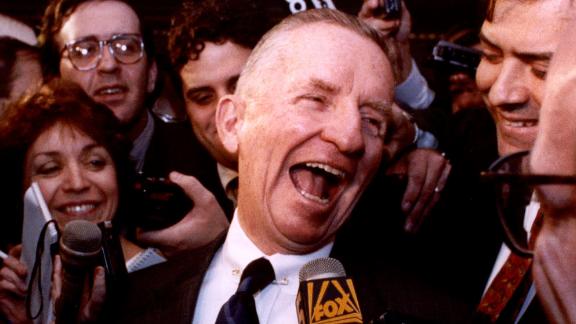 Ross Perot, the billionaire tycoon who mounted two unsuccessful third-party presidential campaigns in the 1990s, has died, family spokesman James Fuller confirmed to CNN. He was 89.

Sometimes the losers in presidential politics still have an immense impact on the way that we conduct our democracy.

This was the case with the Texas billionaire Ross Perot, who has died at the age of 89. Although Perot's independent candidacy was unsuccessful in the 1992 election (and he really struggled in 1996), his television-centered strategy served as a model for subsequent candidates from both major parties.

For better or worse, Perot understood that cable television had become the dominant medium of political communication. The spread of cable in the 1980s and early 1990s resulted in the rapid proliferation of channels, each more specialized than the next, and a 24-hour news cycle that demanded constant content.

During his 1992 campaign for the presidency, which ended up garnering about 19.7 million votes in a contest against President George H.W. Bush and Arkansas Gov. Bill Clinton, Perot brought his case directly to the people via the televised airwaves. He announced his candidacy on CNN's "Larry King Live." Perot told King that he would run as long as his supporters were able to get his name on the ballot in all 50 states. Perot also asked supporters to make small contributions to his campaign, which led to the telephone lines lighting up.

Besides appearing in interviews on television that brought him free airtime, Perot used infomercials as a way to make his case. Infomercials were all the rage in the 1990s. These were long advertisements meant to look like television shows. With his strong Texas drawl, the businessman used air time he purchased to rattle off information about the growing federal debt, the importance of balancing the budget, the jobs being threatened by foreign competition.

The 30-minute infomercials were not flashy, but they did employ visual elements such as graphs and charts to make clear points to viewers. More than 16 million people saw the first ad that he aired on October 6, 1992, according to The New York Times.

Understanding that television shows had to keep viewers interested, Perot became a character in his own story. Family members appeared to sing his praise. He was the folksy businessman who understood how to make things work as, he said, was evident from his own bank account. He promoted a thin and simplistic -- though for some attractive --populist, anti-incumbent message tailor-made for television.

His colorful charts and snappy interviews were littered with snappy sayings made to grab headlines. Perot promised to "take the trash and clean out the barn." He always kept things simple, using the increase in the debt to symbolize all that he argued was going wrong with the country.

One of his signature phrases was his warning of a "giant sucking sound," with NAFTA enabling Mexico to threaten American jobs, prefiguring Donald Trump's focus on economic competition from America's southern neighbor.

Perot understood that in the cable television era, presidential candidates had the opportunity to take their case directly to the people and didn't even have to suffer through the filter of journalists anymore. By the 1990s, the news media offered a way for candidates to say what they wanted when they wanted to say it.

Since his first run, presidents and presidential candidates have accelerated their efforts to tailor their governing style to the 24-hour, fragmented news universe. For instance, one of the first steps that President Clinton took to make sure NAFTA made its way through Congress was to send Vice President Al Gore back to "Larry King Live" to debate Perot.

We are currently living deep in the world that Perot helped create. President Trump focuses on cable news, obtaining much of his information via these channels and constantly attempting to shape the on-air conversation to his advantage. His Twitter feed is a real-time infomercial enabling him to send out whatever information he wants.

Perot's passing offers us a moment to reflect on just how much the world of presidential politics has changed in the past few decades. It is also a time to think about some of the high costs that this form of politics has brought us.