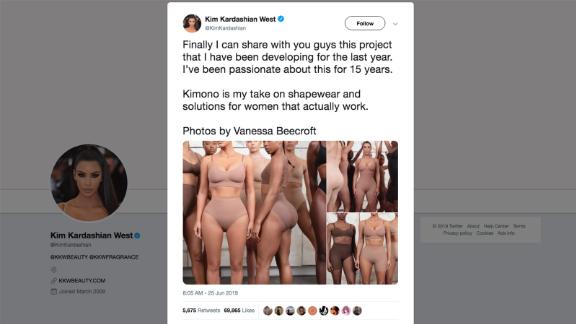 Kim Kardashian West has been accused of cultural appropriation after launching a brand of shapewear called Kimono.

Kim Kardashian West has been accused of cultural appropriation after launching a brand of figure-hugging underwear called Kimono.

The reality TV star took to social media this week to launch the new line of "shapewear" in various flesh tones. Images of shapely women modeling the range were posted on Twitter, along with this tweet from the mother-of-four: "Finally I can share with you guys this project that I have been developing for the last year. I've been passionate about this for 15 years.

"Kimono is my take on shapewear and solutions for women that actually work."

The website for the range says: "Kimono is the culmination of Kim's personal experience with shapewear and is fueled by her passion to create truly considered and highly technical solutions for every body. Whether the desire is to enhance, smooth, lift or sculpt, Kimono provides superior options for all shapes and tones."

The collection features seamless bras, one-piece bodies, high-waisted underwear and a bizarre pair of one-legged shorts -- apparently intended for wearing under skirts and dresses slashed to the thigh.

But what has really riled critics is that Kardashian appears to have trademarked the word "kimono." According to Business Insider, a search of the online database for the United States Patent and Trademark Office revealed that Kimono Intimates Inc. applied to trademark a specific font version of the word.

Originating in the Hakuhō (Early Nara) period (645-710), the kimono is an ankle-length gown with long, wide sleeves and a V- neck. With neither ties nor buttons, it is tied left over right across the chest and secured at the waist with a broad sash called an an obi.

The reaction has been far from positive, with many expressing their disapproval using the hashtag #KimOhNo.

San Francisco-based Yuka Ohishi, who tweeted about the controversy, told CNN: "I was not very pleased by companies using the word kimono to market beach cover-ups and robes. And then Kim Kardashian went to a whole new level by simply using the word as a pun. Her line is not at all inspired by the Japanese kimono, pays no respect.

"Kimonos are an important part of our culture -- for me and my family, we have worn it to celebrate health and growth, engagements and marriages, to funerals. They are handed down from generations and cherished. For other Japanese people, it's part of their everyday attire.

"It makes me furious to think that Kim Kardashian's brand would just take the name, try to trademark it, and use it to sell something completely irrelevant."

Yasuno Yoshizawa, also known as Bunkaiwa, is a Japanese "cross culture consultant" based in California.

She tweeted: "I feel very sad that the name "Kimono" is being used to something completely different from what we Japanese know about it. Kimono is Japanese traditional clothes and we are very proud of its history and culture. I'm sorry but I feel this name choice is simply ignorant. #KimOhNo"

Tweeting a picture of herself as a bride, Misako Oi wrote: "This is #kimono I wore to my wedding. I'd like Kim to imagine how she'd feel if someone treated her wedding, prom or baptism dresses as lingerie.

"'Kimono' are not just clothes but are a symbol that evokes precious memories and important life events. #KimOhNo".

Putting it more bluntly, Mishamusic tweeted: "My culture is not your underwear. #KimOhNo".