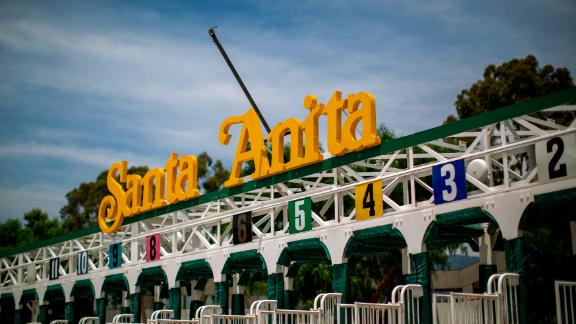 Trainers are being investigated to see if they played any role in the string of 29 horse deaths at the Santa Anita racetrack in Arcadia, California, this year. CNN's Nick Watt reports.

Trainers are being investigated to see if they played any role in the string of horse deaths at Santa Anita racetrack this year.

A total of 29 horses have died at the California course, and many wonder if the unusually heavy rainfall caused problems on the dirt track this season, though the death toll is lower than in recent years.

The California Horse Racing Board (CHRB) is investigating that and has experts examining the remains of the dead horses for clues.

They are also working with the Los Angeles County District Attorney's Office, which launched an inquiry into "whether unlawful conduct or conditions affected the welfare and safety of horses."

The CHRB, which governs the sport in the Golden State, declined an interview request from CNN. Results of the inquiry are expected sometime after the Santa Anita racing season ends Sunday.

Jim Cassidy, president of California Thoroughbred Trainers, an industry association, pointed to how the track owners responded to extremely wet weather at Santa Anita, which is usually arid, especially in the summer.

"They kept sealing the track. But, unfortunately, every time you seal it, the pad underneath gets harder and harder," he said.

But there are other issues, said Stefan Friedman, spokesman for The Stronach Group, which owns Santa Anita.

"It's not just the surface they're running on. There are medication issues," he said.

Some 25 trainers have lost horses at Santa Anita this season, including Cassidy. Asked what happened, he said: "We haven't figured that out yet."

Hall of Fame trainer Jerry Hollendorfer has lost three horses at Santa Anita since December and another two at Golden Gate Fields near San Francisco, another track owned by The Stronach Group.

He has amassed nearly $200 million in earnings over a storied 40-year career. He's also been sanctioned 19 times by the CHRB since 2006, for overmedication or use of illicit medications on horses. CNN found no evidence of any successful appeals.

Hollendorfer is among the trainers whose records and actions are now under scrutiny by the Santa Anita owners. He declined to speak CNN.

Scott Herbertson, a racehorse owner and professional gambler, believes some trainers are going too far.

"You got guys pushing these horses beyond their limits and causing these catastrophic breakdowns," he told CNN at his home in San Francisco's Bay Area.

And he points a finger at Hollendorfer, who in the last eight months has bought three horses that he previously owned. Two of them are now dead. They were badly injured in training or a race and were euthanized.

He has a special memory of a horse called Kochees, who would sway his head in acknowledgment when offered a carrot. "Smart, sweet horse," Herbertson said.

Hollendorfer and a partner bought Kochees after Herbertson entered him in a "claiming race" where the horses are offered for sale at a certain price and must be sold if someone wants to buy them.

Herbertson says he was about to give the 8-year-old horse -- a veteran in racing terms -- a break but decided to enter him in the claiming race in November. "He definitely had some nicks and needed time off," Herbertson told CNN.

Kochees died after a race at Santa Anita on May 25. The necropsy is under seal as part of the CHRB investigation.

Hollendorfer refused to speak to CNN, saying by telephone last week, "Don't call me again." After Kochees' death, Hollendorfer told the Associated Press: "We thought he would run real well, we thought he would win... In my mind there is absolutely no doubt that we've done every single thing properly with Kochees and all the rest of our horses, too."

Hollendorfer's fellow trainer, Bob Baffert, defended his friend last week. "What people don't understand is Jerry felt really bad when he lost those horses," Baffert told CNN. "He does take really good care of his horses. But I don't know ... he runs lower quality. Sometimes they can be... It's tough," he said, his voice trailing off.

The Jockey Club, The Stronach Group and others say the excessive medicating of horses could be causing problems and leading to animals dying.

On its website, The Jockey Club states: "Improper drug use can directly lead to horse injuries and deaths. Horses aren't human and the only way they can tell us something is wrong is by reacting to a symptom. If that symptom is masked, the results can be devastating."

Dr. Sue Stover, a professor and veterinarian from UC Davis, says that more than 85% of horses that break down on the track had a pre-existing issue that was exacerbated.

Vets check every horse before it races at Santa Anita. But if that horse is medicated, the vet might not detect an issue that could later prove fatal.

The Stronach Group's Friedman said that is why they have now banned most medications at their Californian tracks within 48 hours before a race or training session.

"Stopping the potential masking of injuries. That is how you are going to reduce these numbers," he said.

Santa Anita officials have taken some action against trainers this year, ordering two to remove their horses. One of them, Mike Pender, is also now serving a 30-day suspension from the CHRB after training a horse with a fractured leg at Santa Anita and then shipping him to race at Golden Gate Fields. Pender declined to speak to CNN until after his suspension was over.

Trainer Billy Morey is under investigation after the cameras that are now in every barn at Santa Anita caught an assistant allegedly doping horses at the end of March. Morey denies the charge. He declined to speak to CNN.

If horses are being pushed too far, there could be culprits beyond the trainers, said Cassidy of California Thoroughbred Trainers.

"I mean yeah, people like pushing," Cassidy told CNN. "Especially owners. They don't want to pay for them [horses] sitting out at some farm and not making any money." Cassidy says officials met with a group of jockeys last week.

"The jockeys are concerned, you know, 'I'm riding for a big guy I don't want to scratch the horse if he doesn't feel 100% because the guy will fire me or get mad at me,'" Cassidy said. "So, we've explained to the riders, 'Look, you blame it on the veterinarians.' You just say, 'Hey, the vet said no.'"

Horse deaths are not just a Santa Anita issue -- The Jockey Club estimates that 10 horses died on American race tracks every week in 2018.

Baffert, who is based at Santa Anita and won the Kentucky Derby last year, is among those who say getting the death rate down to zero is almost impossible.

"That's gonna be tough, to get it to zero, because it's sport," he said. "That's just like saying, you know, Kevin Durant's gonna be free of injuries... All these athletes. They're taped up, they're well-trained, best coaches. Still, they step wrong, they're gonna get hurt, twist an ankle."

And however strong the new rules are in California, that doesn't solve another problem, seen as fundamental by The Jockey Club: there is no national body that oversees this sport. Horses can be raced under the jurisdiction of any one of the 38 independent governing bodies.

"You go to a different state, you don't know what the rules are," says Cassidy of the trainers' association. "So, if it was uniform across the country, it would be great." The Jockey Club is pushing a Congressional bill that would create an independent, national body to oversee racing.

Opponents of horse racing say the actions at Santa Anita and the broader push by The Jockey Club are just not good enough.

The Jockey Club number of horse deaths comes from statistics voluntarily submitted by tracks. Patrick Battuello, an anti-racing activist who has been collecting fatality data for his Horse Racing Wrongs website since 2013, believes the real number is much higher.

"We have documented over 5,000 confirmed kills on US tracks just since 2014," Battuello told CNN. "It's not a particular trainer problem. This is an industry-wide problem. This has been going on since the very beginning. And only now is it being exposed for what it is."

CNN has not been able to verify those statistics.

Battuello wants nothing less than an outright ban on horse racing in the US. "I'm telling you that over 2,000 horses are being killed every year," he said. "Even if they were to somehow magically halve that, would that be acceptable to the American public for, I remind you, nothing more than $2 bets and idle entertainment?"

Isolated to scattered showers and thunderstorms still possible on Friday

Aberdeen Parks and Rec not opening facility this summer