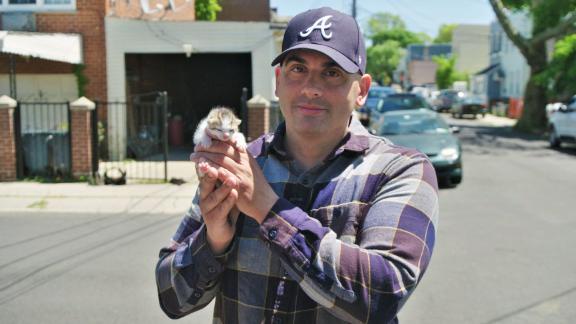 Paul Santell is on a mission to improve cats' lives and prevent a new generation of strays from living on the streets. His nonprofit trap-neuter-return efforts have earned him the moniker "Paul the Cat Guy."

It's a mission that sort of fell in his lap five years ago but has now earned him the moniker "Paul the Cat Guy."

"When I moved to Queens, I didn't realize there were so many cats," Santell said. "I knew nothing about animal rescue."

In the United States, there are 30 to 40 million stray or feral cats roaming outside and only about 2% of them have been spayed or neutered. These community cats produce around 80% of the kittens born in the US each year, adding to the overpopulation concern.

On his way home each night, Santell began noticing strays living in poor conditions. He started to feed one of them. That quickly became two cats, then three. Before he knew it, he was feeding a whole colony.

"After about two months of feeding them, I said, 'You know what? I want to do more to help them.'"

Santell attended an ASPCA class, where he learned about Trap-Neuter-Return, or TNR—defined as the humane and effective approach for managing community cats. Cats are trapped and taken to a veterinarian to be spayed or neutered and vaccinated. After recovery, the cats are released back where they were found or, if they're friendly, adopted.

"You learn how to use a trap. You understand what colony cats are. And once you get certified, you're able to use the free spay-neuter service at the ASPCA," Santell said.

A female cat can have an average of 180 kittens in her lifetime so fixing cats greatly reduces the stray population. Studies show that TNR improves the lives of feral cats, helps their relationships with people who live near them, and decreases the size of colonies over time.

Since 2014, Santell has been actively responding to reports of feral cats, pregnant cats and stray kittens. He has helped nearly 2,000 cats and has no plans to stop any time soon.

Every night after work, he travels around Queens, feeding the three cat colonies that he manages. And on the weekends, he traps stray cats across the city and adopts out socialized cats.

"This is all for the cats," Santell said. "I want them to have a better life. They deserve better."

Santell has grown a large social media presence as Paul the Cat Guy on Instagram and shares his nonprofit work with his followers. He also advertises his adoptable cats and takes requests from locals who need help with a stray cat in their neighborhood.

Earlier this year, he responded to a call about a sick cat living in an alley in the Bronx. After trapping her, Santell realized she might be adoptable.

"We weren't sure how she was going to be socially," he said. "But she just blossomed into this funny, rolling around cat."

The cat, named Lucy, now lives in Manhattan with her new owner.

"Knowing where Lucy comes from and what she's been through, I feel an extra responsibility to make sure she is happy and healthy and feels safe," said Belinda Luu, her adopter. "I'm so grateful that Paul found Lucy."

A handful of volunteers help Santell foster and transport cats. But he's largely a one-man-operation, doing this work in addition to his full-time job.

"A lot of times people ask me, 'Do you love cats?'" Santell said. "What I like to do more than anything is to save lives. It's the greatest feeling in the world."

CNN's Meghan Dunn spoke with Santell about his work. Below is an edited version of their conversation.

CNN: How much time do you spend on your nonprofit efforts?

Paul Santell: This is never-ending work. It can be 24 hours a day. It can be 365. Just when I think I have my projects complete, I get another request to go somewhere else. I have a full-time union job. And I trap full-time. Any given weekend, I'm putting in anywhere between maybe six to 12 hours trapping alone.

During the week you have to tend to the feral cats in the traps in the morning, you have to give them fresh food and water. Then I'm socializing kittens. Then I'm going through the social media. People want to adopt; I'm giving them applications. Then I'm answering requests for, "Oh, you have a colony over here. OK, you need some help." I see if I can advise them. If not, I add it to my list of TNR projects to do. And then I do my colony feeding at night. You don't stop.

CNN: You also encourage and help others to take on TNR projects.

Santell: I like to inspire others to at least do their block, their yard, their parents' yard. Just spread the word. That's really the goal of all rescues, because we're overloaded with requests, and we all just want to help all the cats. So, the more people that I can teach through either social media and direct messaging online, text messaging or going out to the field and teaching you how to do the TNR. That way, if everybody just did their yard, their block, their area, imagine if 1,000 people did it versus two dozen people just in one neighborhood—the population would be under control.

CNN: How does your adoption process work?

Santell: When a cat that I trap is truly friendly, I never put them back outside after the vetting process. I put them up for adoption. I consider myself pretty strict when it comes to adoption standards. We're looking for a solid, forever home.

It's so hard for me to rescue them from outside. I spend so much effort and time to just get them out of the situation, (so I'm not going) to hand them off to where they're not in an ideal situation. When one of our cats goes to a forever home, it's the greatest feeling in the world.

To donate to Paul the Cat Guy via CrowdRise, click here