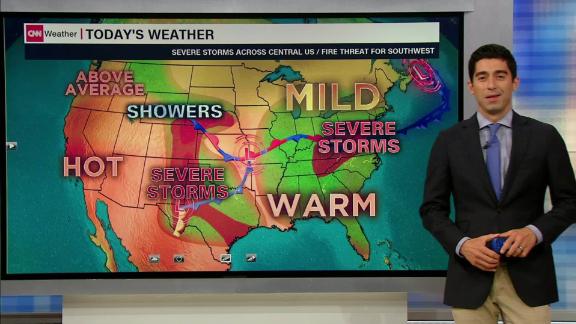 Severe weather across two portions of the US today. The first region we are monitoring is the Mid-Atlantic states where Philadelphia and the DC metro could see large hail and damaging winds, The other region is in the Plains from Southwest Texas into Nebraska;. Pedram Javaheri has the forecast.

Ready for a road trip with a purpose? Then check out this special interactive which highlights the South's most important civil rights sites. Here's what else you need to Get Up to Speed and Out the Door. (You can also get "5 Things You Need to Know Today" delivered to your inbox daily. Sign up here.)

It was calm today in Hong Kong after another massive protest in the city over the weekend over a controversial extradition bill with China. Organizers said about 2 million people took part in the march, which saw a sea of black-clad protesters fill the streets. (Police dispute that number, saying there were only 338,000 protesters.) The protesters want Hong Kong's lawmakers to pull the bill, which could make it easier for residents to be extradited to mainland China. They also want the city's chief executive, Carrie Lam, to resign. Today protest organizers called for strikes by both workers and students.

Is the US prepping for war against Iran? No, says Secretary of State Mike Pompeo, but he did say the US is "considering a full range of options," including military options, to deter and defend against Iranian aggression. Tensions are rising with Iran after two tankers -- one carrying oil and the other transporting chemicals -- were attacked near the Strait of Hormuz, a vital shipping route. The US and other nations blame the Iranians for the attacks. Meanwhile, Iran said it will make a "significant" announcement today about scaling back its commitments to the nuclear deal it made with the West. (President Trump has pulled the US out of the deal.)

The power is back on this morning after a massive outage left tens of millions of people in the dark for hours yesterday in Argentina, Paraguay and Uruguay. Was this the result of a cyber attack? Officials in Argentina don't think so, but an investigation into the "unprecedented" power outage, which also hit parts of Chile and southern Brazil, is just beginning. The blackout comes as concerns rise over governments' abilities to disrupt other nations' power systems. The New York Times reported that the US is escalating cyber attacks on Russia's electric power grid.

President Trump's re-election campaign hasn't even started (it officially kicks off tomorrow in Orlando, Florida) but already there's a shakeup. The campaign fired several pollsters after internal numbers showing Trump lagging behind Democratic candidates in key states were made public, sources told CNN. The President reportedly grew angry about the coverage of the numbers, which showed Trump trailing Joe Biden in states like Michigan and Wisconsin. The existence of the 17-state survey, which contained bad news for Trump in battleground states, was reported by CNN and others weeks ago.

Phoenix's mayor apologized over the weekend to a family that was arrested after a reported shoplifting incident at a store. Police drew guns on a couple and their two children after their 4-year-old daughter took a Barbie doll from the store. A 12-minute video of the incident last month shows a police officer kicking and yelling at a man as he's being handcuffed. Another officer appears to be pulling a gun on the passenger side of the couple's vehicle as a woman exits, holding a small child with a second child by her side. A police report says the incident escalated after the couple refused police commands. Mayor Kate Gallego said she was "sick" over what she saw in the video and called it "completely inappropriate and clearly unprofessional." She's calling for a community meeting tomorrow to talk about the incident.

On both the screen and the stage, Franco Zeffirelli was a giant. The legendary Italian theater, opera and film director died over the weekend at age 96.

Protective hard hats were required attire when the first Mass at Notre Dame Cathedral in Paris was celebrated since that devastating fire.

Nice to have friends

A music video for Taylor Swift's new song drops this morning, and it will reportedly feature about a million celebs.

They fell in love during World War II. It took 75 years, and a little help from journalists, but they were reunited.

'I speak for the trees'

The tree believed to have inspired Dr. Seuss' 1971 children's book "The Lorax" has fallen.

"My father buried his parents and sister with his bare hands ... he had to dig the grave himself. He was 13. This was all because of hatred. That's why I am always here to speak about it. Always."

Former Chelsea coach Avram Grant, talking about the horrors his father endured during the Holocaust. Grant has embraced a campaign led by Chelsea aimed at eradicating anti-Semitism from soccer and society.

The cute kitty just had to get a little bit closer to the source of all that good music. (Click to view)