Sarah Sanders failed in almost every aspect of the job 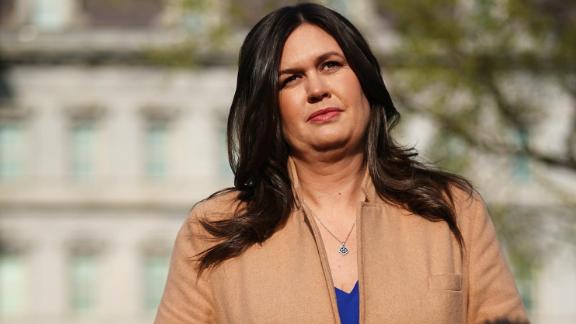 President Donald Trump tweeted that press secretary Sarah Sanders will be leaving the White House after more than three years of service.

Sarah Sanders said last December that when her role as White House press secretary ends, she hopes to be remembered as "honest and transparent." I'm afraid she's going to be remembered quite differently because of the actions of her boss, President Donald Trump, and her own failures to live up to the obligations of the office.

With Thursday's announcement that Sanders is leaving the White House at the end of June -- and looking back at the two years that she has spent there -- it's safe to say that her hopes were misplaced.

She has failed in almost every aspect of the job.

Let me use several examples to make that point. One job that the White House press secretary has is to promote the President's agenda and try to put the President in the best possible position to make his case. Just last week, the President did an interview in the American graveyard in Normandy with a highly partisan Fox News anchor. The President proceeded to desecrate the sacred ground by launching partisan attacks at his political opponents in the worst possible setting. Sanders' job was to anticipate what the President would say and make sure situations like this never happened.

The more important job is to keep the American public, the same public who fund her salary, informed through the traditional daily White House Briefing. For more than half a century, reporters, acting as proxy for the American public, would meet with the White House press secretary for a briefing almost every day. That came to a screeching halt under Sanders' watch. In fact, she has not done a briefing in 95 days and has only done eight briefings in the last 300 days. By contrast, in recent history, the most briefings that were ever done in a year were done in 1998, the year Republicans impeached President Bill Clinton, according to an analysis done by the American Presidency Project.

Many of my Democratic friends have argued no briefings are better than briefings where lies are told. I disagree. Briefings, even when the press secretary gives dishonest answers, allow reporters to surface important questions that the public has the right to ask. They also create a public record of the administration's response for historical purpose. That's one of the reasons I've been using Twitter every day to do a "Shadow Briefing," an exercise that highlights the many questions the administration refuses to address.

And, while we are on the question of honesty, this was another important failure of Sanders' tenure. Some of it was beyond her control. President Trump, as of April 26, according to the Washington Post, has made misleading or false statements more than 10,000 times since taking office. But to my memory, I can't point to a single time Sanders acknowledged when the President misspoke.

Her legacy of dishonesty is enshrined in the Mueller Report and is very telling. Many will remember the day she went after Former FBI Director James Comey, saying the White House had heard from many FBI agents who were critical of Comey's leadership. It was only when she was under oath and facing potential jail time did Sanders admit she made the whole story up. To be clear, she smeared a former high-ranking government official with a story that was made up from whole cloth.

But that's not the worst of it. When the Mueller Report was released, and she was no longer under oath, she backtracked on her story, reverting to key parts of the lie she'd already admitted to. That shows she lacked the moral character to be in such an important job in the United States Government.

Finally, Sanders' job inside the White House is supposed to include being an advocate for the press and pushing for maximum transparency.

Here, again, she failed. The normal channels of communication have been shut down. Now, government policy is routinely transmitted through at times incoherent and contradictory tweets. And one news outlet -- Fox News -- has been elevated to a position as partner of the administration, rather than functioning as a traditional newsgathering operation.

Given President Trump's performance with non-Fox anchors -- see Lester Holt and George Stephanopoulos -- it is somewhat understandable that Trump has talked with Fox News more often than with other news organizations. But it's the press secretary's job to make sure that all the media has access to the President, not just the ones who agree with him.

Only time will tell how much lasting damage Sanders has done to the Office of the Press Secretary. As for Ms. Sanders' ultimate legacy, I'll remember her as the press secretary who helped normalize the idea that the press is the enemy of the people. That's not a legacy to be proud of.

Hi: 73° Lo: 58°
Feels Like: 70°
More Weather
A little bit of disturbed air moves through our area on Thursday evening. This could give us a few scattered showers. Beyond that small chance, things look good in the weather forecast through our Saturday.

A slim chance for some rain on Thursday, beyond that all is good for several days

Church gives away over 700 boxes of chicken in Tupelo

Calhoun City woman has no power because of severe weather

Starkville looks to add juvenile curfew to the city