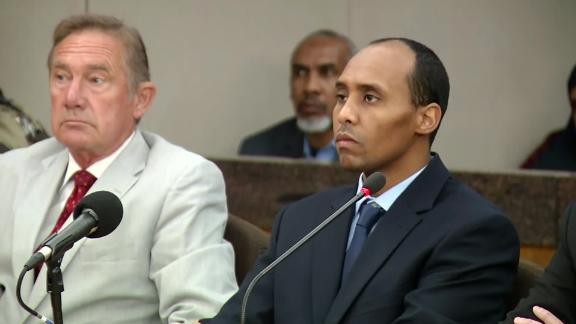 Former Minnesota police officer Mohamed Noor has been sentenced to 12.5 years in prison after being convicted of 2nd and 3rd degree manslaughter charges in the death of Justine Ruszczyk.

This op-ed has been updated with the news of Mohamed Noor's sentencing.

The sentencing of a former police officer in Minneapolis punctuates a case whose ripple effects raised profoundly uncomfortable -- and unanswered -- questions about race, policing and the use of force in the United States. The 12 1/2 year sentence he received Friday for the fatal shooting of Justine Ruszczyk is outrageous and disturbing.

Police are seldom -- if ever -- indicted, much less convicted, for shooting African American men. Yet, where the victim here is a white woman and the police officer is black, he gets the book thrown at him. This sentence is lengthy and unjust,and shows a capitulation by the judge against her oath to administer justice.

Mohamed Noor, a 33-year-old Somali-American, who was serving as a police officer with the Minneapolis Police Department (MPD) back on July 15, 2017, had been convicted of murder and manslaughter. According to local station WCCO, Noor has appealed the conviction.

"I've thought and prayed about this for two years, since the time I took" her life, Noor said before the sentencing. The state had asked for 150 months, while Noor's attorneys argued for a probationary sentence. During the hearing, Ruszczyk's fiancé, Don Damond, made an emotional statement: "I'm not sure how such a thing could happen to you, to us." Before announcing his fate, Judge Kathryn Quaintance said, "Good people sometimes do bad things."

A court should never succumb to the desire for vengeance. Officer Noor is the first officer convicted in Minnesota in such a circumstance. And he happens to be black. Coincidence? He had 44 letters submitted to the Court which spoke to his character, gentle nature and community service. His ex-wife even weighed in to inform the court of his humanitarian efforts and kind demeanor -- all to no avail. Even a local legislator wrote a letter urging the court to spare him jail. Nope.

During Noor's trial, the jury of ten men and two women heard from 60 witnesses over the course of a month, whose testimony included prosecution and defense "use of force" experts. Not surprisingly, these experts offered completely different opinions as to whether Officer Noor acted "reasonably" in discharging a single round of his service revolver into the abdomen of Justine Ruszczyk, who had called 911 to report a possible assault happening in an alley near her home.

From the defense perspective, Officer Noor was "startled" in a dark alley and feared for his life. In that darkness, he perceived a deadly threat as he sat in the passenger seat of his police cruiser, and saw someone approaching him and his partner, Matthew Harrity, who was way too close for comfort. Officer Noor's contention is that he fired upon the perceived threat in order to protect his life and that of his vulnerable partner, who was a sitting duck in the driver's seat.

The prosecution countered with a critical question that seemingly said it all: "What is threatening about blond hair and a pink T-Shirt?" And with that said, we as a society must address the elephant in the room: Race. Officer Noor is an African American man. Ms. Ruszczyk, the victim, was a white woman from Australia.

Every police shooting, like other cases, turns on its own set of facts. Those facts are often varied and murky. But despite the factual inconsistencies in some police shooting cases, there is generally one constant: the lack of accountability for the officer firing the weapon. Not in this case. Here, there was an indictment, a prosecution and a guilty verdict. So here's the obvious question: did the race of the officer and the victim play a role in the outcome? What are the moral questions involved in the prosecutor's invoking the victim's "blondeness" to imply she posed no threat?

How and why is it that Noor was convicted? When a white officer shoots an African American male, the results too often seem like fait accompli. In those instances, the officers are generally not even indicted, much less found guilty at trial. Some may be quick to contradict this claim by pointing to Officer Jason Van Dyke in Chicago, who killed Laquan McDonald on October 14, 2014. They may also point to Officer Michael Slager in South Carolina, who killed Walter Scott in April 4, 2015. But both of these examples are false comparisons. And in fact, they are not even close.

In Van Dyke's case, there was a stomach-turning video completely contradicting Van Dyke's narrative as to what occurred. His police report indicated that McDonald was lunging at him, but on camera, Van Dyke is shown firing repeatedly upon McDonald, even as he lies dying on the ground. In the absence of the video one wonders whether there would have even been a prosecution, much less a conviction? And for his crime, Van Dyke was only sentenced to six years and nine months in prison.

In South Carolina, Michael Slager shot Walter Scott in the back as he was running away. Thereafter, he planted evidence. Perhaps because the jurors could not believe their lying eyes, his case ended in a mistrial. It was not until the Justice Department intervened, and a sought a life sentence, that Slager pled guilty and accepted 20 years.

In Noor's situation, there is no video tape nor audio evidence. Both Noor and Garrity wore body cameras but they were not turned on and Noor did not provide a statement. In such a circumstance, the conviction of a police officer is unheard of. In fact, Mike Freeman, the prosecutor in Hennepin County, where Noor was tried and convicted, could not identify a single instance in Minnesota's history where a police officer was convicted in such a circumstance. Coincidence?

In fact, a year before this incident, also in Minnesota, Philando Castile was killed by Officer Jeronimo Yanez during a traffic stop. He was shot seven times even though he specifically told the officer that he had a weapon when he was asked to produce his license and registration. His girlfriend, Diamond Reynolds, who was in the passenger seat, looked on in terror -- as did her four-year-old daughter. Officer Yanez was tried on three felony counts and acquitted on each.

It seems the jury was persuaded that Officer Yanez legitimately feared for his life. The facts would not allow the prosecutor to ask the question that was asked in Noor's case, namely, "What is so threatening about a blonde?"

The uncomfortable questions about this case don't have good answers, but we must ask them nonetheless. Was Noor afforded the same deference by the jury as his counterparts of a different hue? Unlike other officer-involved shootings, this time, the person wearing a blue uniform was Somali, African American, and Muslim. Can't he be just as frightened as his fellow officers were when they discharged their weapons against unarmed black men?

And should a white suspect be viewed as putting a police officer at ease while a black suspect heightens an officer's fear and anxiety? How and why can a prosecutor argue so matter-of-factly that "a blonde in a pink shirt" is harmless, while a person with coarse hair, who happens to be black, represents a significant danger? How stereotypical is that? But that was the very argument made here -- and it was overwhelmingly successful.

Interestingly, the shooting also occurred in the district of Congresswoman Ilhan Omar, the first naturalized citizen from Africa, the first nonwhite woman from Minnesota, and one of the first two Muslim women, to serve in Congress. In that regard, society has come a long way. But it appears we have much further to go.

Every life is precious and every questionable police-involved shooting is gut-wrenching. We grieve for the family -- no matter the color. Police shootings provide police departments across the country with an opportunity to learn and to improve. In this case, police procedures were re-evaluated and revamped -- as was officer training.

But while revamping police procedures and training, we need to also revamp our cultural attitudes. The sentencing of Mohamed Noor is not even close to the end of this story. Yes, police must be held accountable for their unlawful transgressions. No one can ever be above the law. But the law must apply with equal force to police officers of every color and origin. Similarly, the way in which jurors evaluate these tragic police shootings should never turn on the color of a victim's hair or skin. Instead, the critical inquiry must continue to be whether the officer reasonably perceived a legitimate threat to his or her life. And that must always be a color-blind assessment.

We need to do some soul searching as a society to see how this could happen. Courts should promote justice -- not propagate injustice. And that's exactly what happened here.

This article has been updated to clarify that Justine Ruszczyk was shot in the abdomen, not the chest.

4 children were locked in makeshift cages, Alabama police say. 3 people have been arrested

All eyes on the dam at Oktibbeha County Lake, officials wait for weekend rain