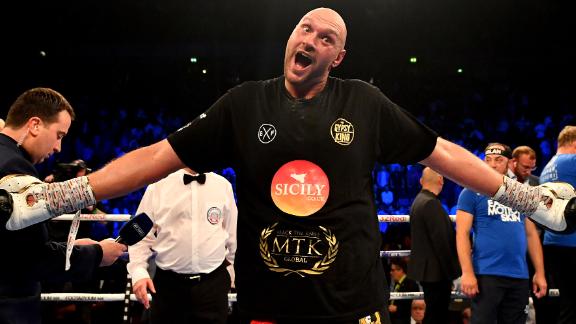 Former heavyweight champion Tyson Fury talks to CNN about his future, his weight and battles with mental health ahead of his fight against Tom Schwartz.

Braggadocio and trash talking -- where boxers taunt rivals to boost ratings and provide an alternative narrative for the media and fans outside of the ring -- are part and parcel of the boxing world.

When it comes to the art of verbal sparring there are few better exponents than Tyson Fury and following Anthony Joshua's recent surprise defeat by underdog Andy Ruiz Jr. in New York, the "Gypsy King" delighted in trading a few barbed comments with his main rivals in the heavyweight division in an interview with CNN Sport on Wednesday.

"I was delighted for the smaller fat kid," former world heavyweight champion Fury told Don Riddell, referring to Ruiz, who downed Joshua twice in the third round and twice again in the seventh in one of the biggest upsets in the sport's history. "Everybody has to go with the underdog.

"You see a big giant ripped in muscles and everyone expects the other guy to get knocked out in a round or two. I didn't because I knew how good Ruiz is."

Much has been made of Ruiz's physical condition for the fight, sharply juxtaposed by Joshua's chiseled body.

Despite Fury's less than complimentary remarks about Ruiz's body mass -- he weighed in at 268 pounds -- the British fighter has nothing but praise for the Mexican's boxing ability and credits the 29-year-old for "lighting up" the division.

"I'm happy that he's a fat guy. We're both fat," said the 30-year-old Fury. "He's an inspiration for all fat people out there.

"He's [Ruiz] just defied everything, the laws of ethics, because he came and he wasn't in great shape, he didn't look like a fighter and he knocked out this guy [who] looked like an Adonis."

Boxing promoter Eddie Hearn said on Tuesday that a rematch would take place in November or December when Joshua will attempt to regain the WBA, WBO, IBF and IBO titles from Ruiz.

However, Fury, who is looking to regain the world titles he forfeited in 2016, can only see one outcome -- another defeat for Joshua.

"Styles do make fights and if he [Joshua] could have done anything he'd have done it there and then that other night," said Fury.

"AJ didn't just get knocked out fluky, he got beaten up first and then knocked out."

When asked how he would have overcame Ruiz, Fury quipped: "Just give him a couple of chocolate bars in between rounds."

Speaking in the days after the fight, Ruiz pointed to the strategy he pursued to secure his stunning victory which made him Mexico's first ever heavyweight champion.

"The key of beating Joshua was the speed, the combinations, the pressure. I couldn't be scared," he told CNNE.

"All the people that he fights are scared so I didn't want to show no angry or no respect. I just wanted to go in there and let my hands go and make it a real fight."

Ruiz is now keen for the rematch to be held in his native country, which has never seen a heavyweight clash of this magnitude.

"I want all my Mexican people with me," he said.

READ: Boxing 'shooting itself in the foot,' says Dana White

Fury knows what it means to be the underdog after staging one of the most unlikely comebacks in sport -- returning from severe mental health issues and drug abuse to once again be a contender in the heavyweight division.

"Eighteen months ago, I didn't ever envision that I'd be back at this position, on the verge of suicide not wanting to live anymore," said the British boxer.

"I think when you give up the ambition to live you're in a bit of a dark place I'd say."

Due to his two-year absence from the sport, the 30-year-old Fury faced issues with his weight. He weighed 276 pounds in his first comeback fight in 2018, where he easily beat Albanian boxer Sefer Seferi, but dedicated himself to an intense training regime to get back in proper fighting shape.

Fury is now using his comeback to spread awareness of dealing with mental health problems and wants his journey to be an inspiration for others suffering in silence.

"If I can come back from it then anybody else can. I'm no special person, just a human being made of blood and bone," he said.

"But it's not what brings you to your knees, it's the character you show that makes you get back up again."

Nonetheless, Fury admits he is still struggling daily with his anxiety and depression.

"I liken mental health to a famous song The Eagles wrote called 'Hotel California,'" he said. "There's a verse in that called 'you can check out anytime you want but you can never leave.' And that's mental health.

"You can check out and get help any time you want. But if you don't maintain and manage your mental health problems then it'll never go away. It never does go away."

Since Joshua's defeat, Fury believes the heavyweight division has become a two-horse race between himself and American fighter Deontay Wilder.

The pair slugged out a highly controversial draw in December and a rematch has been penciled in, though no date has been set.

Ahead of that fiercely anticipated rematch, Fury will take on German Tom Schwarz in Las Vegas on June 15.

"You can never look past any opponent as we saw last Saturday night," said Fury, referring to Joshua's defeat.

"So I must focus and give all my energy to this fight. I'm not interested in Deontay Wilder or anybody else, only Tom Schwartz."

Despite insisting he hadn't thought of Wilder in recent months, Fury was keen in his CNN Sport interview to deliver a few verbal combinations for the undefeated American to ponder.

"I don't think about him in the morning, or in the afternoon, or in the evening. He's nothing to me but a bad bum in the shower," he said, vowing to beat Wilder whenever they next meet.

"That's all Deontay Wilder is. A little known world champion in his own country. That's what he is, a bum."

Previously Wilder insisted he is too dangerous for Fury and is looking forward to the rematch.

"I have definitely got his number in a rematch. We are going to see who has got whose number. I am not worried about nothing," Wilder told talkSPORT earlier this week.