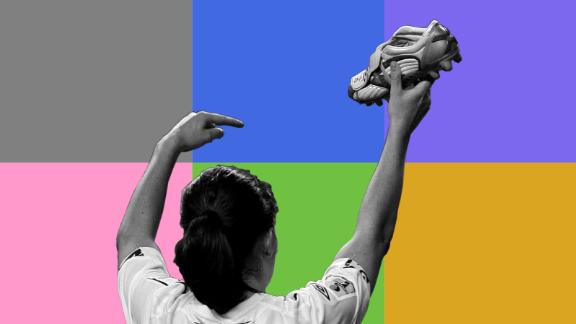 We asked female footballers, from World Cup winners to amateurs, to send videos from a day in their lives to show how women around the world live the game.

To celebrate the start of the 2019 Women's World Cup, we asked female footballers around the world to record a day in their lives. In the video at the top of this page, they tell us their stories.

The Women's World Cup, billed as the most competitive edition of the tournament yet, begins in Paris on June 7, when host France takes on South Korea at a sold out Parc de Princes in Paris.

The 'In Her Shoes' participants

Julie Ertz: Aged 27, defensive midfielder Ertz has made 82 appearances for defending champions the U.S. The Chicago Red Stars player has already won the Women's World Cup, doing so when she was the second-youngest member of the squad in 2015. "It's going to be such an amazing tournament," Ertz told CNN Sport earlier this year of the Women's World Cup. "I can't even pick one [favorite]. There are going to be so many great teams and so many great games."

Yasmeen Shabsough: The 23-year-old lives in Amman, Jordan and has been playing competitively for nine years. The center-back, who is a sports development officer, describes football as "an international language everyone can speak despite all our differences."

Ashley Hall: Football has taken the 29-year-old around the world, from the US to England, Iceland and the UAE. The Thai-American striker currently plays football in Belgium for FC Femina White Star Woluwe and works as a special education coordinator at an international school.

Sandrine Dusang: The former France international lives in Montpellier and works as a journalist for Foot d'Elles, a specialized women's football website. The 35-year-old has played for Olympique Lyonnais, winning the women's Champions League, and has made 47 appearances for the national team. She has taken part in a number of initiatives which, she says, "promote women's football and defends the conditions of women in sport, business and society" such as Equal Playing Field, an organizations which aims to advance women's equality in sport.

Ini Umotong: The striker plays for English side Brighton and Hove Albion and has made seven appearances for Nigeria. The highly-rated forward, 25, was in the Super Falcons' provisional squad for France 2019 only to have her tournament dreams dashed when the squad was announced last month. The former Birmingham City and Oxford United player has a First Class Honours degree in Economics from the University of Southampton.

Yumon Masri: For the last five years, the 25-year-old has been a football coach at Palestine: Sports 4 Life (PS4L). "I'm using football as a form of social change, targeting hundreds of girl, developing their life skills through sports," Yumon told CNN Sport. "Since my childhood I've been playing football. When I play and coach I can forget problems and I feel free. It gives me ultimate satisfaction and makes me feel equal. It's a passion."

Brina Micheels: Sixteen-year-old high school student Micheels has over 64,000 Instagram followers thanks to her breathtaking football skills. "After school I do my homework and think about the skill I'll be working on for my Instagram account," she told CNN Sport. "I've committed myself to learning a skill a day and found that a little bit of training each day was so important. I saw my touch on the ball improving, my speed of play was getting faster and I was more confident and creative on the field."

Katie Rood: The 26-year-old New Zealander narrowly missed out on being selected for France 2019. The former Juventus striker currently plays for English side Lewes and made her international debut for the Football Ferns in 2017, going on to win eight caps.