Seth Moulton: Nobody should fear talking about mental health challenges in America 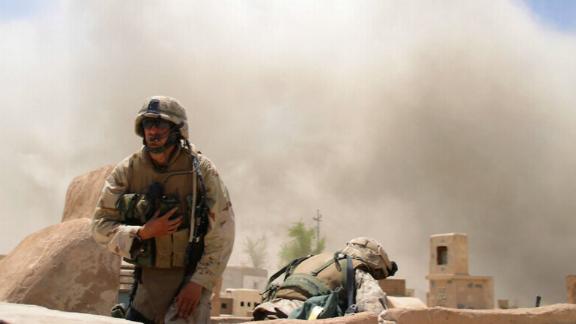 It's taken me a long time to say that. For years, I didn't tell my friends and family because I didn't want them to see me as broken, or damaged, or through the lens of the stigma associated with mental health challenges. My team didn't know, and given the nature of my job, they know pretty much everything. Even my parents didn't know.

I didn't share it with the public either because, honestly, I was worried about the political consequences. My PTS is under control; I no longer think about the worst moments of the Iraq war every day, the bad dreams no longer wake me up at night, and I don't find myself struggling with the feelings of guilt and aimlessness that plagued me when I first came home from Iraq. But despite all of that, I feared that if I told my story, there would be headlines calling me unstable or unable to lead.

For a long time, the only group I shared my struggles, in-depth, with were the Marines from my platoon. Many of them were struggling -- with PTS, depression, anxiety, and with the decision about whether or not to get help -- so I told them that I'd seen a therapist in the hopes that they would do the same. I was inspired by them because a few, younger than I, had shared their stories with me first.

It has helped all of us to talk. And talking has helped us get whatever help or support we've needed. This was how I first began to fully understand the impact that sharing these stories can have on others.

I also began to understand just how widespread these issues are, for veterans and civilians alike. Most of the veterans I know have struggled with mental health in one way or another. Twenty veterans commit suicide every day, and half of the veterans who struggle with mental health don't seek help, according to the Department of Veterans Affairs. The same is true of civilians. More Americans kill themselves each year than die in car accidents, according to the CDC. And more than 50% of American adults who struggle with mental illness don't get the care they need, according to a report by Mental Health America.

Not long after I talked about post-traumatic stress privately with my platoon, I started hosting veterans town halls with Sebastian Junger, the author of books like "War and Tribe," who served as a combat reporter in Afghanistan. The town halls are a place where veterans can share their stories, good or bad, with fellow vets and civilians. As Junger puts it, "No one goes to war and returns home unaffected. It's not fair -- or healthy -- for veterans to be left alone with these burdens." So we gave veterans a place to share.

At each event, I saw fellow veterans explain how their experiences overseas affect their lives back home. Many took on the stigma around mental health and told the stories they least wanted to tell -- about friends they had lost, guilt that remained with them decades after combat, post-traumatic stress, and more. But I also heard the good stories. Those same veterans talked about how they'd been proud to serve our country, how they missed doing so, and how they made the best friends they ever had in war-torn places around the world.

The same goes for my friend Jason Kander's article last October about his own struggles, and for Junger's moving speech about his. Our particular experiences and symptoms are different, but our stories have a lot in common. The main difference is that they were sharing their full stories, and I wasn't.

As I began running for president, I knew it was time for that to change. One of the first things you learn in the Marines is that if you're going to lead, you need to lead by example. On this issue, for years, I hadn't had the courage to do that. But I'm trying to make up for that now.

In this past week, I have held additional veterans town halls, this time with an explicit focus on mental health. I've put forward a set of policies that would address mental health challenges for veterans and civilians alike, by making mental health care as normal and routine as going to the doctor for your yearly physical. And for the first time, I've spoken publicly about my post-traumatic stress and going to therapy.

Despite my fears, there weren't any headlines saying I was crazy or unfit to be commander-in-chief. My team didn't decide, all of a sudden, that I couldn't lead them. My family didn't think I was broken or damaged. In fact, the response has been overwhelmingly accepting and understanding. In truth, I believe going through this struggle has made me stronger. Much to my surprise, it seems like others see that, too.

That stigma held me back for a long time. But now that I'm running for president, I hope to help end it.

Hi: 88° Lo: 63°
Feels Like: 66°
More Weather
Thursday will start off once again in the unseasonably cool 60s. We will top off just a few degrees warmer on out Thursday, in comparison to our Wednesday. Most of the high temperatures will be in the lower 90s.

Interview: Back to school in Tupelo - superintendent Dr. Rob Picou

Interview: Back to school in Tupelo - Milam Elementary parent

Interview: Back to school in Tupelo - Rankin Elementary principal

Interview: Back to school in Tupelo - Milam Elementary