Airbus A300: Plane that launched an empire 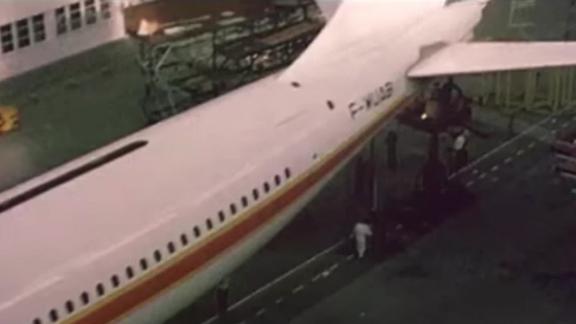 The story of the Airbus A300 program which, in 1969, launched the aerospace manufacturing dominance of the European company Airbus

This year, around 4 billion plane passengers will take to the sky -- and most of them will travel in an Airbus or a Boeing.

These two Goliaths have dominated aerospace manufacturing for half a century, with few competitors coming close.

While US company Boeing, the world leader, has been around since 1916, its European rival Airbus emerged much later.

In the years after World War II, American companies dominated the aviation industry and so, in the late 1960s, a consortium of European aerospace manufacturers, then known as Airbus Industrie, came together to develop a challenger.

On May 29, 1969, at the Paris Air Show, an historic agreement was signed between the French Minister of Transport Jean Chamant and the German Minister of Economic Affairs Karl Schiller.

Airbus Industrie would develop the world's first wide-body twin-engine jet airliner, the Airbus A300. It was a plane that would launch an empire.

There were a couple of innovations that made this plane special. The wide body and raised cabin floor meant it could carry passengers and cargo at the same time, allowing airlines to increase profitability.

The wings, designed by Hawker Siddeley, gave the airplane enough lift to climb faster and attain a level cruise altitude sooner than other passenger aircraft of the time, giving cabin crew more time for the in-flight service.

It could hold 270 passengers and, with a range of 1,200 nautical miles, was designed to serve the short- to medium-haul market.

Because it had two engines rather than the standard three, it was lighter and more efficient than its contemporary US rivals, such as the Lockheed L-1011 TriStar and the McDonnell Douglas DC-10.

Construction was a pan-European exercise.

The wings were constructed in the UK, then transported to Bremen, Germany. to be fitted with moving surfaces. They were then shipped to nearby Lemwerder, Germany, where they -- along with the rear fuselage sections -- were flown to the final assembly line in Toulouse, France.

The engines came from the US, the tail assemblies from Spain, while the central wingbox and nose were built in the French towns of St Nazaire and Nantes.

The road convoy of parts to the assembly line attracted curious crowds -- an Airbus tradition that would continue through the decades, with people regularly turning out to see the components arrive for the mammoth A380.

The A300B was unveiled to the French public on September 28, 1972, in a joint ceremony with another European plane which was to make history: the legendary, supersonic Concorde.

The A300B made its first flight one month later, in October 1972, landing in high crosswinds that tested the mettle of pilots Max Fischl and Bernard Ziegler.

The plane entered service with Air France in May 1974. Sales were slow at the start, and it was unclear whether the European start-up would survive.

Three-engine planes were still the industry standard, and there was skepticism whether two engines could safely carry passengers over long distances.

A lifeline appeared in 1977 when the US-based Eastern Airlines gave them a shot by leasing four planes for six months. The company ended up buying those craft and ordering 19 more.

The A310 was a shorter, longer-ranger aircraft than the 300, seating 218 in a two-class configuration.

The A300-600, meanwhile, introduced an improved wing featuring a recambered trailing edge.

The A300/A310 would spawn many variants, but two stand out as the most exciting.

There's the Airbus A300 Zero-G, a reduced-gravity aircraft used for training astronauts. And then there's the A300-600ST Beluga, a huge, whale-shaped cargo freight version of the A300-600, used to transport Airbus parts from factory to final assembly line.

"The legacy of the A-300 lies in the innovations and their applications ... in the fields of composite structures, wing tips (for drag reduction), electrical signaling for secondary controls [and] control of center of gravity," says Ruxandra Botez, Canada research chair in aircraft modeling and simulation technologies at the University of Quebec.

It was the first passenger aircraft to use composite materials, with fiber-reinforced plastic being used in its tail fin.

Its "successful demonstration of the wide body twin-jet configuration," says Luigi Martinelli, associate professor of mechanical and aerospace engineering at Princeton University, led to it becoming "the de facto standard."

"The wing design was quite advanced for the time as it is concurrent with the introduction of supercritical airfoils, and the adoption of other novel technologies," he adds.

The introduction of a two-person cockpit eliminated the need for an on-board flight engineer, and it also pioneered fly-by-wire control, improving handling and safety.

In 1977, the A300B4 became the first ETOPS-compliant aircraft. The draw for this with customers was that it qualified for extended twin-engine operations over water, offering more versatility in routing.

"The initial shortcoming of the project was probably a lack of understanding of the market," says Martinelli. "I think it is fair to say that the A300 was saved by the ETOPS certification, which opened up a viable market for the plane."

Guillaume Faury, the CEO of Airbus, said in a statement marking the 50th anniversary, that Airbus "has been a showcase of European integration."

While the collaborate European project it was unveiled alongside, the Concorde, has captured the public imagination more, the A300 has made its mark as a reliable workhorse.

Today, they're mostly used as freight aircraft, with UPS Airlines and FedEx Express its biggest operators.

UPS Airlines Captain Mark Melder tells CNN Travel, "As a captain on the A300 for 17 years, I am a true fan and advocate for the aircraft. Its reliability, performance and comfort have proven it to be a pilot's aircraft.

"Things are only going to get better for those of us that fly the A300, as we are in the process of modernizing the flight deck. This will keep us flying this tremendous aircraft well into the future."