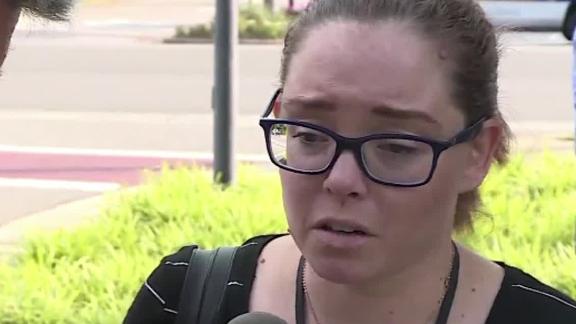 A witness describes the scene in Virginia Beach, Virginia, where a shooting has left at least 11 people dead, according to police.

Megan Banton scrambled to call 911 when she realized the loud bangs at a municipal building in Virginia Beach, Virginia, were not a drill. Within seconds, all she could hear was yelling, screaming and muffled gunshots.

"I have an 11-month-old baby at home, and all I could think about was him and trying to make it home to him," Banton, an employee at the city's public utilities office told CNN affiliate WTKR.

Banton was in the second floor of the three-story brick building when police said a city worker opened fire in Building 2 of the city's Municipal Center on Friday, killing at least 12 people.

She and about 20 of her colleagues quickly pushed several desks against the doors in their office before rushing to hide in their bosses' office.

They hunkered down, hugging and holding each other, as the gunshots continued.

"I was trying to listen to what happen and listen to 911 (operator), and we just hoped it would be over soon," she said.

Zand Bakhtiari's boss had just left to go home when Bakhtiari heard someone screaming in the parking lot. Shortly, his boss called, saying there was a gunman in the building.

"I mainly texted my loved ones, and a couple of minutes after that I just heard rapid gunfire," Bakhtiari said.

He said police officers took him to another building and he didn't see the shooter.

Some inside, like Edward Weeden, were initially unaware of what was happening.

"There was a lady on the stairs, unconscious, blood on her face, blood on the stairwell," Weeden told CNN affiliate WAVY. "We didn't know what happened."

He fled when a colleague ran downstairs and urged him to leave the building because someone had been shot.

As police tried to stop the gunman, employees and residents hid under desks in public works and utilities offices or ran away to nearby buildings.

Alyssa Andrews was in her car with her 1-year-old grandson when she spotted a man with a bloodied shirt and shorts outside the building. The man's identity and his condition were not immediately known.

Police had blocked the streets outside the municipal building and she and her grand stayed in their car until they were taken to another building to take shelter.

"I couldn't believe it was happening. I was so afraid because they were circling the building. And I just — I didn't know what to do," she said.

Virginia Beach Vice Mayor James Wood said the shooting is "without a doubt the most horrific thing that our city has experienced."

"The people that were there, the victims are people we've worked with, people we know. They're our friends. It's just really truly horrible," he added.