Champions League final: Thousands flock to Madrid -- but can they get a ticket? 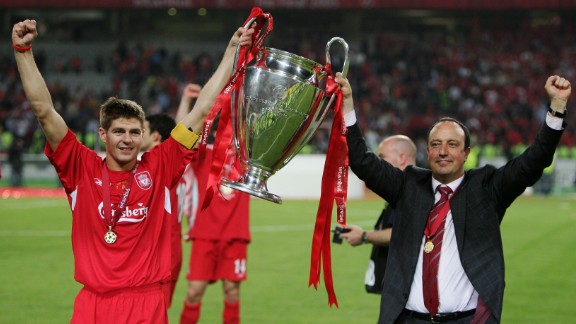 With Liverpool looking to win the Champions League for the first time since 2005, CNN sits down with the mastermind of that famous win, Rafa Benitez.

Liverpool and Tottenham fans have gone to extreme lengths to ensure they don't miss out on Saturday's Champions League final in Madrid.

In the sweltering sun, the Spanish capital's Plaza Mayor swells with a mix of red and white shirts. The atmosphere remains relaxed, but excitement crackles beneath the surface.

Pockets of fans spontaneously break out into song, some in homage to Virgil van Dijk, Liverpool's totemic defender, others are eulogizing Spurs captain Harry Kane.

Those in red are dreaming of a sixth European Cup, while Tottenham fans -- who last celebrated a piece of silverware in 2008 -- are in uncharted territory.

Authorities estimate that as many as 100,000 English supporters could descend on Madrid on Saturday alone.

With the Wanda Metropolitano -- the venue for Saturday's final -- holding only 68,000, that leaves tens of thousands of fans without a ticket. Some are hopeful, some are pessimistic. Others are desperate.

Nine thousand flights are expected in the UK airspace on Friday, topping the previous record of 8,854 set in May last year.

NATS, the UK's leading provider of air navigation services, says that an additional 800 flights have been put on between Friday and Sunday in order to cater for the Champions League final, the first all-English final in over a decade.

Airlines and hotels have been widely criticized for raising prices for the weekend of the final, but shrewd football fans have found ways around the extortionate costs.

Owen, 24, fan of five-time winner Liverpool flew from the English city of Newcastle, 175 miles from his hometown Formby, to the Spanish island of Ibiza for a two-day layover, before arriving in Madrid on Thursday.

Despite booking the flights just 10 days ago, he says the return journey cost him just £78 [$98].

"I've been really savvy with how I do it," he told CNN. "When I was in the airport in Ibiza, I bumped into these two lads and I ended up staying in their hostel for two nights.

While 4,000 tickets were available to all football fans worldwide via UEFA's website, Liverpool and Tottenham were each allocated 17,000 tickets. The remainder were allocated to the local organizing committee, footballing associations, commercial partners and broadcasters.

According to reports, tickets are being sold for as high as $31,000 and despite making the journey out, Owen has no intention of going to the final.

"I haven't got a ticket and I haven't got three grand to buy one either," he says. "I don't want to go to the game, I'm old fashioned in the sense that if you pay ridiculous money for a ticket, you're the issue.

"These tickets are ridiculous prices anyway, some of them are up to €500 [$557] and that's just from the official site.

Another Liverpool fan, Danny, confidently bought flights to Madrid for £80 [$100] back in March when Liverpool beat Bayern Munich in the Champions League round of 16. He and two friends are crammed into one room to reduce the cost of accommodation.

Friends Kenny and Paul, both 35, flew out together but only have one ticket between them.

"If I can't get him a ticket, mine is gonna get sold," Paul tells CNN. "I don't wanna leave him by himself, he's come with me."

While many fans from the UK have endured convoluted journeys to reach Madrid, Joe, 64, has traveled further than most.

A native of Washington DC, he became a fan of Tottenham Hotspur while living in London back in 1972.

He and fellow Spurs fan Chris met through a mutual friend at the 2006 World Cup in Germany and the pair, along with 12 others, have split the cost of a £7000 [$8831] Airbnb over three nights.

Another member of their group, Callum, took a direct flight from London to Madrid but is flying back via Morocco. They all have season tickets at Spurs' new stadium and were fortunate enough to get tickets to the final at face value.

"All four of us have tickets to the game ... but not on us," Joe tells CNN. "Safely tucked away. We don't want to get mugged in the street!"

Matt, 23, has traveled to Madrid with his parents, Paul and Tara. The family avoided an expensive journey, flying via Milan and renting a farmhouse 50 minutes outside of Madrid, but arrived in Spain in hope of three tickets, rather than expectation.

"We've got people flying in from Tel Aviv tomorrow (Saturday) and how many tickets we've got, we don't know," Paul, 55, explains.

If they only get one, there won't be a family feud to decide who goes to the Wanda on Saturday night.

Some rain lingers in here for a few more days

Girls and Boys Playoffs - First Round