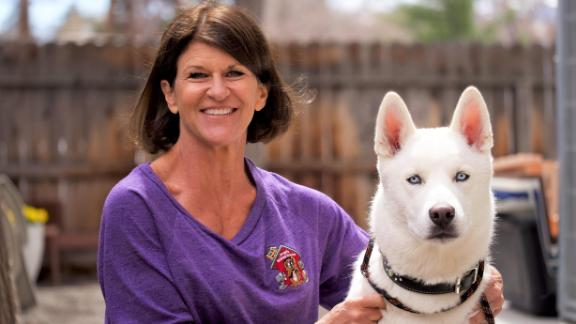 Fewer than 10% of domestic violence shelters offer services for pets. That's why Staci Alonso opened Noah's Animal House, allowing women to keep their pets close as they get back on their feet.

Staci Alonso knows first-hand the powerful bond that can exist between a woman and her pet.

In 2004, when she was serving as a board member of a women's shelter, she discovered that women fleeing domestic abuse often had nowhere to go because shelters wouldn't accept their pets.

Domestic violence is a leading cause of injury to women in the United States -- one in four experience intimate partner violence in her lifetime. Yet fewer than 10% of domestic violence shelters provide some sort of pet service, such as placement in a nearby foster home or boarding at a local animal shelter.

"My two dogs ... were my rock and my reinforcement," Alonso said. "I couldn't imagine being in that type of situation, finding the courage to leave and having to leave them behind."

Alonso was also shocked to learn that in many cases, without family to stay with or money for a hotel, women go back to their abusive situation to remain with their beloved pet.

"We can't make it this hard for a woman to leave an abusive relationship just because she has a pet," Alonso said.

To help break this barrier, in 2007, she opened Noah's Animal House, a full-service pet shelter located right on the grounds of a domestic violence shelter in Las Vegas.

It was the first of its kind in the country -- having cat condos, indoor and outdoor dog runs, a vet station and a grooming station all together in one facility.

"They check in to the women's shelter, and the pets are right next door at Noah's," Alonso said. "And they're free of abuse and safe."

When Jennifer decided to leave a physically and emotionally abusive relationship, she sought out a domestic violence shelter that allowed pets. She found Noah's, and it took Jennifer and her cat a four-day bus ride to get there.

"When I got to Noah's and they took my cat in, and I looked around that place and I was like, 'Okay, we're good.'"

CNN is not using Jennifer's real name at her request for her safety.

Women can visit and take care of their pets as often as they'd like. The shelter also has "cuddle rooms," set up like living rooms, where women can spend time with their pets.

"You know the power of the pet when you watch the woman come through the doors and you see the anxiety on her face -- and then they see their pet. You look back at the woman and all of the stress is gone," Alonso said.

Noah's House has a staff and volunteers who help take care of the pets while the women are looking for jobs, going to therapy or taking care of themselves.

"My abuser told me if I leave I was never going to make it. I had been playing that dangerous tape in my head, and I've got to get rid of it," Jennifer said. "My cat helps me with that. He lets me know that I am wanted, and I am loved."

Women have traveled from 21 states to get to Noah's Animal House.

"I've seen the powerful impact of women getting their courage back all because they had the reinforcement of their pet by their side," Alonso said. "Everybody deserves this chance. I want to remove the 'No Pets Allowed' sign on all the domestic violence shelters' doors."

CNN's Meghan Dunn spoke with Alonso about her work. Below is an edited version of their conversation.

CNN: How many pets has your group helped?

Staci Alonso: Since opening in 2007, we have cared for over 1,400 pets at Noah's. And that equates to 90,000 boarding nights. Some pets have stayed as long as a year. The average stay, in good times, is six weeks, and in financially difficult times, it's three months. When you compare the woman with her pet at Noah's to a woman who doesn't have a pet -- they have the reinforcement of "I can do this," because of the unconditional love of their pet. You see it every day when the two see each other. And I think anybody who has a pet knows that they make you feel better.

CNN: You do so much more than just house the pets.

Alonso: Our model at Noah's is to remove any level of stress that the woman could experience and treat the pets like they were checking into a boarding facility or a hotel. So, our services include the food; and if it's prescription food, then we get the special diet food. We take care of any medical need that is required -- the vaccinations, spay and neutering. And when the women leave, we give them a to-go package and it's a kennel or a crate, beds, toys and food for the month. We also give them a gift card for that next round of food, or litter, whatever they need. We take care of everything.

CNN: What's the inspiration behind your shelter's name?

Alonso: Noah's Animal House is named after my son. It was four or five years after he was born that we started working on a pet shelter. It was having my son know from very early on that there was this sense of purpose for him. I strived to make sure that it was never really about his name on the building; it was about the responsibilities that went with that name. And I dragged him to construction meetings and media interviews and meeting women. It's setting it up to always live on.

Alonso: My favorite room is probably everybody's favorite room. It is our cuddle rooms. I wanted to make sure that the women had an opportunity to cuddle and feel normal. They're little living rooms. The funniest part is when you look inside, and you see the dog is on the couch, and the woman is on the floor. And you go, 'Oh yeah, I can relate to that.'

We have a sign-in board, actually, because the cuddle rooms are everybody's favorite. The next Noah's, we'll need to double the amount of cuddle rooms, because it's a good place to hang out.

Want to get involved? Check out the Noah's Animal House website and see how to help.

To donate to Noah's Animal House via CrowdRise, click here