She was the world's smallest baby. Now she's a healthy infant 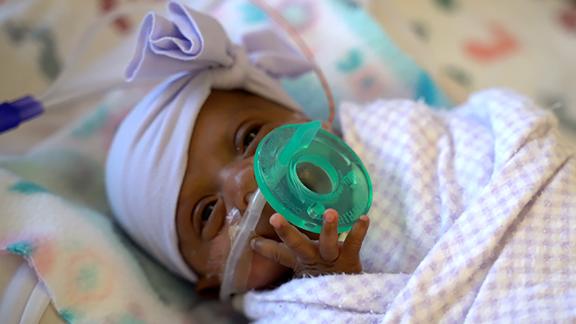 Baby Saybie was born at 23 weeks weighing 8.6 ounces. Now, the world's smallest surviving infant has been released from the hospital and is heading home.

The smallest surviving baby in the world left the hospital five months after she came into the world at a San Diego, California hospital.

Baby Saybie was born at 23 weeks and three days last December, weighing in at just 8.6 ounces about the weight of a large apple -- making her the smallest surviving baby in the world, according to officials at Sharp Mary Birch Hospital. She was released from the hospital earlier this month weighing 5.6 pounds, CNN affiliate KSWB reported.

"After experiencing severe pregnancy complications, Saybie's mother gave birth via emergency cesarean section at 23 weeks, 3 days gestation in the womb," the hospital explained at a news conference. "Doctors said the preterm birth was necessary after they found that the baby was not gaining weight and her mother's life was at immediate risk."

Saybie was deemed the world's smallest surviving newborn by the Tiniest Babies Registry that is maintained by the University of Iowa. According to the hospital, she weighed 7 grams less than the previous smallest baby, who was born in Germany in 2015.

Correction: A previous version of this story incorrectly stated that baby Saybie was released from the hospital Wednesday. She was released earlier this month.