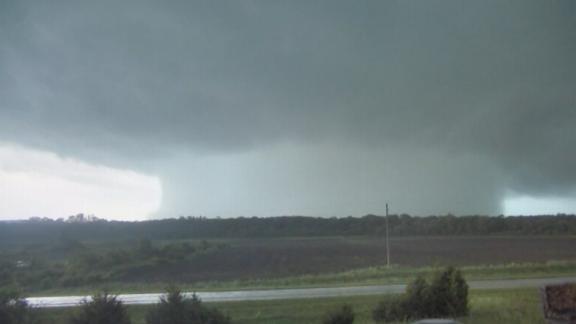 As people cleaned up tornado debris in hard-hit sections of several states, millions are bracing for more bad weather across the Midwest.

Tulsa and its surrounding area, which was bracing for possible flooding, welcomed good news Wednesday that the Army Corps of Engineers would begin reducing the amount of water intentionally released at the Keystone Dam ahead of schedule.

The Corps said Monday it had planned to release 275,000 cubic feet of water per second from the Keystone Dam -- which is the equivalent of three Olympic-sized pools -- through Thursday.

The Army Corps started progressively lowering the release rate on Wednesday and will continue to do so until Thursday morning. By then, 235,000 cubic feet of water per second will be released, Lt. Col. Adam Weece, a spokesman for Corps' southwestern division, told CNN.

The Corps hopes to quickly decrease the impact to communities and the levees and dam, Weece said.

"Keystone Lake now has enough capacity space to safely hold the surplus while retaining the ability to handle more inflow if rain comes," he said.

Keystone Lake was about 33 feet above normal Wednesday afternoon, according to figures from the Army Corps.

Tulsa Mayor G.T. Bynum said the area caught a break when the Keystone Basin didn't get amount of rain as forecast on Tuesday.

Up to 2 inches of rain fell in the Tulsa area on Tuesday as predicted. But the rainfall wasn't heavy just to the north and northwest of Tulsa, according to forecasters.

"We were very fortunate last night for the first time in about a week-and-a-half, the weather broke our way," Bynum told reporters. "

"Our emergency response team is not letting up despite this good news," Bynum said in a Facebook post about the Army Corps' decision.

"We have a long, long way to go before the Arkansas River and Keystone are back to normal," the post said.

The swelling Arkansas River had posed a threat to Tulsa's levees.

Without the dam, it would have been 'far worse'

The news from the Army Corps came amid concern and praise from residents in Sand Springs, just west of Tulsa, over the intentional release of water from the dam.

The release of water from the Keystone Dam contributed to flooding in a less populated area, just outside of Sand Springs.

Rick Sawn, 68, who has lived in Sand Springs for the last eight years, said his home was still dry Wednesday morning though water had been creeping up to it.

"I believe they did their job. It has been unprecedented the amount of rain we've had from here to Kansas that flows into Keystone Lake. "Without the dam system, it would have been far, far worse."

Debbie Chavez, who has lived in Sand Springs for 24 years, criticized the Corps.

"The water was in the driveway of our neighbors house last Wednesday. That's when evacuation was started for us," Chavez told CNN.

"The Corps knew more than a week before they flooded our area that the lake was high and substantial rains were coming in. While they can't predict an exact amount, it was known there would be heavy rains," Chavez said. "Weather reports give 10-day forecasts and they were completely ignored. They could have started releasing sooner, at a non-flooding rate, in anticipation of the rains."

Col. Chris Hussin, commander of the Corps' Tulsa district, said their mission is to reduce the impact of flooding. "However, our actions are governed by both regulation and the need to maintain the careful balance of water released and water stored," he said in a statement.

"We move aggressively to handle growing flood conditions while balancing water levels above and below dams, but we can only take these actions based on water on the ground," the statement said.