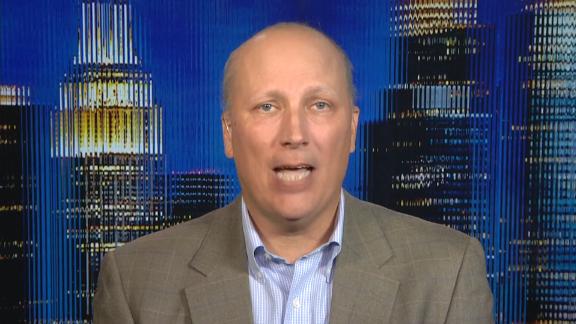 Rep. Chip Roy (R-TX) defends his decision to object to passage of a more than $19 billion disaster relief bill, further delaying the approval of funds that cleared the Senate last week with overwhelming bipartisan support.

The attacker in that mass stabbing in Japan has been identified as the country sets about mourning the two victims. Here's what else you need to know to Get Up to Speed and Out the Door. (You can also get "5 Things You Need to Know Today" delivered to your inbox daily. Sign up here.)

The Supreme Court doesn't seem to be ready to make big changes to Roe v. Wade or anything having to do with abortion law -- yet. The court yesterday decided a provision of Indiana law that says the state may prohibit abortions motivated solely by race, sex or disability should remain blocked. However, the court did allow another part of the law requiring clinics to bury or cremate fetal remains to take effect. The first part of the decision is a win for abortion rights advocates. Still, states are cracking down on abortion access: Missouri by Friday may be the first state to no longer offer abortions since Roe was decided in 1973. The state's health department is expected to block services at the last health center providing abortions, starting June 1.

We're still feeling the effects of President Trump's Memorial Day weekend rants about Democratic presidential candidate Joe Biden. In a series of tweets and statements, Trump called the former vice president "Swampman," "Sleepy Joe" and "a low-IQ individual" and made basically every kind of criticism you can make. Here's the thing: Some campaign experts think these kinds of attacks could actually be good for Biden's candidacy because they keep him in the public eye and give the sense that Trump views Biden as a real threat.

The hiker who was rescued after 17 days lost in Maui is talking about what the ordeal was like. Amanda Eller, 35, was found safe Friday after she'd been missing for more than two weeks. In a news conference yesterday, she said she survived on berries and river water and slept in boar dens. Eller thanked her rescuers and everyone who kept the search for her alive. "They could have just forgotten about me and said, another missing person, no big deal," she said. The civilian search team that found Eller and executed her dramatic rescue via helicopter are now involved in a search for another hiker, who reportedly went missing May 20 a few miles from where Eller was found.

Tornadoes and severe storms were everywhere yesterday. More than 1 million people in the New York City area found themselves under a tornado warning last night, and flights at LaGuardia airport were briefly grounded. A severe storm appeared to damage a New Jersey high school, although luckily no one was hurt. In Missouri and Kansas, a series of tornadoes touched down, razing dozens of homes and knocking out power to thousands. The Midwest and Northeast have been putting up with these dangerous weather patterns for nearly two weeks now -- and 39 million people from northeastern Texas to the Northeast STILL face threats today of heavy rain, hail and flash floods.

New Jersey health officials are investigating an unusual outbreak involving Legionnaires' disease. There are 22 reported cases of the disease in Union County, with patients becoming ill between March 8 and May 13. Legionnaires' disease is a type of lung infection spread through the air and is usually associated with buildings or structures with complex water systems, like hotels or cruise ships. Interestingly enough, you can't get it from another person -- you have to breathe in water droplets that contain the bacteria.

Next time you do something really difficult at your job and people don't appreciate it, spare a thought for the person who did this wax figure.

We can barely avoid cracking our screens as it is, and soon we're going to fold them? Good luck.

Important detail: She beat out 19 other candidates!

Partygoers at a Floatopia event in Virginia Beach left 20,000 lbs of trash

"I have a disproportionate amount of money to share."

MacKenzie Bezos, Amazon founder Jeff Bezos' ex-wife, who has pledged half of her nearly $37 billion fortune to charity

The amount of disaster aid in a government spending bill that's stalled in the US House. The money is supposed to provide relief to farmers and victims of hurricanes and tornadoes, but the representatives blocking it want a full House vote and more border security money before signing off.

All I want to know is, how long did it take someone to set up all of these perfectly arranged dominoes? (Click here to view.)