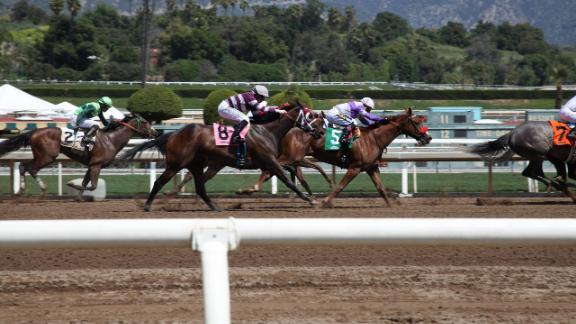 Animal rights activists are again calling for races to be suspended at Santa Anita Park amid a string of horse deaths that forced the park to temporarily shut down earlier this year.

The famed Arcadia, California, racecourse, which will play host to this year's Breeders' Cup World Championships in November, recorded its 26th death since December when Kochees was injured during a race Saturday. The 9-year-old gelding had to be put down Sunday.

Track spokesman Stefan Friedman told CNN the track is safe and there will be consequences in Kochees' death.

He would not go into detail but said the rules at Santa Anita require that every horse who races be seen by a trainer's veterinarian and by the track's vet. He said two trainers also got the boot last week, again declining to provide details.

"Everybody's got to be pointed at the fact that the horse comes first," he said. "If you do not put the safety of the horse first at this track, you will not be welcome here."

It was Kochees' sixth race at the track this year. He's also worked out there five times since January, according to Equibase, which maintains a database of horse racing statistics.

The horse's death comes days after a session of the California Horse Racing Board grew testy when activists faced off with fans, veterinarians and trainers, CNN affiliate KCAL reported.

When one animal advocate said keeping the park open was tantamount to premeditated murder, trainer Ron McAnally said he wanted to cry when he recently lost a horse.

Veterinarian Karen Calco, who has been connected to Santa Anita for 30 years, added, "That hurts. We are doing the best we can," according to KCAL.

Here is what we know about Santa Anita:

Why are the horses dying?

Many have pointed to Southern California's wettest winter in almost a decade, saying the rain has made the dirt track where most of the deaths occurred too soft.

Arcadia is an arid locale, especially in the summer, so treating the surface can be tricky. In preparation for storms, a sealant can be used to prevent the track surface from washing away, but when the rain stops, trainers complain the track is too hard.

While there's been a lot of focus on track conditions, some experts say that is only part of the equation and that the industry needs to take a closer look at its training practices and the drugs that can be administered to horses.

Is Santa Anita the most dangerous track?

Deaths happen, no matter where horse racing events are staged. From 2009 to 2018, there were 6,134 horse deaths in 3.4 million starts nationwide, according to a tally kept by The Jockey Club, an organization focusing on the integrity, health and safety of horse racing.

The rate over that decade rises for dirt tracks and for races shorter than six furlongs. A furlong is an eighth of a mile.

One of the nation's busiest tracks, Santa Anita's problems have centered on its 1-mile dirt track, though there have been deaths on its turf track and deaths not associated with racing or training.

"To those who say, 'Well, horse deaths are eventual,' we don't accept that and we are doing everything possible to bring that number as close to zero as possible," Friedman told CNN on Monday. "If we aren't out there shooting for zero, we aren't doing our job, and that's the No. 1 priority for us is horse safety."

Analysis of five years of data from California's three busiest parks show Santa Anita has been the deadliest, with 232 racing and training deaths of horses in 44,475 starts, the state horse racing board says. That's 5.2 deaths per 1,000 starts, and while that appears to be significantly higher than the national numbers, The Jockey's Club's data does not include training deaths.

Is the industry taking a closer look?

After a 4-year-old filly shattered her leg on a training run, marking the 21st death at Santa Anita since December, the park closed for evaluation March 5. Experts conducted numerous tests, including simulations and soil sample analyses, during the closure, the track said, and the Los Angeles County district attorney's office announced it was assigning investigators to look into the fatalities.

Santa Anita's reopening came with numerous changes: trainers must apply two days in advance before working out a horse; jockeys must replace whips with softer "cushion crops;" and restrictions on steroids, anti-inflammation drugs and race-day medications, including Lasix, were instituted.

Lasix is a "performance enhancer cloaked as therapeutic medication that less than 10% of the horses need," despite 95% of horses receiving it, The Jockey Club said in recent paper.

A coalition of tracks and industry associations has agreed to begin phasing out Lasix next year, with stakes races — including all Triple Crown venues and the Breeders' Cup — ending its use by 2021.

Santa Anita reopened in late March. Four horses have died since the reopening.

When does the season end?

Racing will continue until June 23.

Counting the Memorial Day races, which include three contests with $500,000 purses, that means 13 more race days at Santa Ana. Races are generally held on Fridays, Saturdays and Sundays.

After the season ends next month, the next race will be the Breeders' Cup World Championships on November 1 and 2. The event is considered one of the sport's biggest and richest with about $28 million in prizes doled out across 14 races last year.

Why are they being euthanized?

Horse's leg bones support an enormous amount of weight, typically more than a 1,100 pounds, so when they break the effect is catastrophic. Keeping a horse still so that its leg will heal properly is impossible, and it could open the horse to the risk of infection, inflammation and circulation issues. What's more, the chances of a complete recovery are unlikely.

Given the cost of treatment and risk to the animal, owners tend to euthanize injured horses.

Muscle and skeletal injuries account for 80% of deaths at California race tracks, and half of those deaths stem from injuries to bones in the horse's ankle area, according to the California Horse Racing Board.

While necropsies indicate there is "pre-existing pathology" associated with about 90% of the fatal injuries, doctors are working on ways to detect those conditions before it's too late, the board said.

Friedman, the track spokesman, said during his Monday interview that Santa Anita was about to bring in the first-ever PET scan in horse racing, which will be used to detect "micro-fractures" and other injuries.

Is there a national governing body for horse racing?

States are largely left to regulate the sport, and in California, lawmakers have proposed legislation authorizing the California Horse Racing Board to suspend racing if dangerous conditions exist.

The Jockey Club is among many groups pushing for a national governing body for horse racing. After a 23rd horse died at Santa Anita this year, the group called for international standards designed to protect horses, including: a central rule-making body; anti-doping program; transparency in treatments and procedures; regulation of drugs that enhance performance and mask injury; and rest requirements designed to promote the animal's healing.

House Resolution 1754 was also introduced in the US Congress last month. It aims to "improve the integrity and safety of horseracing by requiring a uniform anti-doping and medication control program to be developed and enforced by an independent Horseracing Anti-Doping and Medication Control Authority."

The board told CNN in a statement that it "regrets the loss of any horse. We are committed to working with the entire California horse racing industry in the protection of horses and riders."