Raheem Sterling on racist abuse: 'This is more than just about football' 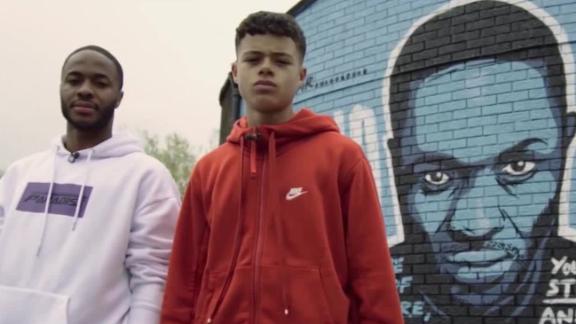 Bleacher Report talks to Raheem Sterling and City fan Ethan Ross about racial abuse and how to fight back from these issues.

It was the moment that prompted Manchester City and England star Raheem Sterling to become an unofficial spokesman for his generation of players on the issue of racism.

Racially abused by Chelsea fans during Manchester City's defeat at Stamford Bridge in December, Sterling says one of his abiding memories of that incident is the "pure frustration and anger on people's faces."

"The abuse I got there -- looking at the fans -- made me realize this is more than just about football," Sterling told the Bleacher Report.

"The best way that I can deal with it is not to get angry and let my football do the talking."

Nonetheless soon after the incident, Sterling posted on Instagram, referencing two articles from the MailOnline -- one covering a young white player, the other a young black player -- arguing they highlighted the role the media plays in perpetuating racial prejudices in society.

And after being targeted along with England teammates Danny Rose and Callum Hudson-Odoi during a 5-1 win against Montenegro, Sterling stated in a post-match interview: "It's 2019 now ... we can only bring awareness and light to the situation." Sterling had cupped his ears to the offending supporters after scoring England's fifth goal in order to highlight the situation.

READ: 'I didn't mean to be a leader:' How Raheem Sterling took on racists

In his interview with the Bleacher Report, Sterling called on the football authorities to do more to help players.

"What would be good is if the people in charge go to people who have been racially abused and ask us and try to make a better change."

In a statement sent to CNN Sport, England's Football Association said it welcomed "Raheem's thoughtful comments regarding the fight against racism and our work in this important area is ongoing."

The statement added: We know there is more to be done and are committed to this in partnership with others across the game.

"With the UEFA Nations League approaching in early June, we look forward to picking up more formally with Raheem once his England commitments are over for the season."

The Premeir League said "more needs to be done to promote inclusion and diversity across football and to ensure BAME fans and players are supported.'

In its statement the Premier League added: "Together, we are also committed to improving pathways to encourage more people from different backgrounds to take up coaching, refereeing and administrative roles in the sport.

''Raheem took part in our No Room for Racism campaign and we would welcome the opportunity to talk to him, and other players, about discrimination in football.

"Developing our work in this area is a priority for the Premier League.''

In a remarkable season both on and off the pitch, Sterling's influence has transcended his sport and he also inspiring the next generation to speak out and stand up to racist abuse.

After being contacted by Ethan Ross, a young boy who had faced racial abuse at school, Sterling wrote a letter back urging the teenager to "be proud" and "stand tall."

The City forward then went one step further, meeting Ross at the Eithad Stadium.