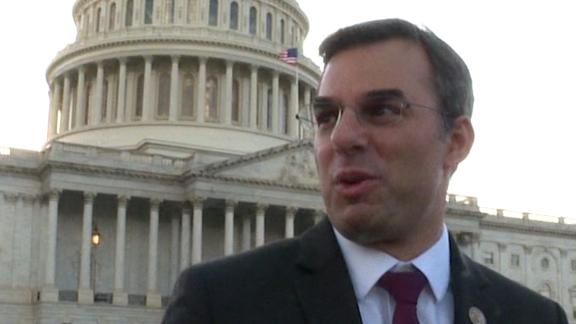 Rep. Justin Amash (R-MI), the first Republican congressman to accuse President Trump of "impeachable conduct," shared why he will not be deterred by the president or House Minority Leader Kevin McCarthy.

An astonishing thing happened on Saturday. US Rep. Justin Amash, R-Michigan, read the redacted Mueller Report and concluded from the evidence that President Donald Trump committed impeachable offenses, and broke ranks with his party. In a concise tweet, Amash -- a tea party Republican -- announced to the world: "President Trump has engaged in impeachable conduct."

The furious backlash from his fellow Republicans began immediately. Trump himself even took to Twitter to call Amash a "total lightweight."

Some may have been surprised to see Sen. Mitt Romney -- the Utah Republican who is a former presidential candidate and occasional Trump antagonist -- get into the act. On Jake Tapper's "State of the Union" Sunday, he said he too read the Mueller Report and "reached a different conclusion:" that the report does not establish that Trump obstructed justice.

What method of legal analysis could Romney possibly be using?

I ask this rhetorically, and tweeted about it last weekend (this essay is adapted from that thread), because the method of legal analysis used in the Mueller Report is known as IRAC, a method widely known to lawyers and law students. Mitt Romney, by the way, has a law degree from Harvard.

IRAC stands for Issue, Rule, Analysis, Conclusion. No surprise: the Mueller Report uses the IRAC method elegantly and beautifully; the analysis is done for us. All we have to do is read it. We can then decide for ourselves who is correct, Rep. Amash or Sen. Romney.

The "issue" part of IRAC would be phrased as a question: Did Trump commit obstruction of justice?

Next comes the "rule" which means listing the elements of the crime. The elements of obstruction of justice, says the Mueller Report, are:

2. A nexus between the obstructive act and an official proceeding; and

Next, we look to see if we have enough facts to support each element. This is the "analysis" part of IRAC.

To achieve a conviction, a prosecutor must have enough evidence to prove each element beyond a reasonable doubt. To keep this simple, let's focus on the facts given in Volume II, pages 113-120 of the Mueller Report.

The facts we find there are easily summarized:

• In January of 2018, the New York Times reported the story;

• Trump, through his personal lawyer and two aides, "sought to have McGahn deny" the story and create a false record;

• McGahn refused because the story was true and he wouldn't lie, and;

• Trump, in media interviews, denied that he had tried to fire Mueller;

The evidence Mueller examined includes multiple witnesses who testified under oath and contemporaneous notes and records. Mueller looked at all of the evidence and concluded that the weight of the evidence was against Trump. In straight talk that means Mueller concluded Trump was lying.

Look at that! Mueller has evidence to support the first element.

Element 2 is essentially a nexus. To establish the nexus, the prosecution must show that the actions of the suspect — in this case, Trump — would tend to hinder, delay, or prevent communication of information to investigators.

The evidence Mueller examined to determine Element 2 is easily summarized:

• Trump knew the special counsel was investigating obstruction-related events and that the investigation wasn't complete;

• McGahn changing his story would undercut his "credibility as a potential" witness;

• Trump specifically wanted McGahn to produce a written document, and:

• Trump wasn't simply engaging in a media strategy or he would have given an interview denying the story. Instead he specifically asked McGahn to write a letter "for our records" 10 days after the stories ran.

From this, Mueller concluded there were "enough facts" to support the second element as well.

Here is the evidence Mueller used to analyze Element 3:

• Trump "laid the groundwork for pressing McGahn to alter his account" by telling at least one other person that "it might be necessary to fire McGahn if he did not deny the story";

• Trump's statements to McGahn reflect his understanding -- and his displeasure -- that those events (during which he told McGahn "Mueller has to go") would be part of an obstruction-of-justice inquiry.

From this, Mueller asserted that "substantial evidence indicates that in repeatedly urging McGahn to dispute that he was ordered to have the Special Counsel terminated, the President acted for the purpose of influencing McGahn's account in order to deflect or prevent further scrutiny of the President's conduct towards the investigation."

There we have it: evidence to support each element. What Mueller didn't do was draw the conclusion: Trump obstructed justice. He explained why he didn't do that on pages 7-8, Vol. II.

But we didn't really need him to draw the conclusion. Once the analysis part is done, the conclusion is obvious. It's therefore no surprise that on May 6 more than 900 former federal prosecutors signed a letter saying they would have charged "any other person not covered by the Office of Legal Counsel policy against indicting a sitting President" with obstruction on this evidence.

People like Sen. Romney who come to a different conclusion should show the public their analysis, and explain which of the three elements haven't been met and why. It would also be helpful if they explained which particular parts of Mueller's analysis clear Trump and why.

Otherwise, we really have no choice but to conclude that they are telling a politically expedient lie.

This particular lie wouldn't be just any lie. It would be a lie that endangers the Constitution and the republic because elected senators like Mitt Romney are shielding a lawbreaking President.

The Mueller Report explains that obstruction doesn't have to succeed for it to be obstruction. This makes sense, right? If it succeeds, there won't be any charges. Kind of like: Treason never prospers, and what is the reason? If it prospers, none dare call it treason.

It seems Sen. Romney thought he could avoid a constitutional crisis by exonerating the President, as per this tweet:

In fact, Sen. Romney is helping create a constitutional crisis by undermining the document itself.

I have questions for Sen. Romney:

Why do you appear to be lying?

Are you afraid of angering Trump's base, knowing that without Trump's ardent supporters, it will be impossible to put together a national coalition should you run for President?

Are you afraid of Trump?

Or are you afraid of the truth?

Animal shelter in Oxford to close to surrenders

Two killed in wreck with garbage truck in Oxford

Booneville loses to St. Andrew's in 3A final

Belmont beats Kossuth in OT for 3A title

Bryce's Saturday morning forecast: Plenty of sunshine and temperatures in the low 60s for Saturday