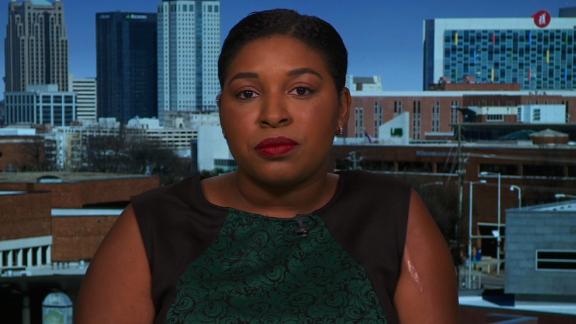 An Alabama woman says finding out she was pregnant with her rapist's child was the worst moment of her life. After Alabama passed a restrictive abortion bill, she's speaking out about her experience.

Alabama abortion rights activist Amanda Reyes says watching her state's lawmakers debate highly-restrictive abortion legislation was one of "the most horrifyingly frustrating" experiences of her life.

Reyes runs the Yellowhammer Fund, a non-profit group that helps Alabama women get care at the state's three abortion clinics -- or helps them get abortions out of state when needed.

The group helped 313 women get abortions in 2018, but Reyes says fundraising dropped off this year, so they were only able to serve 92 clients as of the end of last month.

That changed this week after Alabama passed a near-total ban on abortions that could punish doctors with up to 99-years in prison for performing abortions.

The law only allows exceptions "to avoid a serious health risk to the unborn child's mother," for ectopic pregnancy and if the "unborn child has a lethal anomaly." Gov. Kay Ivey signed the measure into law on Wednesday.

Reyes says donations to her group started pouring in on Tuesday after the bill passed the Senate.

"I looked down and checked my phone and saw this just onslaught of donations and tweets and things like that and was just really blown away," she told CNN

"It's a really significant amount of money that's going to have a really fantastic impact on abortion access in the South," Reyes said.

Democratic presidential candidates such as Kirsten Gillibrand, Eric Swalwell, Kamala Harris, Cory Booker and Bernie Sanders are asking citizens to donate to the group. Entertainers such as Piper Perabo and Kumail Nanjiani urged the public to contribute to Yellowhammer.

Planned Parenthood said it has seen an uptick in overall donations and the number of tribute donations made in people's honor has doubled over the last 24 hours. The group said it has gotten notable gifts honoring Alabama women. It also received gifts sarcastically honoring the state of Ohio and Georgia Gov. Brian Kemp.

Kemp signed a law last week that would ban abortions if the fetal heartbeat can be detected when it goes into effect on January 1. The American Civil Liberties Union filed suit on Wednesday to block Ohio's fetal heartbeat bill from going into affect.

Reyes doesn't know exactly how much money has come in, but she expects to be able to help twice as many women get abortions as the group did last year.

The group has focused most of its efforts on helping women in their second trimester get abortions because the need is more urgent.

"One of my big goals is to try to get us to the point where we can actually help people in their first trimester," she said.

Many of the women they work with are very poor and come to the group after trying to save money for their abortion.

The group also hopes to open resource centers that provide menstrual supplies, condoms, emergency contraception, diapers and baby formula for women who decide to have their children and other items.

"We want to fund all choices. That is really our ultimate goal," Reyes said. "I would love to fund someone having a baby as much as I love funding an abortion. I want people to do what they want with their bodies."