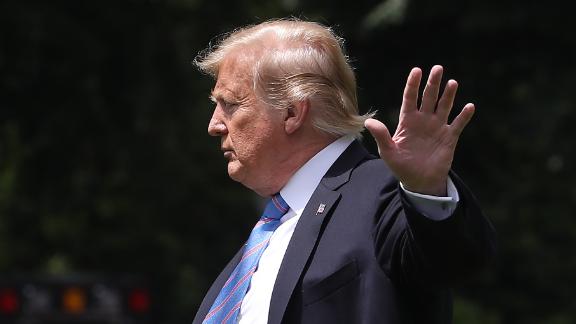 The White House is preparing to release a broad outline of proposed immigration reforms aimed at unifying congressional Republicans on the issue.

The photos, obtained by CNN, could have been taken at a refugee camp in the Third World. Children sleep in the dirt, some covered only by Mylar blankets. A woman and child sit on rocks, huddled against a building. People mill about outside makeshift tents.

The conditions look miserable. Yet they are not in some struggling far-away country. They are here in the United States, at the Border Patrol station in McAllen, Texas, where officials have strained to process the increasing numbers of migrants -- most arriving from Central America.

The images, taken last weekend, lay bare the failure of the Trump administration to provide for the people arriving at our border. Equally troubling is the fact that administration officials still have no sound plan to deal with this growing humanitarian crisis.

That should come as no surprise, because this administration's restrictionist, deterrence-focused immigration strategies are out of sync with existing law, American values and the reality on the ground.

The Trump administration's immigration proposals have consistently been driven by politics, and are sometimes even preposterous.

For example, a representative of one organization who met with Kushner and former Homeland Security Secretary Kirstjen Nielsen about a White House proposal on dealing with the surge, said Nielsen suggested "Zumba" exercise classes for detained migrants, to make them feel at home in detention.

Yes, you read that correctly.

Here is the reality: Right now, the number of illegal border crossings is on the rise, with apprehensions reaching an 11-year high. More than 76,000 migrants crossed the border without authorization in February, according to US Customs and Border Protection. In March, this number was more than 103,000.

These figures, while not as high as past decades, nonetheless pose a serious challenge to the government. Unlike years past, these migrants are coming mainly from Central America, not Mexico.

They include record numbers of families. Many of them plan to seek asylum. That means they are legally entitled to make their claim for humanitarian relief under US and international law -- a situation that has led to overcrowded, overwhelmed border patrol stations and makeshift detention facilities.

Unfortunately, the administration refuses to view this crisis based on the facts. Central American migrants are coming to the United StatesU because they are fleeing gangs, drug cartels, violence or poverty in their home countries.

But President Trump has cast these desperate people in a sharply negative light. To him they are the gang members, criminals, and traffickers. Last month, he even mocked asylum seekers, calling them "some of the roughest people you've ever seen," and suggesting that they looked like UFC fighters. He called America's asylum program a "scam."

With this lack of compassion coming from the commander in chief -- and perhaps even a lack of understanding of America's laws -- it is no surprise that he and his administration have yet to deal with the border crisis in an effective and humane way.

Their latest plan is to have the Transportation Security Administration (TSA) send hundreds of officials to the border to help control the influx. While these efforts would not involve uniformed airport screeners, some parts of the TSA would be asked to contribute about 10% of its workforce. These TSA officials would join the 4,300 active duty and National Guard troops already assisting at the border.

And guess what? Despite their best efforts, it won't be enough. The only real way to stanch the flow of migrants is to help tackle the problems at the source -- Central America. What the United States needs, and some Democrats have proposed, is a kind of Marshall Plan for countries like Guatemala, El Salvador and Honduras.

In contrast, Trump wants to cut nearly $1 billion in congressionally approved aid to Central American nations, an idea that, if implemented, will likely lead to more illegal immigration. The US Agency for International Development, which oversees aid disbursement, uses these funds for programs that address the reasons people flee — including poverty and flaws in governance and justice systems.

A new bill about to be introduced by Congressional Democrats would, among other things, allow asylum-seekers to apply for humanitarian relief in their home countries, without making the dangerous trek northward.

Besides, pulling TSA workers away from their regular duties seems like a big problem for the country's already overstretched Homeland Security system, potentially putting Americans at risk just as the busy summer travel season is getting underway. Consider, too, that right now, there is no secretary of Homeland Security, only an acting head of the agency. That could prove problematic if the United States were to face another terrorist incident.

Yes, the situation at our southern border is untenable, and is getting worse. But the Trump administration has shown little interest in pragmatic reforms. Instead, the administration has been considering immigration policies ranging from draconian to ridiculous. (The Zumba approach, by the way, is not entirely new: an article last August in the San Antonio Express-News described it as one of the offerings at a privately-run detention center for women and children in Dilley, Texas.)

This week, the Washington Post reported that Homeland Security officials weighed a plan for mass roundups of undocumented families across the country. Meanwhile, how many more migrant children will have to die in government custody before Congress steps in to overhaul our immigration system?

The images of women and children sleeping on concrete at the border are a stain on the American tradition of welcoming immigrants and refugees. Trump's immigration policies have been a failure, and these vulnerable people are paying the cruel price.

Hi: 72° Lo: 55°
Feels Like: 57°
More Weather
High pressure has moved into our area and drier air has moved back into our area. Temperatures for daytime highs will get warmer and warmer over the next several days.