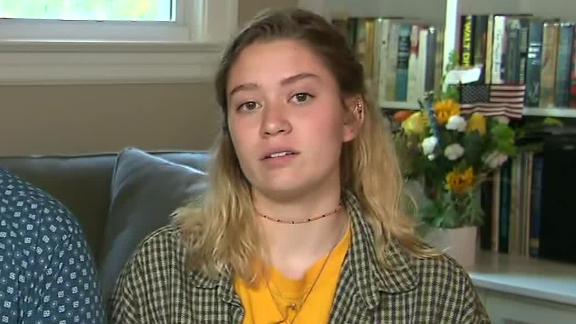 Lauren Westmoreland, the girlfriend of Riley Howell, the student who tackled a gunman at the University of North Carolina at Charlotte, says she knew that Riley would've risked his life to ensure others were safe.

They lost their lives under painfully similar circumstances.

When a classmate opened fire Tuesday at STEM School Highlands Ranch in suburban Denver, 18-year-old Kendrick Castillo charged him, getting shot but giving others time to take cover or run. Eight others were wounded.

A week earlier, another gunman opened fire in a University of North Carolina at Charlotte classroom, sending people diving for cover or rushing toward a door. Riley Howell, a 21-year-old student, tackled the shooter. Howell was one of two people killed, but he managed to knock the gunman off his feet and bring the shooting to an end.

"It's ... heroic but we still needed him here," Lauren Westmoreland, Riley's girlfriend of more than five years, told CNN's Alisyn Camerota on Friday.

"There never should have been a scenario in which they had to lay down their lives, especially not ones so young who still had their whole life to live."

In the age of "run, hide, fight" -- what experts describe as the new mantra for surviving an active shooter situation by taking out the gunman -- the heroism of these students came at too high a price.

"I'm sitting here thinking that maybe what Riley did is what people are going to have to start doing," Westmoreland said. "I don't like to think about the fact that someone else had to do the same thing."

She added, "I don't ever want to have anyone else deal with what I did when I walked out of my last exam. It was supposed to be a happy moment, and I had to look at all these texts, phone calls, asking me if Riley was OK, if I had heard from him. There was a shooting at Charlotte. Have you heard from him? And I'm sure it was the same thing for Kendrick Castillo's parents that day."

The newly founded Riley Howell Foundation will assist organizations that support victims of gun violence, according to Westmoreland and her brother, Matthew.

"So now. only a week later, there is another family that needs help and not every family gets the media attention, and eventually that does die down when all the cameras go away and the news has left town (and) they are just left with silence in their house, and we want to be there for them when that happens," he said.

The Westmorelands said they were not surprised to learn that Howell charged the gunman, knocking him off his feet and averting more bloodshed. That allowed a police officer to rush in, disarm the suspect and take him into custody.

"It was something that I was trying not to think about until I knew for sure," Lauren Westmoreland said.

Said Matthew Westmoreland, "I was trying not to think about that. I didn't want that to be the case. I knew if he was in the same room, I knew what he would do."

Beta brings some very heavy rainfall to some folks

VIDEO:It's harvest time in the sweet potato capital of the world

Matt's Tuesday Evening Forecast - Look at all that rain from Beta