Video shows police firing 76 shots at suspect. The officers won't be charged in his death 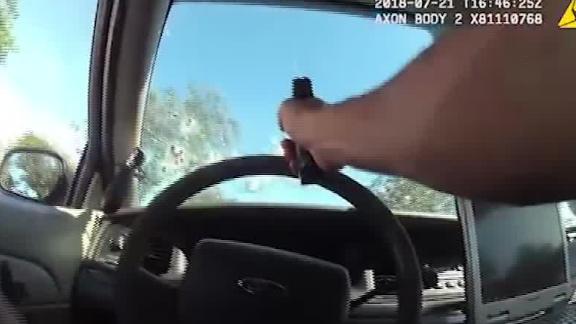 The two police officers who were involved in a fatal shooting last summer in Anaheim, California, will not face any criminal charges, the police chief said Wednesday.

Sean Staymates and Kevin Pedersen fired more than 70 times at 50-year-old Eliuth Penaloza Nava, who they'd been told was armed and acting erratically, according to authorities.

"It is our legal opinion that there is a lack of sufficient evidence to show beyond a reasonable doubt criminal culpability on the part of Officers Staymates and Pedersen when they fatally shot Nava on July 21, 2018," the Orange County District Attorney's Office said in a letter to Anaheim Police Chief Jorge Cisneros, providing details of the investigation.

"Both Officer Pedersen and Officer Staymates were justified in believing that Nava posed a significant threat of death or serious physical injury to both officers and to others," the letter said. Even though they weren't charged, the DA's letter called their conduct "alarming and irresponsible."

Neither Pedersen nor Staymates could be reached on Wednesday.

On the morning of his death, one of Nava's brothers called the police to say Nava was under influence of an unknown drug and "hallucinating," according to the letter, which contains a detailed report of the incident.

The brother also told police Nava was armed with a gun and a knife in a truck parked in front of his parents' house, prosecutors said.

Dash cam and body cam footage released by the Orange County District Attorney's office showed Pedersen and Staymates responding to a call in a residential neighborhood in Anaheim.

When the officers arrived on scene, Staymates saw Nava sit up and start the truck. The officers exited their vehicle, drew their weapons, and told Nava to stop the truck multiple times, according to the report.

Nava did not comply with the officers and drove off. The report says that Pedersen saw Nava reach down toward the floorboard immediately into the pursuit. He saw Nava holding what appeared to be a black semi-automatic handgun pointed at the roof of the truck. Nava then pointed the gun out the window and directly aimed it at the officers, the report said.

The gun was actually a CO2-powered air pistol, according to the report.

"It was black in color and extremely similar in appearance to an authentic 9mm Luger pistol. There was no orange tip on the gun, and no other markings to readily distinguish this air pistol from a real firearm," said the report.

The report also said that a few seconds later, Pedersen fired approximately seven rounds through the front windshield of the patrol unit at Nava's truck.

"Officers Pedersen and Staymates both feared Nava was going to shoot and kill them," according to the report.

In the video, both officers are seen shooting through the windshield of their vehicle.

"We highly discourage shooting through a windshield but our policy does not state that you cannot, there could be incidents or actions at times where that would be permissible," Cisneros said during Wednesday's news conference.

Pedersen, who was driving, fired his handgun 64 times, according to the report. Staymates, who was on the passenger side, fired 12 shots from a rifle, the report said.

Nava sustained at least nine gunshot wounds, according to autopsy results. Amphetamines and methamphetamines were found in his blood.

Pedersen, who was a probationary officer, has been dismissed by the Anaheim Police Department. Staymates will face department discipline, Cisneros said.

Interview: Pet of the Week - Emerie