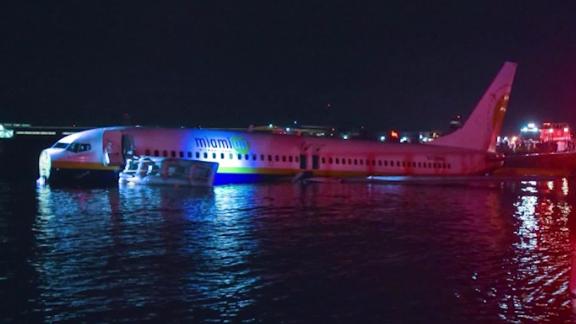 A Boeing 737 plane arriving from the Guantanamo Bay military station in Cuba with 143 people aboard went off the runway and into the St. Johns River in Florida, authorities said.

A military-chartered passenger plane slid off a runway and into a Florida river while landing Friday night, authorities said, forcing scores of passengers onto the aircraft's wings to await rescue.

The Boeing 737, carrying 136 passengers and seven crew members from the Guantanamo Bay military station in Cuba to Naval Air Station Jacksonville, came to rest in a shallow part of the St. Johns River and was not submerged.

The flight had passed through thunderstorms, a passenger told CNN.

The safe landing was a miracle, said Capt. Michael Connor, a commanding officer at the Jacksonville station.

"We could be talking about a different story this evening. So, there's a lot to say about the professionalism of the folks that helped the passengers off the airplane," he said early Saturday at a news conference.

The plane was taking active-duty military members, civilian government employees and their dependents back to the US, Connor said.

The plane will stay in the water until a National Transportation Safety Board team can examine the scene. NTSB investigators arrived late Saturday morning, the board said.

'Plenty of runway for an aircraft of this type,' base officer says

The plane, operated by charter airline Miami Air International, was landing at about 9:40 p.m. when it slid beyond the end of the runway and into the river, Naval Air Station Jacksonville said. Jacksonville Mayor Lenny Curry had initially called it a commercial flight.

It wasn't immediately clear why the plane didn't stop on the runway.

"It is a 9,000-foot runway, with 8,000 feet, I believe, of landing distance, and under normal conditions, (that) is plenty of runway for an aircraft of this type to be able to safely land," Connor told CNN on Saturday.

'We couldn't tell where we were,' passenger says

The plane flew through lightning and thunderstorms on its way to Jacksonville, passenger Cheryl Bormann told CNN's Don Lemon

"As we went down, we had a really hard landing," Bormann, a defense attorney, said. "And then the plane bounced and screeched and bounced some more. And it listed to the right, and it listed to the left. And then it sort of swerved, and then it came to a complete, like, ... a crash stop."

Some oxygen masks deployed, and overhead bins opened up and sent belongings spilling out. Bormann's identification, cash, credit cards, computers, phone and passport went flying to the seats behind her, and she could not retrieve them, she said.

Passengers at first had no idea where they were, Bormann said.

"We were in water. We couldn't tell where we were, whether it was a river or an ocean," she said. "There was rain coming down. There was lightning and thunder.

"And we stood on that wing for a significant period of time. Rescue folks came, and eventually someone inflated a life raft that had been on the plane, and we began climbing into it. Everybody was helping everybody."

Firefighters used a cable to pull people on an inflated raft to a nearby pier. At least 50 firefighters were involved in the rescue, said Chief Mark Russo of First Coast Navy Fire and Emergency Services.

The pets "have not been retrieved yet due to safety issues with the aircraft," the naval air station said early Saturday.

"Our hearts and prayers go out to those pet owners during this terrible incident," the station said on Facebook.

A wet runway could lead to hydroplaning

"Flying around or through areas of convection can be dangerous as it can create heavy turbulence in the air and a wet runway, leading to the threat of hydroplaning upon landing," he said.

The White House called to offer help as the situation was developing, the mayor said.

"It sounds to me like it was likely a unit, it was either deploying or re-deploying out of Guantanamo Bay," he told CNN's Don Lemon. "Most Americans think that when military forces move around the globe, they're always in an Air Force jet. That, in fact, is not the case. Most of the time we use civilian charter airplanes."