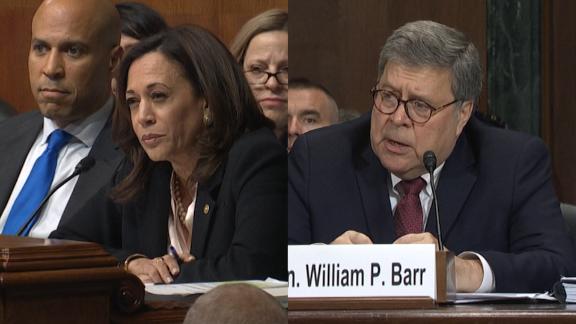 Attorney General William Barr's Senate testimony on Wednesday was a master class in obfuscation, backtracking and blame-shifting. This performance would've been pathetic coming from an ordinary witness -- never mind from the chief law enforcement officer of the United States.

Throughout the day, Barr's explanations for his most consequential decisions ranged from flatly unpersuasive to downright bizarre. When asked about his determination that not one of the "potentially obstructive actions" detailed by special counsel Robert Mueller constituted obstruction of justice, Barr offered the weak rejoinder that there was no proven underlying crime.

Indeed, Barr offered next to nothing to justify his dramatic conclusion that Trump never obstructed justice. When pressed on one of the most flagrant examples of obstruction -- Trump's instruction to then-White House Counsel Don McGahn to have Deputy Attorney General Rod Rosenstein fire Mueller -- Barr resorted to a perplexing claim that Trump merely wanted McGahn to discuss Mueller's conflict of interests. Yet Mueller himself finds in the report that Trump, through McGahn, made "efforts to remove" Mueller, and told McGahn that Mueller "must be removed." Again: this is the top prosecutor in the United States, not a sneaky defense lawyer out of "Better Call Saul."

Barr spent much of the day on the run from Mueller's remarkable March 27 letter, which flatly rebuked Barr for publicly characterizing his report in a way that "did not fully capture the context, nature and substance of this Office's work and conclusions." Barr meekly claimed that Mueller's objection was with the media, which had misshaped public opinion -- but that's simply not what Mueller's letter says. Yes, Mueller takes issue with media coverage. However, he was also concerned with Barr's four-page summary -- to such an extent that Mueller felt it necessary to put it all on paper the day after the attorney general released it.

And then there was the tragicomedy: Barr openly fawning over Trump and yet playing dumb when asked the most elementary questions by Democrats. Barr lamented that Trump was falsely accused -- as if Trump was the one-armed man in "The Fugitive" -- and excused Trump's obstruction efforts because, Barr surmised, he must have felt aggrieved by the investigation. When asked how a political campaign should react if approached by a foreign national offering dirt, Barr didn't give the only correct and sensible answer -- "run and call the FBI" -- but instead twisted himself in a pretzel, saying the person should first try to ascertain if the foreigner is an intel agent. And Barr pretended not to understand what basic words such as "receptive" and "suggest" mean, when Democrats had the nerve to use such "technical" terms.

Barr's performance today answered few questions and raised plenty of new ones. He offered nothing of substance to even begin to explain his dramatic "no obstruction" conclusion. He showed little appreciation for the national security threat posed by Russian interference in the 2016 election -- and the fact that the Mueller report concluded that the Trump campaign "expected it would benefit electorally" from Russian hacking -- nor much inclination to prevent similar attacks in 2020. And he offered no coherent rejoinder to Mueller's concern regarding Barr's apparent efforts to spin the Mueller report before releasing it to the public.

Barr now has bailed out on his scheduled House testimony tomorrow, which is a genuine embarrassment: the attorney general of the United States is running away from a few minutes of follow-up questioning by congressional aides. But this is far from over. In the coming weeks, we will likely hear from Mueller himself, not to mention crucial witnesses, including McGahn (at least in the Democratic-controlled House).

If it comes down to a credibility contest between Barr and Mueller, it is already a mismatch in Mueller's favor. But now, after Wednesday's ridiculous performance by Barr, it'll be game over.

Tupelo officer out of hospital after being dragged by car

Youi can get tested for coronavirus at local clinics

Matt's 4pm Monday Forecast - Yes, it's hot, but it's about to get even hotter