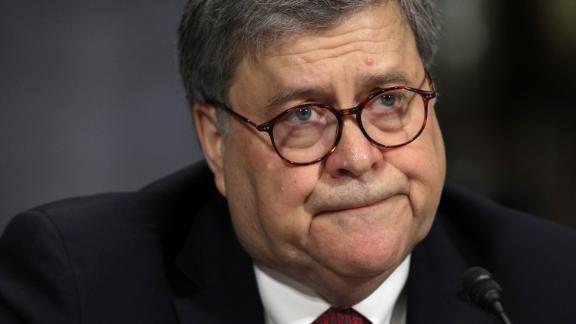 US Attorney General William Barr testifies to the Senate Judiciary Committee about his handling of the Mueller report.

Asked about his claim that he didn't know what special counsel Robert Mueller -- supposedly a long-time friend -- thought of his handling of the Mueller report's key findings, Attorney General William Barr would not admit any wrongdoing and correct the record. Instead, he followed the President Donald Trump playbook, offering spin and evasion like a man desperate to avoid accountability.

The issue is easy to grasp. On April 9, after Mueller wrote to voice his unease over the four-page summary that Barr issued, Barr was asked if he knew how the special counsel's team felt about his conclusions. "No, I don't," said Barr. When asked about this lie during a Senate Judiciary Committee hearing on Wednesday, he responded: "I talked directly to Bob Mueller, not members of his team," said Barr, suggesting he and Mueller were not in disagreement.

This reply ignored that, in Mueller's letter, he had expressed concern that Barr's handling of the report had contributed to "public confusion" and threatened to "undermine" the purpose of his work. Barr's evasiveness prompted Sen. Sheldon Whitehouse to admire his "masterful hairsplitting."

Things didn't get better from there. Barr explained that when he used the inflammatory word "spying" to describe federal probes of the Trump campaign, he wasn't suggesting anything untoward. "I don't think the word 'spying' has any pejorative connotation at all," he said.

The important thing to notice is not just the specific distortions of fact here, but also that a 68-year-old man with a lifelong record as a respected attorney and public official would make this performance the capstone of his career. Seemingly, Barr didn't become attorney general in order to commit reputational suicide. However, this fate was all but guaranteed when he aligned himself with a President who knows how to exploit the darker side of human nature.

Everyone has a dark side. It's the part of us that feels jealousy and hatred, that fantasizes about revenge. Maturity allows us to see that this shadow exists; morality prevents us from indulging it. The President, who has misled the public more than 10,000 times, according to the Washington Post, is neither mature nor moral. He gives his dark side free rein and looks for others to recruit into his schemes. Those who join in, like the soon-to-be-imprisoned former attorney Michael Cohen or current federal inmate Paul Manafort, do so at enormous risk.

Barr revealed his shadow self in 2018 when, as a private citizen, he sent the Justice Department a 19-page memo attacking Mueller's obstruction inquiry. A commonsense reading of this unsolicited document leads to the obvious conclusion that Barr was angling for the job of attorney general -- by promising, indirectly, that he would be the President's defender.

This is not a conventional view of the attorney general's role, but it surely appealed to a President who has repeatedly said he needed an attorney general in the mold of the shadowy Roy Cohn, who was disbarred on charges of "dishonesty, fraud, deceit and misrepresentation," to protect him. (Cohn never served as attorney general, but he was Trump's lawyer and mentor -- and shaped the President's views on the role that lawyers should play.)

And it turns out, Trump made the right choice. After Barr issued his four-page summary -- stating that Mueller had not found sufficient evidence of any Trump campaign official conspiring with the Russians and that Barr had decided Trump had not obstructed justice -- Trump claimed "complete and total exoneration."

This storyline dominated public discourse until the actual report was published and revealed a far more nuanced understanding of both charges. Still, on the day the report was published, Barr held a press conference, where he peddled the same misleading arguments about Trump's innocence in all matters -- despite the blatant discrepancies between his summary and the full version of the report.

Barr now joins a host of people who have been forced by the President to make character-revealing choices. Press Secretary Sarah Sanders, according to the Mueller report, chose to lie regarding the circumstances surrounding the firing of former FBI Director James Comey. (She claims it was a slip of the tongue.) And what little was left of her credibility has now largely been lost.

Then there is Kellyanne Conway, counselor to the President, who has made such outrageous claims about the existence of "alternative facts," that she, too, has lost much of her credibility.

Sanders and Conway are so far down the path of deceit in the service of Trump that one can't imagine them turning around, copping to what they have done and choosing another straighter path.

But Barr had the option to take a different route. Other men at the end of their careers, like former Secretary of Defense James Mattis and former Chief of Staff John Kelly saw what was at stake and, with their resignations, walked away. Barr didn't heed their example -- and instead followed the President.

Hi: 71° Lo: 45°
Feels Like: 68°
More Weather
A cold front passing through our area overnight will bring into our area some of the coolest temperatures of the season so far. We will see most of the highs this weekend only in the upper 60s to lower 70s. While overnight lows will drop off down into the 40s Saturday night.

Tupelo family grateful for new home from Habitat for Humanity

Chase in Monroe County landed man back behind bars