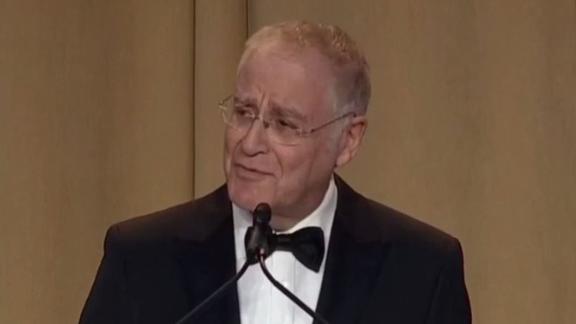 Ron Chernow, the author of the Alexander Hamilton biography that inspired the hit musical "Hamilton," was invited to speak at the White House Correspondents Dinner in place of a comedian. The historian was well received as he alternated between clever jokes and a call to arms for democracy.

But Trump ended up skipping the annual event for the third year in a row and instead attended a rally in Wisconsin. And, to be honest, Trump made the right choice.

I say that because presidential historian Ron Chernow, who gave a speech in lieu of a comedian, not only served up some stinging comedic jabs at the President, but he was also funnier than Trump could ever be. And both would've been too much for Trump to handle.

As a reminder, after last year's WHCD, where comedian Michelle Wolf tore into Trump and his press secretary Sarah Sanders, Trump took to Twitter to whine that Wolf was "filthy" and "bombed." But in that tweet, Trump revealed something much more about how deeply it hurts him to be laughed at. The President tweeted that Wolf "couldn't even deliver her lines-much like the Seth Meyers weak performance."

If you are asking why Trump is bringing up NBC's Seth Meyers, it's because when Trump attended the WHCD in 2011, Meyers comically fileted him with jokes like, "Donald Trump said recently that he has a great relationship with 'the blacks.' Although unless 'the blacks' are a family of white people, I bet he is mistaken." These many years later, Trump still feels the sting of that comedic takedown.

Chernow, the author of the Alexander Hamilton biography that inspired the massive hit musical "Hamilton," opened his remarks by joking about Trump's "edict" last Tuesday banning everyone in his administration from attending the dinner. Chernow playfully commented, "I was puzzled by this news, but then I learned a rumor was circulating in Washington that I was going to be reading from the redacted sections of the Mueller report and everything was explained."

Later Chernow, while referencing Trump's recent comment that America "is full" when speaking about immigration, joked that Hamilton was an immigrant who arrived, "thank God, before the country was full." He added, "Frankly I don't know why they let the guy in, clearly someone slipped up at the southern border."

The historian also took aim at Trump's recently reported comments that if George Washington were "smart," he would've put his name on Mount Vernon, with Trump noting, "You've got to put your name on stuff or no one remembers you." Chernow remarked, "As best I can tell, Washington committed only one major blunder as President: He failed to put his name on Mount Vernon and thereby bungled an early opportunity at branding." He wryly added, "Clearly deficient at the art of the deal, the poor man had to settle at the lowly title of 'Father of his Country.'"

What a contrast to Trump's attempts at humor at his rally. Trump, like an old-time comedian too lazy to write new material, doled out his "classics" -- calling Sen. Elizabeth Warren "Pocahontas" and slamming Sens. Bernie Sanders as "Crazy Bernie." He even said, "Can you imagine any of these people up here doing what I'm doing. ... There'd be 200 people show up, if they were president. If they weren't president, nobody would show up, is that right?"

Another painful attempt at humor was when Trump said his press secretary is "becoming too popular, I'm jealous," as he then mimicked his catch phrase from his years on "The Apprentice" -- declaring, "Sarah, you're fired!"

And in between his attempts at humor, Trump served up his worn-out lines, going after Hillary Clinton for alleged criminal conduct and slamming the late Sen. John McCain for not repealing the Affordable Care Act -- "one man decided to vote against it."

I can only imagine how a rambling Trump at the WHCD would have been received. And making it worse would've been the contrast to Chernow's speech, which was not only funny but also cleverly called out Trump's attacks on the First Amendment, noting, "When you chip away at the press, you chip away at our democracy."

Chernow finished his speech by paraphrasing a line by Mark Twain: "Politicians and diapers must be changed often -- and for the same reason." And in the case of Trump, that tired, unfunny diaper is starting to sag.

Variable cloudiness will be the rule on our Wednesday