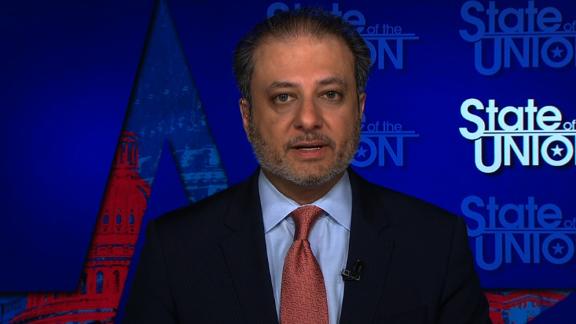 In an interview with Jake Tapper, Preet Bharara discusses Rudy Giuliani's earlier interview and his comments that there is "nothing wrong" with a campaign taking information from the Russians.

There was a time Rudy Giuliani was viewed as a crime-fighting US attorney and later as the valiant mayor of New York in the aftermath of the 9/11 terror attacks. But that Rudy is long gone. And all that remains is a man who will be best known for his work as a pathetic shill for Donald Trump.

We saw another example of this on Sunday when Giuliani, appearing on CNN's "State of the Union" in his capacity as Trump's personal lawyer, gave a master class in deceit as he discussed Robert Mueller's report.

First, Giuliani tried to make Americans think there's nothing wrong with a campaign for president of the United States accepting help from Russians. This came up in the discussion of the infamous June 2016 Trump Tower meeting attended by Donald Trump Jr., then Trump campaign manager Paul Manafort and Jared Kushner in the hopes of obtaining "dirt" on Hillary Clinton from Russian nationals.

In fact, the email to Trump Jr. that prompted that meeting promised not just helpful info from foreign nationals but from the Russian government itself, as it offered the Trump campaign, "some official documents and information that would incriminate Hillary and her dealings with Russia and would be very useful to your father" that was all "part of Russia and its government's support for Mr. Trump."

Giuliani defended the Trump campaign accepting help from Russians by stating, "Any candidate in the whole world in America would take information," causing Tapper to ask, "From a foreign source? From a hostile foreign source?" Giuliani shot back, "Who said it's even illegal?"

A few moments later when pressed again by Tapper on a presidential candidate getting help from Russians in the 2016 campaign, Giuliani responded adamantly, "No, no, there's nothing wrong with taking information from Russians! It depends on where it came from."

Giuliani then suggested the "dirt" the Russians offered to the Trump campaign would not be considered a "campaign contribution" as defined by federal law. In support, he argued that the Mueller report "says we can't conclude that [it's a contribution] because the law is pretty much against that."

Giuliani is incredibly wrong. First, it's election law 101 that a federal campaign cannot accept "a contribution or donation of money or other thing of value" from a foreign national.

In fact, the Mueller report explains the rationale for this law, noting that "the United States has a compelling interest in limiting the participation of foreign citizens in activities of democratic self-government, and in thereby preventing foreign influence over the U.S. political process."

And despite what Giuliani wants you to believe, Mueller did not conclude that the information offered by the Russians at the Trump Tower meeting wasn't a "campaign contribution." Rather, the report informed us that Trump Jr., Kushner and Manafort were in fact provided "dirt" from the Russian nationals at the meeting in the way of info about the "Ziff brothers" (Americans with business in Russia) who "donated their profits to the DNC or the Clinton campaign" and had allegedly been involved in money laundering.

Mueller wrote in reaction, "There are reasonable arguments that the offered information would constitute a thing of value within the meaning" of the federal law, meaning it could be considered a campaign contribution. However, Mueller did not charge Trump Jr. and the others in large part because there was insufficient evidence that they acted "willfully" to violate federal laws.

But apart from the legality, Giuliani's claim that there's "nothing wrong with taking information from Russians" is stunning, especially given that it was described in writing to Trump Jr. as "part of Russia and its government's support for Mr. Trump." The response of the Trump campaign to such an offer should have been a resounding "no" followed by a call to the FBI. Instead, Trump Jr. responded by email less than 20 minutes later, "If it's what you say I love it."

GOP Sen. Mitt Romney may have put it best in his statement Friday in response to the Trump campaign's apparent welcoming of help from Russia -- both directly at the Trump Tower meeting and by the Trump campaign's documented use of the WikiLeaks emails that US intelligence agencies determined in October 2016 had been supplied to WikiLeaks by Russian government hackers.

Romney wrote, that he was "appalled" that "fellow citizens working in a campaign for president welcomed help from Russia — including information that had been illegally obtained." He then added perhaps the most important comment, "none of them acted to inform American law enforcement."

But to Giuliani none of this wrong. And Trump apparently agrees since he has defended the Trump Tower meeting as the type of thing "done all the time in politics" and he cited WikiLeaks over 100 times in the closing weeks of the campaign.

While no one in the Trump campaign was charged with crimes for these actions, clearly the American people will have to decide if they agree with Giuliani that "there's nothing wrong" with Trump or any presidential campaign accepting assistance from Russians or other foreign nationals. The hope is that Americans will overwhelmingly agree that the election for President of our nation should be free from foreign interference and instead be decided solely by Americans.

Hi: 88° Lo: 63°
Feels Like: 85°
More Weather
The humidity ramps up a bit more into Friday morning, and so will the heat. Temperatures will heat up a little more with heat index values climbing even more. There could be an isolated afternoon shower in spots, though most will stay dry. Rain chances increase some into the weekend as a tropical system approaches. But it now appears that many areas may dodge the heaviest rain.