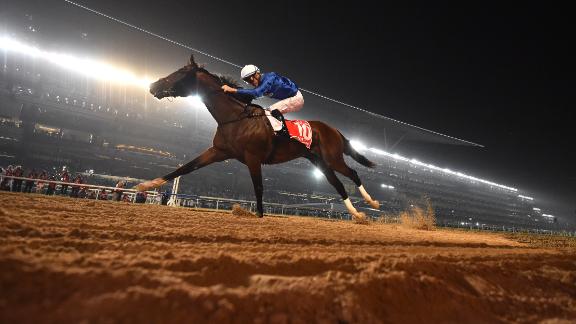 The Dubai World Cup is the richest race meeting on the planet and a highlight of Dubai's sporting and social calendar.

Boasting the most expensive prize purse in horse racing, it's no wonder the Dubai World Cup attracts the very best of the equine world.

Held at the Meydan Racecourse, the prestigious meeting marks the end of the UAE racing season, bringing together the world's top jockeys, trainers and thoroughbreds.

On Saturday, a cool $35 million will be up for grabs across the six Group 1 and three Group 2 races, culminating in the showpiece Dubai World Cup -- a suitable finale for such a glamorous setting.

Dubai has hosted the lucrative racing day every year since it was launched by ruler Sheikh Mohammed bin Rashid Al Maktoum in 1996.

Initially held at the Nad Al Sheba Racecourse, the event moved to the magnificent Meydan Racecourse in 2010, allowing it to flourish into the huge social and sporting spectacle it is today.

Stretching for nearly a mile along the home straight, the impressive grandstand can hold 80,000 spectators and is a suitable venue for such a prestigious event -- with ticket prices rising to more than $1,200.

The facility boasts a nine-hole golf course as well as luxury five-star hotel, including roof top swimming pool, which positions residents at the heart of the action.

"This is a once-seen-never-forgotten behemoth, shown to best effect after dark, when the distinctive crescent-shaped roof that rests atop this iconic building stands illuminated beneath the desert night sky," wrote Nicholas Godfrey on AtTheRaces.com.

"It would be hard to envisage a more atmospheric venue."

However, it's not just world-class racing on offer during the spectacle. In recent years, some of the world's biggest pop stars have headlined a concert that starts after the final race.

"Meydan," after all, is Arabic for "A place where people congregate."

The pinnacle of the event is the Dubai World Cup -- one of the highlights of the Flat racing calendar.

This year, the prize fund has been boosted to $12 million and the winner will take home an eye-watering $7.2 million -- the biggest prize for a single race in the world, overtaking the Pegasus World Cup.

Godolphin, the racing stable of Sheikh Mohammed, has particularly enjoyed the event in the past.

It celebrated its record eighth victory in 2018 as Thunder Snow, trained by Saeed bin Suroor, set a new dirt-track record. The reigning champion is back again this year, aiming to become the first horse to win the race more than once.

However, he'll have to beat the cream of the crop, including Japanese raider Yoshida and American horses Gunnevera and Seeking the Soul, which was second to City of Light in the lucrative Pegasus World Cup.

READ: Equine economics: How to own a racehorse

READ: A day in the life of a top racing yard

American Jerry Bailey is the race's winning-most jockey with four victorious -- his first coming in the inaugural meeting in 1996 on Cigar.

He sits just one win ahead of Flat racing's poster boy Frankie Dettori, who holds the record for most wins at the meeting, with 19 victories in 113 races.

As well as eight races for thoroughbreds, the event also includes the Dubai Kahayla Classic which is dedicated to the local Purebred Arabian horses.