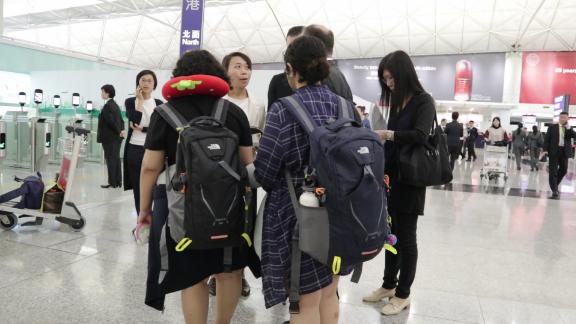 More than six months after they were stopped by Saudi officials at Hong Kong's International Airport, two sisters who were determined to leave a life of oppression in Saudi Arabia are free. CNN's Ivan Watson reports.

More than six months after they were stopped by Saudi officials at Hong Kong's International Airport, two sisters who were determined to leave a life of oppression in Saudi Arabia are free.

The sisters, who use the aliases Reem and Rawan, left Hong Kong late last week for a third country that offered them humanitarian visas.

At their request, CNN is not showing their faces nor revealing their real names or the country they've fled to, because the sisters, aged 20 and 18, fear they'll be pursued by their family or allies of the Saudi government.

The women arrived in Hong Kong last September expecting to stay for a two-hour stopover on their way to Melbourne, Australia. The women had fled a family holiday in Colombo, on a SriLankan Airlines flight to Hong Kong.

SriLankan Airlines told CNN that the sisters' father had told Saudi consular officials in Hong Kong that their mother was terminally ill and they needed to return to Riyadh immediately. Two airline staff were dispatched to meet them at the gate.

SriLankan Airlines told CNN its staff members canceled the sisters' onward flight to Melbourne at the "explicit request" of the Saudi consulate, which had already booked them on the flight to Riyadh. Saudi consular officials confronted the sisters at Hong Kong airport and lied in an attempt to get them to board the flight, the sisters said.

The women fled Hong Kong airport and spent six months hiding in the city, moving between hotels, hostels and homes, aided by activists and support groups, as their lawyer, Michael Vidler, attempted to find a safe way out.

The sisters may have left Hong Kong, but Vidler says serious questions remain about the actions of Saudi officials at Hong Kong airport, and subsequent attempts by Hong Kong police to find out who helped the women escape.

New information has been revealed in a video the sisters secretly recorded at a hotel on September 10, when six Hong Kong police officers arrived in response to a missing persons report, filed by their father and the Saudi consulate.

"They just say 'open the door' like hard, they pushing the door and say 'police, police, Hong Kong police. And they just... push my sister to the wall, and they just said 'who helped you' and it was really, like they investigate us," 18-year-old Rawan told CNN.

The sisters can be heard telling police what had happened to them at the airport a few days earlier. They tell officers they'd fled Saudi to escape their abusive parents and laws that give women "no rights." Saudi Arabia's male guardianship system requires women to get approval from their guardian to apply for a passport, travel, study and marry.

Police can be heard reassuring the sisters that they're safe but asking them who helped them to leave Saudi Arabia. "We take no stances in this issue," one officer can be heard saying. "So, be calm... we just want to guarantee your safety, okay. We would like to know the whole plan, the whole process... If anyone assist you."

Officers then drove them to Wan Chai police headquarters. During questioning, it emerges that the sisters' father and uncle are in another room in the same building. In a second video recording lasting 42 minutes, police can be heard repeatedly asking the sisters if they'll meet them. Despite being clearly told no, they press again, saying they won't do anything without the sisters' consent while adding that police had been put in a "difficult" position.

"The police, Hong Kong police know the situation is in between you and your father. Okay? Your father makes a report to us to find you. But now, you choose not see him right? So, the situation is very difficult now for us, for us, okay, because they really want to have a talk with you," one police officer can be heard saying.

At one point, the same officer can be heard asking fellow officers in Cantonese if the sisters were recording the conversation on their cellphones. A female officer says, "Should be no, we have checked." Then a third officer says, "Be vigilant...speak carefully."

The sisters say police later checked their phones and attempted to delete their recordings but missed this part.

Their lawyer believes Hong Kong police were acting at the behest of the Saudi consulate when they took the sisters in for questioning and pressured them to meet their family.

"We believe the police abused their powers to try to get the sisters to meet with their family and the Saudi consulate," Vidler said. "It is not the role of police to broker a meeting between those fleeing oppression and their oppressors. The sisters had made it clear from the beginning that they were fleeing their family and the Saudi authorities."

After six hours inside Wan Chai police headquarters, officers drove the sisters back to the hotel where they'd picked them up, and the women immediately fled to another hotel.

Documents show one week later, on September 17, Hong Kong police wrote to the second hotel, requesting access to closed-circuit television of the lobby and lifts. Separate letters were sent on the same day, asking for the booking records of six people, including the sisters.

The sisters' lawyer questions why police were still making inquiries about the sisters' movements one week after they'd established they were safe.

"The sisters had done nothing illegal, nor had the people who were assisting them," Vidler said. "The general public is entitled to know what the police were doing and whether they were doing it for Saudi authorities. We have asked the police and they have not provided us with an explanation."

CNN has requested comment from Hong Kong police but they declined to comment on individual cases. Police told CNN in February that the crime unit was investigating the incident at the airport.

The Saudi consulate in Hong Kong and Saudi Foreign Ministry haven't replied to CNN's repeated requests for comment about attempts to stop the sisters from traveling.

Two letters sent by CNN to the Saudi consulate in Hong Kong in February were returned unopened. Another request sent by email Saturday has gone unanswered.

The sisters knew their escape from Saudi Arabia would not be easy. But they never thought they would be trapped in a city, far from their chosen destination, with no money or way out.

Saudi Arabia canceled their passports, and the Hong Kong government only gave them temporary permission to stay while they sought visas elsewhere.

Many other women who have attempted to escape Saudi Arabia have been sent back. They include Dina Ali Lasloom, a 24-year-old Saudi woman who was forced onto a plane to Riyadh at Ninoy Aquino International Airport in Manila in April 2017. Her hands, feet and mouth had been bound with duct tape, one witness told Human Rights Watch.

The sisters were able to survive in Hong Kong for six months due to the generosity of strangers who had heard their initial desperate pleas for help on Twitter. Justice Centre Hong Kong, a non-profit group that aids forced migrants in the city, helped them to find accommodation and access legal support.

Cellphone video recently filmed at the office of the sisters' lawyer in Hong Kong shows the moment they were told they'd be leaving Hong Kong. They look stunned, and ask "what?" before reality sinks in. Reem covers her face with her hands and Rawan claps and cheers.

"The first thing I will do, I will dance in the airport, and like I will just express all my feelings there," Rawan told CNN. Her more reserved, older sister, Reem said, "I want to have a walk, just me by my own, because I can't do that in Hong Kong. I have to go with other people because it wasn't safe for us."

They sisters feared if their family found them, they'd be severely punished, jailed or killed. They've spent the last six months looking over their shoulders, not knowing who to trust.

The sisters told CNN they'd renounced Islam, a crime punishable by death in Saudi Arabia, and feared that if their family found them they'd be severely punished, jailed or killed.

The women left Hong Kong wearing the same battered trainers they wore when they arrived. But they were carrying new backpacks, with luggage tags they had bought when they finally allowed themselves to believe that safety could be one more flight away.

"It's really hard to wake every morning knowing nothing about your future. For us, we escaped from a place that we have no choice. We never had control," said Rawan. "We keep waiting, waiting... really, for me it was harder than what happened in the airport."

They're now in a new city, in temporary accommodation, coming to terms with cultural challenges, but excited about what lies ahead.

"When I look into the future, it makes me happy and relieved because finally I have rights," Reem said. "And I will go to a country where I matter, and if I need anything, I will find it there."