A Mueller legal showdown could be just around the corner 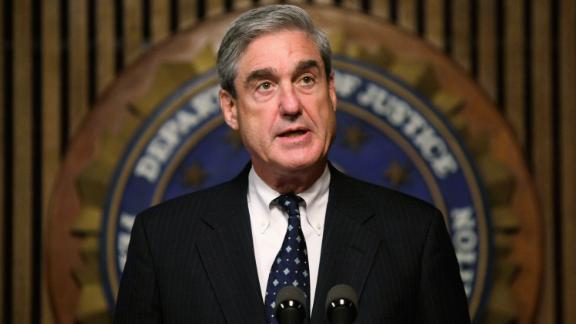 As special counsel Robert Mueller prepares to issue his final report, we soon could face a constitutional dilemma -- leading down the same road previously walked by President Richard Nixon. The facts are different in some respects now, but the stakes would be the same.

In 1974, a special prosecutor subpoenaed Nixon for tape recordings made inside the White House. The President resisted, asserting executive privilege -- the idea that confidential communications between the President and his advisers must remain secret and beyond the reach of a subpoena. And, in a unanimous 8-0 decision -- including three judges appointed by Nixon himself -- the Supreme Court recognized the concept of executive privilege but rejected its application to Nixon's case. Nixon was forced to turn over the tapes, and he resigned days later.

This week, we learned that White House lawyers expect to see Mueller's report before it becomes public, to enable them to object based on executive privilege. Similarly, President Donald Trump's personal counsel Rudy Giuliani stated that he has "reserved executive privilege and we have a right to assert it. The only way we can assert it is if we see what is in the report."

Trump -- surely aware of the recent 420-0 bipartisan vote in the House calling for full disclosure of the report -- later appeared to claim willingness to the House seeing the report, stating "I told the House if you want, let them see it." Trump's statement left unaddressed whether he meant the House should see the report in its entirety, or subject to his legal team's objections.

1. Will Attorney General William Barr show Trump the report in advance? The special counsel regulations require Mueller to file a "confidential report" with Barr, who in turn has broad discretion over whether and how to disseminate factual findings. It therefore sits squarely in Barr's hands whether to provide the report to Trump's lawyers before he sends it to Congress or the public.

2. If Trump asserts executive privilege, will Barr accept or reject it? If they do see the report in advance, Trump's legal team likely will assert executive privilege over communications between Trump and his close advisers, including conversations relevant to potential obstruction of justice with former White House counsel Don McGahn (who reportedly refused Trump's order to fire Mueller), former acting Attorney General Matthew Whitaker (reportedly the recipient of Trump's ire over the Southern District of New York's investigation of Michael Cohen) and others. It is possible that Barr decides on his own to accept Trump's assertion of executive privilege over portions of the report. But Barr could reject those assertions, setting the stage for a legal showdown.

3. If the dispute goes to the courts, who will prevail? A dispute over executive privilege in Mueller's report could go directly to the Supreme Court (see below for more on this). The Nixon court ruled that executive privilege is meant to protect "military, diplomatic or sensitive national security secrets" but not as a general shield against criminal exposure. Trump might argue that the Nixon case involved production of evidence (the tapes), whereas Trump would object to evidence of spoken conversations, but it is hard to see why that distinction would make a difference in the legal outcome.

Trump's best bet might be to rely on the changing composition of the Supreme Court itself. None of the justices from the Nixon case remains on the bench, and two of the nine current justices are Trump appointees -- one of whom, Brett Kavanaugh, has written that the President enjoys broad powers and protections from criminal processes such as subpoena and indictment.

If the case goes to the Supreme Court, we will see a legal showdown with the highest of stakes. The content of the Mueller report, and the future of Trump's presidency, could hang in the balance.

Meanwhile, this week, we got our first glimpse of the documents prosecutors submitted to a federal judge who authorized the Southern District of New York's April 2018 search warrants on Cohen's home, office and hotel. I see three big takeaways here.

First, the Cohen investigation started with Mueller in July 2017 -- nearly a year before the SDNY took over the case and searched Cohen's properties. Even before the SDNY's April 2018 search, prosecutors had ample evidence of crimes committed by Cohen and others.

Second, the SDNY appears to be working toward additional campaign finance charges. The newly unsealed documents include 20 pages of redactions to protect ongoing investigations, and Judge William Pauley noted that the documents "catalog an assortment of uncharged individuals and detail their involvement in ... the campaign finance charges to which Cohen pled guilty."

Third, the documents put to rest the suggestions by Trump and Giuliani that the FBI acted improperly or unfairly when a group of "stormtroopers" (per Giuliani) "broke into" (per Trump) Cohen's properties. In fact, as the newly released documents make clear, prosecutors went through all proper legal channels and amply demonstrated to a federal judge that they had probable cause to believe Cohen had committed crimes. Throw out the conspiracy theories; these documents prove this case was handled by the book from the start.

Bill, California: At the August 2016 "Cigar Club" meeting, Rick Gates, a former Trump campaign aide, was present when Paul Manafort gave polling data to suspected Kremlin-linked Konstantin Kilimnik. Is this why Gates has yet to be sentenced?

Gates also appears to be cooperating with Mueller on the August 2 Grand Havana Club meeting, during which Manafort gave confidential internal campaign polling data to Kilimnik, who has been linked with Russian intelligence. Gates was present for the meeting, and presumably has told Mueller all about it.

Whether the meeting itself is a crime, or fits into a larger criminal narrative, is one of the biggest remaining questions for Mueller. We know this much: Mueller's team represented in court that the meeting goes "very much to the heart of what the special counsel's office is investigating." Seems like a hint.

Kai-Lee, Canada: Who would be responsible for changing the Justice Department memo that states a sitting president cannot be indicted federally?

The DOJ policy against indicting a sitting president is just that: a policy. There is nothing in the Constitution, statute or case law on the issue. Just as DOJ makes its own internal policy, so, too, can DOJ change its policy -- at the discretion of the attorney general.

When I worked at the DOJ from 2004 to 2012, several policies changed. For example, in 2010 Attorney General Eric Holder issued a new policy giving federal prosecutors more discretion to exercise leniency in charging, plea and sentencing decisions. This replaced a stricter policy issued by Attorney General John Ashcroft.

While policy change is merely an attorney general's pen stroke away in theory, do not expect the policy against indicting the sitting president to be changed anytime soon. The policy has been in place since 1973 and was updated in 2000, so withdrawal would reverse decades of practice spanning multiple administrations. Further, any attorney general faces a political conundrum: By changing the policy, the attorney general places the very person who nominated him or her directly in the firing line.

Such a move would require two things: (1) a belief that the current non-indictment policy is legally flawed, and (2) serious political guts.

Gary, Texas: I understand DOJ policy states that a sitting president may not be indicted, but is there anything preventing a state from doing so?

If a state-level prosecutor did charge a sitting president, the President almost certainly would argue that he cannot be indicted while in office, which would tee up the issue for the courts. Exhibit A for the President would be the DOJ policy memo, which acknowledges that there is no clear answer, but also lays out in detailed fashion -- relying on both case law and policy concerns -- the argument against indictment. The case likely would end up at the US Supreme Court, in which case we would finally get a definitive answer to this perplexing legal issue.

Andrew, Florida: Will any of the investigating bodies examining Trump's world have the prerogative of requesting expedited Supreme Court rulings on cases that bypass the lower courts?

Typically, cases reach the US Supreme Court three ways: (1) appeals from cases heard in the lower federal courts, (2) appeals from decisions of state-level supreme courts, and (3) "original jurisdiction" for disputes between two states. The Supreme Court also has a rule permitting it to take a case before judgment in a lower court "upon a showing that the case is of such imperative public importance as to justify deviation from normal appellate practice and to require immediate determination in this court." Given the stakes of the ongoing investigation of the President, I would expect that any important legal issue to reach the courts -- for example, indictment of a sitting president or executive privilege -- could qualify for this direct, expedited review by the Supreme Court.

Maria, Colorado: What is the legal definition of conspiracy? Is "collusion" a legal term? Are these two related and, if yes, how?

"Collusion" is not a legal term. It appears nowhere in the federal criminal code except in obscure antitrust laws irrelevant to the Russian investigation. Trump and Giuliani have normalized the term through sheer repetition, but "collusion" -- perhaps this is why they have put it out there -- has no specific legal meaning and is subject to broad interpretation.

Robert, Maryland: If Trump loses the 2020 election, can he pardon anyone before he leaves the White House?

Yes. Even if Trump loses the election on November 3, 2020, he will remain in office until inauguration day -- January 20, 2021. And Trump would have the authority to issue pardons up until the moment he leaves office.

Presidents commonly issue pardons during their final days in office, in large part because pardons are inherently unpopular politically. Presidents Barack Obama, George W. Bush and Bill Clinton all issued pardons within days or weeks of leaving office. Clinton's pardons were particularly controversial; on his final day in office, Clinton pardoned his own brother Roger Clinton and fugitive financier Marc Rich, who fled the United States rather than face federal tax charges. The Rich pardon gave rise to a criminal investigation of potential bribery by the SDNY but never resulted in charges.

Three questions to watch next week:

1) What new information will we learn about the Trump Tower Moscow project when former Trump associate and convicted felon Felix Sater testifies publicly in Congress on March 27?

2) Now that the White House has missed the deadline set by Rep. Jerrold Nadler to provide documents responsive to the House Judiciary Committee's investigation of Trump, will Nadler up the ante by serving subpoenas?

3) With Rod Rosenstein remaining on board at DOJ to serve as a "heat shield" for Mueller, what "heat" will Mueller generate in the coming weeks?

Students deal with stress and anxiety through fun activities