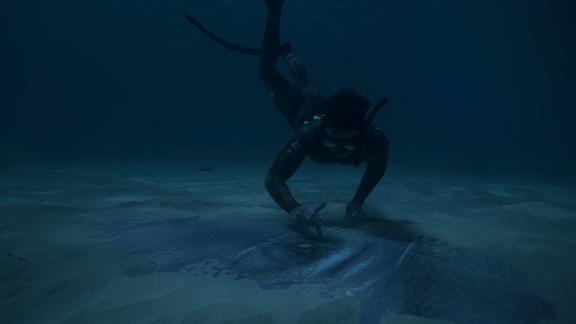 Hawaiian artist Sean Yoro likes to paint his evocative murals on precarious surfaces: melting icebergs, the burnt bark of trees and remote waterside walls at the mercy of rising tides, among others. The transient nature of the works, which are destined to naturally disappeared shortly after their creation, is used to bring attention to problems afflicting the environment.

But for his latest project he's set an extraordinary challenge for himself: to paint underwater while freediving, a form of diving that involves breath-holding and no scuba gear.

The project, titled "Deep Seads," is a series of three works created in locations around Hawaii, designed to raise awareness around dying coral reefs.

Marine heat caused by climate change is causing coral bleaching worldwide, and experts believe that the Great Barrier Reef off the northeast coast of Australia -- the only living organism that can be seen from space -- might be headed for a disastrous future. According to the WWF, coral reefs are home to 25% of all marine life.

Yoro used concrete and steel to create inert underwater structures known as artificial reefs, which are used to help jump start marine growth in areas affected by coral bleaching. He then turned them into a canvas for his murals, making sure that all materials used were not harmful to the environment, including the eco-friendly pigment sticks he used to paint.

"I had to create my own materials," he said in a phone interview. "The technique I ended up using reminded me of charcoal drawing back in when I was in art school."

The biggest hurdle, however, was the physical preparation required to efficiently paint underwater without an oxygen supply. "I've surfed my whole life, but as much as I have experience in the water I've never actually had any experience diving. So even just training for it was much more difficult than I imagined," he said.

Yoro had aimed to complete the project in fewer than six months, but due to an extensive training required, it ended up taking three times as long.

"For the first three months it was going okay, then I actually got hurt. I ruptured my ear drum and that took me out of the water for three more months," he said.

Even before he got hurt, Yoro believed he would be able to hold his breath underwater for about two minutes. "In fact, I was only able to hold it for probably 40 seconds and go down about 10, maybe 15 feet," he said.

After almost a year of training, his freediving technique allowed him to stay submerged for three minutes, which gave him about two minutes worth of painting time. But due to the time required for resurfacing and breathing, he would only get around 20 minutes of actual painting for every hour. That meant that each piece, on average, took three to four days of work with roughly 10 hours per day spent in the water.

Yoro painted three works for "Deep Seads." The first, titled "Lumens," depicts a jellyfish and is meant to capture the moment he discovered how much beauty and magic the ocean holds, as well as the fragile state in which it currently is.

The second, "Breath," an exhaling figure, is linked to the discovery of freediving, an activity that Yoro says requires as much control of the lungs as of the mind.

The third, "Buried," is the image of an eye, symbolizing the fragility of the life that lives in the oceans today. The figure is being covered by the sand, representing the need to protect what is left before it's too late.

Just like his previous works, these too will be long gone by the time you read this. Yoro believes that algae started covering the drawings about 12 to 14 days in, and hopefully many more living organism will be thriving on the artificial reefs by now.

Although Yoro often works in remote locations and under difficult conditions, he believes adapting his body to painting underwater has been the most demanding endeavor yet. "By far I would say this was the most physically and mentally challenging," he said.

The ocean floor, he added, felt almost otherworldly, which led him into a peculiar mental state. But most importantly, he knew that down there, every movement, every stroke had to count.

"The most crucial aspect was efficiency," he said. "I had to be very careful with the exact lines, to not waste any energy. Because with every line I drew, I realized that I was using up oxygen."