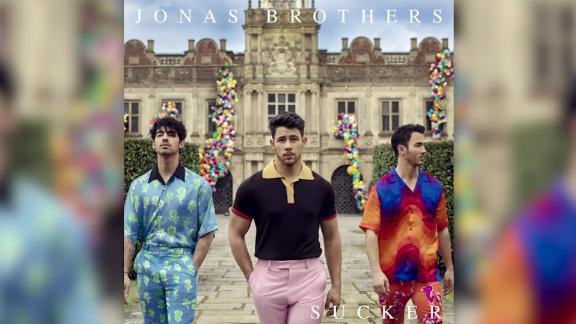 The Jonas Brothers are officially back together, and they made their comeback with an ode to the women in their lives.

S.O.S.! The Jonas Brothers are officially back together, and they made their comeback with an ode to the women in their lives.

On Thursday, the Jonas Brothers announced they're getting the band back together. Then at midnight the same night, they dropped a new single and music video called "Sucker," leaving fans burning up with excitement.

The video features colorful, lavish scenes of the three couples together on a huge estate as the brothers sing about being "suckers" for the women.

"You say the word and I'll go anywhere blindly," the song says. "I am a sucker for all the subliminal things no one knows about you."

The brothers said crooning about their love for their three leading ladies was a family affair.

"We really had the best time shooting this video in England with our family. Hope you guys love it. Feels good to be back," Joe Jonas tweeted.

This reunion comes after a little over five years of the trio separating professionally, and fans can't hold on any longer.

"Time to bring my Jonas brothers merch out of retirement," Emma Chamberlain tweeted.

Even with the brothers' much anticipated comeback, some fans (and brothers) thought it was the leading ladies who stole the show.

"My wife is soooooo beautiful in this video!!! How lucky am!?!!" Nick Jonas tweeted.

The Jonas Brothers skyrocketed to fame through the Disney Channel's "Camp Rock" movie series. They signed with Disney's Hollywood Records label in 2007, and their albums have sold millions of copies worldwide.