It's not just Cohen's words that implicate Trump 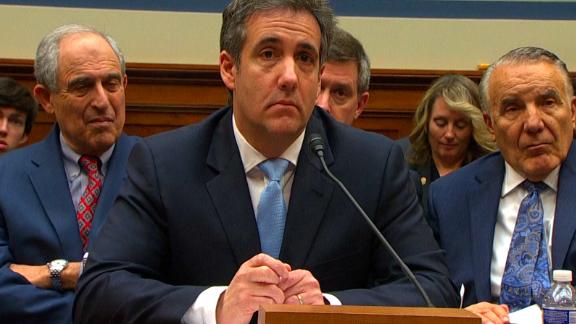 During his public testimony to Congress, President Donald Trump's former personal attorney Michael Cohen sent a harsh message to Trump and a warning to his supporters.

When Michael Cohen testified publicly in the House Oversight Committee on Wednesday, we did not see death threats or profane screaming matches. But the public did see the classic cooperator dynamic in play: One man swears to what the other vehemently denies, feelings of betrayal and mutual resentment boil to the surface and the stakes are at an all-time high.

After Cohen's testimony, many readers asked: As a former prosecutor, did you find his testimony credible? I did. Cohen, like all cooperating witnesses, is a flawed person and witness. But the question is not whether a cooperator is likeable; it is whether they can be believed. And prosecutors assess believability by examining corroboration -- external, independent evidence that supports (or undermines) the cooperator's testimony.

Corroboration is king. A prosecutor rarely asks a jury simply to accept the word of a cooperating witness as gospel. Rather, prosecutors test the cooperator's testimony against the independent evidence, and they know the jury will do the same.

Much (but not all) of Cohen's testimony is backed up by independent, external evidence. For example, Cohen produced a check for $35,000 signed by President Donald Trump in 2017 to reimburse Cohen for hush money payments to Stormy Daniels. Cynics can call Cohen a liar all day long, but there's no cross-examining a signed check.

While Cohen does not have a smoking gun for every element of his testimony, think of the corroborating evidence as a series of solid posts that lend structural support to the overall fencing of his testimony.

Cohen also draws support from a particularly persuasive and credible source: the United States Department of Justice. In key respects, Cohen's testimony comports with factual assertions the DOJ has made in prior court filings. For example, Cohen testified that in July 2016 Trump learned from Roger Stone that WikiLeaks would publish stolen emails and encouraged Stone -- "Wouldn't that be great" -- to proceed. In the Stone indictment, Mueller alleges that "senior Trump Campaign officials" contacted Stone about WikiLeaks and that one senior official "was directed" by an unnamed person to contact Stone about WikiLeaks' releases of emails. Cohen's testimony is entirely consistent with the allegations the DOJ makes in the Stone indictment.

If Wednesday's hearing had been a criminal trial, Cohen's testimony would have been the decisive moment in determining the President's fate on charges, including the same campaign finance violations to which Cohen himself has pleaded guilty. But ultimately -- given the current DOJ policy against indicting a sitting President -- Trump's fate will turn on politics. So the biggest remaining question is whether Cohen's testimony was both credible and persuasive enough to change the political calculus.

Robert, Arizona: Several pundits (yourself included) have indicated that Paul Manafort may face a long prison sentence. Given that potential reality, what are the chances that President Trump gives him a pardon?

Manafort is staring down the barrel of a devastating sentence -- two, in fact. First he faces a sentencing guidelines range of 235 to 293 months (just over 19 to 24 years) in the Eastern District of Virginia, where he was convicted by a federal jury on eight fraud counts. Manafort also faces up to a 10-year sentence in the District of Columbia, where he pleaded guilty to two additional felonies.

So Manafort is down to one final hope: a presidential pardon. And his sentencing memo is a thinly veiled love letter to Trump. Dutifully parroting Trump's talking points, Manafort's defense team notes repeatedly in the memo that he was convicted of mere "garden variety" "esoteric" offenses, but not "Russian collusion." I do not see Trump pardoning Manafort any time soon. Because Manafort can no longer cooperate (having squandered the opportunity by lying to Mueller), Manafort can no longer hurt Trump, so Trump gains nothing by a pardon. Additionally, Trump might incur a political cost by pardoning a convicted felon who has lied and cheated at every turn.

However, I do think a pardon is possible after Election Day 2020, whatever the outcome, when the political cost for Trump will likely be much lower.

Paul, California: How can Mueller's report be complete if he has not interviewed a key player in known campaign/Russian communications: Donald Trump Jr.?

Mueller has not interviewed or subpoenaed Trump Jr., which raises questions about his status. I see two possible scenarios here. First, Mueller might believe Trump Jr. is neither a target -- somebody who is likely to be indicted -- nor a witness. But given how central Trump Jr. was to the campaign and family business, it seems unlikely that he is not even a witness with information relevant to Mueller's investigation.

Second, Trump Jr. might be a target and, keeping with common prosecutorial practice, Mueller has not sought to interview him directly. Roger Stone is an example; Mueller never interviewed Stone before indicting him. Given Cohen's testimony that he briefed Trump Jr. on the Trump Tower Moscow project approximately 10 times, coupled with Trump Jr.'s prior testimony to Congress that he only had "peripheral" awareness of the project, Trump Jr. could face potential charges for perjury and false statements.

There also could be a middle ground where Mueller has not conclusively determined Trump Jr.'s criminal exposure and intends to refer any continuing investigation to some other component of DOJ.

Susan, Arizona: Is it possible that Mueller will hand off indictments or investigations to the SDNY if he doesn't complete them before he files his report?

As Mueller reportedly finishes his work and prepares to send a report to the attorney general, this moment is more transition than finale. Many loose ends remain -- the sentencing of Manafort, Michael Flynn and Rick Gates; the trial of Stone; and a "mystery" subpoena battle, to name a few -- which will not cease to exist the moment Mueller packs up shop. And those are just open matters that we know about. Remember the golden rule: Mueller always knows more than we do.

Mueller already has referred portions of his investigation to the Southern District of New York (Cohen and other investigations), the District of Washington, DC (which is helping staff the Stone case) and other DOJ components. The SDNY in particular has expanded on its referrals from Mueller, with growing investigations of the Trump Organization and inaugural committee. Then, of course, there's the Mueller report, by which Mueller -- through the attorney general -- may transmit his findings to Congress for further action, ranging from hearings to potential impeachment.

Do not count on Mueller to walk away until he has ensured that his work can be completed, even in his eventual absence.

Ron, California: Two DOJ rules seem to conspire to put a sitting president above the law: 1) The DOJ policy that a sitting president cannot be indicted. 2) And that the DOJ must be silent about any subject under investigation against whom the evidence does not rise to the level of indictment. Doesn't that derail a constitutional process for flushing out corruption from government?

House Democratic leaders sent a letter to Attorney General William Barr anticipating this precise Catch-22: "To maintain that a sitting president cannot be indicted, and then to withhold evidence of wrongdoing from Congress because the President will not be charged, is to convert [DOJ] policy into the means for a coverup."

While this result seems patently unjust, do not despair. First, there is ample precedent for public disclosure of derogatory facts relating to uncharged individuals. In several cases of extraordinary public interest -- the Hillary Clinton email investigation and the Ferguson Police Department investigation -- the DOJ made detailed public statements about subjects who were never charged with crimes. Mueller's investigation is of similar or greater public importance.

Second, House Democrats have made clear they will not accept a circular argument that places the President above the law. Their letter notes that because DOJ policy counsels against indicting a sitting president, "Congress could be the only institution currently situated to act on evidence of the President's misconduct." Look for House Democrats to use every tool at their disposal, including the subpoena power, to prevent this loophole from insulating the President from accountability.

Mary Belle, Missouri: How much is this Mueller investigation costing the American taxpayer?

According to the DOJ, the Mueller investigation cost approximately $25 million from its inception in May 2017 through September 2018. Assuming a roughly constant rate of spending, the investigation now has cost more than $30 million. While criminal investigations are not intended to be profit-making ventures, Mueller has more than recouped his own costs. The investigation has uncovered tax evasion totaling an estimated $48 million (which the government can recover through an arduous process of civil recovery), and Manafort alone has agreed to forfeit property worth more than $20 million.

Frank, Nebraska: If the declaration of a national emergency ends up before the Supreme Court, what will the court examine to determine the validity of the President's decision? For example, will it review the sources of information the President used to make that decision?

On the other hand, the court might decide that while it will defer generally to the President's determination, it still must evaluate the merits and ensure the President has not abused his authority. In that case, even if the court gives some deference to the President, then I believe the facts -- including the Department of Homeland Security's data showing that illegal immigration is at or near historic lows, and a statement from a bipartisan group of 58 former senior national security officials that there is "no factual basis" for a national emergency -- will establish that the declaration is unfounded and should be struck down.

3 questions for next week:

1) How much time will Manafort get when he faces his first sentencing in federal court in Virginia?

2) Will Mueller send his report to the attorney general?

3) Now that we know Cohen continues to cooperate with the SDNY on ongoing investigations, what matters might the SDNY be probing?

Our good weather trend will continue into our Thursday

Matt's Wednesday Evening Forecast - A bit cooler for the weekend