How convicted pedophile Cardinal George Pell was brought to justice 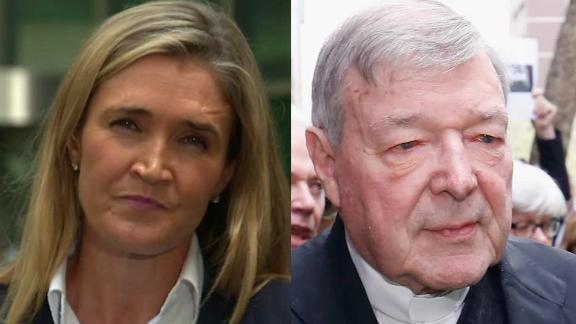 CNN's Anna Coren explains the significance of the conviction of Cardinal George Pell, the third-highest ranking member of the Catholic Church, who could face prison time for sexually abusing children.

Cardinal George Pell has joined the ranks of other shamed Catholic priests who betrayed the trust of children who believed they were men of God.

The Vatican treasurer, now a convicted pedophile, was a close adviser to the Pope, personally appointed by Francis as the Vatican's minister of Economy and, until October, was a member of the Pope's Council of nine advisers.

As a victim of sex abuse, his accuser can't be named under Australian law, but his testimony will be felt at the very heart of the Vatican, which for decades has been accused of ignoring, covering up and denying sex abuse was committed within its ranks.

In December, a jury found Pell abused two choirboys in the priest's sacristy of St. Patrick's Cathedral in Melbourne one Sunday in the 1990s, when Pell was the city's archbishop.

Only one victim is alive to tell his story, having kept his abuse secret for decades. The second boy died of a drug overdose, apparently having never divulged what had happened to him.

The existence of the trial couldn't be revealed until now due to an Australian suppression order. Pell's sentencing hearing is due to begin on Wednesday.

The conviction is the result of years of police work, including a special task force set up to solely investigate claims against the cardinal.

It also follows a damning report by a royal commission into institutional child abuse in Australia, which alleged more than 1,800 Catholic priests, brothers, lay people, and religious sisters across the country had assaulted thousands of children over the past 65 years.

The Vatican has yet to respond to the verdict. On Tuesday Mark Coleridge, Archbishop of Brisbane and President of the Australian Catholic Bishops' Conference, said in a statement in Rome the conviction had "shocked" many around the world.

"We respect the Australian legal system. The same legal system that delivered the verdict will now consider the appeal that the cardinal's legal team has lodged. Our hope at all times is that through this process justice will be served," he said.

Pell's conviction comes amid attempts by the Vatican to begin making amends for decades of abuse by priests across the world.

Over the past week, the Vatican held a historic summit on sexual abuse by clergy. Speaking at the last day on Sunday, Pope Francis described pedophile priests as "tools of Satan."

'The evil of pedophilia'

Pell's fall from grace may have been sealed with the pronouncement of the word "guilty," but for advocates of Australia's church abuse victims it was a long time coming.

In 2012, calls for a national inquiry finally produced results after a senior detective from the state of New South Wales broke ranks and wrote an open letter to the premier, in the Newcastle Herald.

"I have investigated so many sexual assaults in my 35 years of policing I've lost count. Having spent most of those years at the coal face I have seen the worst society can dredge up, particularly the evil of pedophilia within the Catholic Church," Detective Chief Inspector Peter Fox wrote at the time.

Four days later, then Prime Minister Julia Gillard announced a royal commission into institutional child abuse, declaring that "there have been too many revelations of adults who have averted their eyes from this evil."

At the time, Cardinal Pell suggested that the media had waged a "persistent press campaign" and "general smears" against the Catholic Church. He denied there was a coverup.

"(Although) there is a press campaign focused largely on us, it does not mean that we are largely the principal culprits," he told reporters in 2012.

He said he hoped the commission would show the public that the Catholic Church wasn't the worst offender.

Unfortunately for Pell, it did.

After five years of submissions, the final report, released in 2017, concluded that tens of thousands of children had been abused in Australia "over generations" in a range of institutions from children's homes to sporting clubs and schools.

"We will never know the true number," reads the report. "Whatever the number, it is a national tragedy, perpetrated over generations."

Out of all the testimonies heard by the royal commission, almost 60% said they were abused inside a religious institution. Of that number, more than 60% said of those were abused within the Catholic Church.

Such was the flood of allegations following the announcement that Victoria Police assigned a special taskforce to investigate the claims, even before the commission had released its final report.

The SANO Task Force started the job of chasing leads in 2013. Operation Tethering was formed at the same time to focus on claims specifically relating to Cardinal Pell. When the investigation began, there were no new public allegations against Pell.

In June 2015, however, a man walked into Victoria Police Center and told Acting Sergeant Christopher Reed he'd been abused as a choirboy in the late 1990s by none other than the then archbishop of Melbourne, George Pell.

He told how the then-newly inaugurated archbishop had just said mass when he caught the boy and his friend drinking wine in the priest's sacristy at the back of Melbourne's St. Patrick's Cathedral.

It was there the man said Pell exposed himself to the two young boys and forced the accuser to perform oral sex on him.

It wasn't the first time Pell had been accused of acting inappropriately with children, though it's the only time an accuser's claims have led to a trial and conviction.

In 2002, an inquiry chaired by former judge Alec Southwell examined allegations that Pell, then a student priest, had sexually abused a young boy at a camp on Philip Island in 1962. Pell denied the boy's claims.

The judge found Pell, then archbishop of Sydney, gave a trustworthy account, but so too did his accuser. In the end, he decided there wasn't enough evidence either way to take the matter further.

It isn't the only time Pell has avoided trial over lack of evidence. A second trial due to be held this April was called off by the crown prosecutor after the judge ruled a number of witnesses couldn't be called.

News of the December conviction had been kept under seal, and it can only now be revealed.

A suppression order was issued by the judge to avoid prejudicing the second trial.

During pre-trial hearings, the crown prosecutor described the accusations against Pell.

The accuser at the second trial, who can't be named under Australian law, had claimed Pell indecently assaulted him at the Eureka swimming pool in the regional city of Ballarat in the 1970s, when Pell was the local priest.

The accuser says Pell grabbed his genitals underwater as they played a game that involved the priest throwing boys in the pool. They'd climb onto his shoulders and jump off, or he'd catapult them into the air by clasping his hands underwater to give them a push up by their feet.

The crown prosecutor opted not to proceed with the trial after Chief Judge Peter Kidd ruled against the inclusion of testimony from other boys who claimed Pell's hands came uncomfortably close to their genitals.

Other charges were dropped during a committal hearing in 2018 ahead of the two trials. One witness died and another withdrew due to illness, weakening the prosecution's case.

The shock of Pell's conviction was even greater given that at the time of his crimes in the 1990s, he was launching a program to deal with accusations of sex abuse in the Church.

Then-archbishop Pell announced the compensation scheme, titled Melbourne Response, one month before a national scheme called Towards Healing was due to begin. As a result of Pell's initiative, there was no national response to the crisis.

Pell's program was limited to victims within the Archdiocese of Melbourne.

Since its launch, Melbourne Response has been criticized for providing only small amounts of compensation to victims, and in some circumstances, discouraging them from going to police with their complaints.

Pell referred to the scheme in his meeting with Australian police in Rome 20 years later, in 2016.

"I was the first person in the Western world to create a church structure to recognize, compensate and help to heal the wounds inflected by sexual abuse of children at the hands of some in the Catholic Church," he told officers in the interview played for the jury, according to transcripts of the interview seen by CNN.

Pell's characterization of himself as a defender of abuse victims is not shared by advocates who fought for years for justice. It was also not believed by those who saw him escort notorious child abuser Father Gerald Ridsdale to court in 1993.

Considered Australia's worst pedophile priest, Ridsdale was imprisoned in 1994 -- and continues to serve multiple sentences for sexually assaulting more than 50 victims including children.

Pell later said he escorted Ridsdale to court out of a sense of Christian duty but conceded to the royal commission that it had been a "mistake."

He also said he hadn't been aware of Ridsdale's decades of abuse -- a statement some victims found difficult to believe.

The benefit of the doubt

The second boy Pell was found guilty of abusing later died from a drug overdose.

The boy's mother told police she'd explicitly asked her son if he'd ever been "interfered with or touched up in choir," according to a transcript of Pell's trial. The boy, then a teenager, said no.

It's not known if the former choirboy had listened or read reports about what Pell had to say at the Royal Commission.

If he did, he would have heard Pell, now a close adviser to Pope Francis, tell a public hearing in Sydney that the attitude to child abuse in the Vatican in the 1990s was to give accused priests the "benefit of the doubt."

"The attitude of some people at the Vatican was that if accusations were being made against priests, they were made exclusively or at least predominantly by enemies of the Church to make trouble and therefore they should be dealt with skeptically," Pell told the commission.

"I think there was more of an inclination to give the benefit of the doubt to the defendant rather than listen seriously to the complaints."

There are signs the Vatican's attitude to church sex abusers is changing.

In mid-February, Francis defrocked US Cardinal Theodore McCarrick, the former archbishop of Washington, after he was found guilty by the church of abusing an altar boy in the 1970s.

"The Holy See's announcement regarding Theodore McCarrick is a clear signal that abuse will not be tolerated," Cardinal Daniel DiNardo, president of the US Conference of Catholic Bishops told CNN. "No bishop, no matter how influential, is above the law of the Church."

It's unclear if Pell will be defrocked. In December, within days of his conviction, the Vatican announced Pell was no longer a part of the Pope's council of advisers. Francis had written to three cardinals, including Pell, in October and thanked them for their work, a statement said.

The news that one of the church's highest-ranking cardinals is guilty of sex abuse came after bishops gathered at the Vatican for a four-day summit called by Pope Francis to address abuse within the church.

Francis urged the 190 Catholic leaders to "hear the cry of the small ones who are asking for justice."

Many of the victims of pedophile priests are no longer children. They're adults demanding justice and change in the church that so grossly betrayed them.

Pell's defense team announced Tuesday that it had appealed his conviction.

Residents react to electricity being restored

Pickens County, Alabama, without hospital during the Coronavirus pandemic