Zion Williamson injury: Should he stop playing in the NCAA? 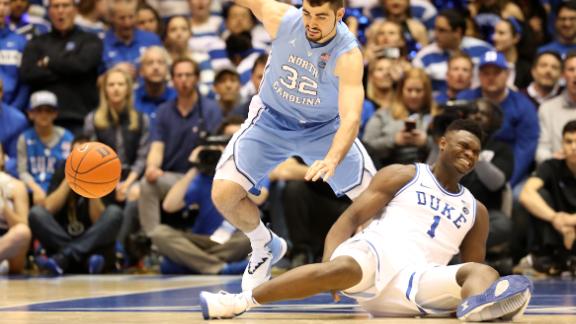 Duke basketball's star player Zion Williamson left a game against North Carolina with an injury after breaking through his Nike sneaker less than a minute into the rivalry game.

Zion Williamson is the biggest draw men's college basketball has seen in years. He is expected to be the top pick in June's NBA draft and is considered the best NBA prospect since LeBron James. At 18 years old, he's been a walking highlight reel for Duke.

The reason he's not playing in the league now, earning millions, is that he's not yet eligible. And while he waits, he can't earn a cent from his university or the NCAA.

Now, after suffering a knee injury when one of his shoes split wide open on the court, the question of whether he should be playing college basketball at all has been amplified.

From massive hype to a buzz kill

Per NBA rules, Williamson must wait one year after graduating from high school to be eligible for the NBA. So, he's spending a year playing for Duke. The hype has been legitimized not just with his dunks but by his all-around game.

Williamson was set to play Wednesday in arguably the biggest rivalry in college basketball: Duke was hosting the University of North Carolina, and celebrities, including former President Barack Obama, baseball Hall of Famer Ken Griffey Jr. and film director Spike Lee, were part of a crammed Cameron Indoor Stadium in Durham, North Carolina. Tickets for this game hovered around Super Bowl prices.

But the massive hype turned into a buzz kill.

A little more than 30 seconds into the game, Williamson slipped on the court, and his Nike shoe exploded, apparently from the brunt of his 6-foot-7, 285-pound frame. The shoe tore open, with Zion clutching his knee. He didn't return to the game, and Duke went on to lose at home, 88-72.

He has a Grade 1 (minor) right knee sprain, and the school says his status is day-to-day.

"We don't know how long he'll be out," Krzyzewski said Wednesday night.

His injury set the internet ablaze.

Williamson wears those Nikes not because the apparel company pays him to do so. That's prohibited for an NCAA student-athlete. No, instead, Duke has a contract with the shoe giant.

"We are obviously concerned and want to wish Zion a speedy recovery," the statement said. "The quality and performance of our products are of utmost importance. While this is an isolated occurrence, we are working to identify the issue."

Should Williamson sit out?

Williamson's trajectory brings to mind another athlete now playing another sport in college.

Clemson quarterback Trevor Lawrence in January won the College Football Playoff national championship. Immediately, the same talk centered around his NFL prospects, with many pundits saying they believed he could play in the NFL right then, at age 19. Lawrence, though, isn't eligible for the NFL draft until 2021.

While many elite collegiate athletes can attend school on an athletic scholarship, they're not paid a salary for their participation in sports. The money in professional sports is so great that there have been some college football players who have skipped bowl games to assure their health ahead of the NFL draft.

Could this start happening in college basketball, too?

Hall of Famers Scottie Pippen and Tracy McGrady agreed in January on ESPN's The Jump that Williamson should stop playing and wait for the NBA draft.

"I would stop playing because I feel that he could risk a major injury that could really hurt his career," Pippen said.