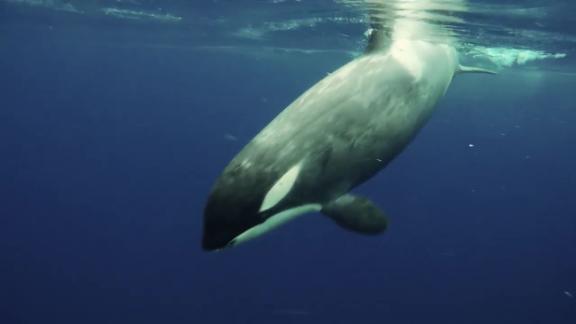 A scientist captured video of a close encounter she shared with a killer whale in Antarctica. CNN's John Vause has more.

An extraordinarily close encounter between a scientist and a killer whale has been captured on camera.

The creature then opens its mouth and chews on some toothfish before swimming away.

The video was shot during an expedition in the Ross Sea region Marine Protected Area earlier this month.

Eisert, who is based at the University of Canterbury in New Zealand, was standing by the edge of the sea ice, collecting samples, when she was approached by the whale.

The researcher has been studying Type-C killer whales in the region in order to better understand their population size, as well as where they live and what they eat.

And judging by the footage, toothfish are definitely a part of their diet.

Eisert was thrilled by the meeting and even suggested that the whale had been offering her some of his food.

"A young killer whale approached us on the sea ice in Antarctica to offer us a piece of toothfish. I love these guys."

Eisert's research is supported by Antarctica New Zealand and the Pew Charitable Trust through a Marine Conservation Fellowship.

Hi: 72° Lo: 51°
Feels Like: 64°
More Weather
High pressure will briefly dominate our weather forecast for Friday and Saturday. However, more low pressure moves into our area for the end of the weekend. This will bring back into our area some more chances for some rain and thunderstorms.

Store embezzlement arrest made in Oxford

Houston Carnegie Library opens to the public without appointments

Matt's Friday Evening Forecast - Not too shabby Saturday, then at times soggy Sunday

Dinger, Dinger: The story of girl, her father, and a home run she'll never forget

Calhoun City residents get their electricity back