ISIS bride to be stripped of British nationality will not be allowed into Bangladesh, government says 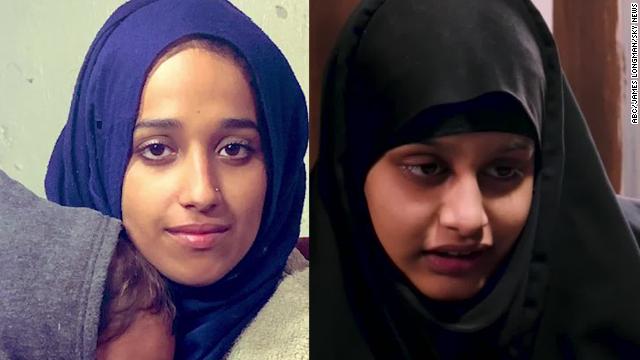 After traveling to the Middle East and becoming brides to ISIS fighters, two young women are speaking out about life inside the terrorist group. CNN's Brian Todd reports.

British teenager Shamima Begum, who moved from London to Syria four years ago to join ISIS, has said she was "a bit shocked" to learn that the UK plans to strip her of her British citizenship to prevent her from returning home.

Speaking from a refugee camp in Syria, the 19-year-old told CNN affiliate ITV that it was "kind of heartbreaking to read" a copy of the Home Office letter sent to her parents informing them of its decision.

Begum, who gave birth over the weekend and is seeking a return to Britain, called the move "hard to swallow" and described it as "a bit unjust on me and my son."

"My family made it sound like it would be a lot easier for me to come back to the UK," she said.

ITV News reported Tuesday that Begum's mother had received a letter from the Home Office which said an order to remove her citizenship had been made. The letter asked Begum's family to make her aware of the decision and of her right to appeal.

Debate over legality of UK move

The decision has sparked a debate about the legality behind it. A spokesman for the Home Office told CNN that the Home Secretary can deprive someone of their British citizenship "where it would not render the individual stateless."

Begum's family is of Bangladeshi origin, according to former chief superintendent for the Metropolitan Police, Dal Bab, who has been in contact with the family.

However the Bangladesh foreign ministry said in a statement that Begum is not a Bangladeshi citizen, nor has she ever visited the country.

"The Government of Bangladesh is deeply concerned that she has been erroneously identified as a holder of dual citizenship shared with Bangladesh alongside her birthplace, the United Kingdom," the statement said.

"She is a British citizen by birth and has never applied for dual nationality with Bangladesh ... There is no question of her being allowed to enter into Bangladesh."

Home Secretary Sajid Javid suggested to Parliament on Wednesday that children of jihadists who lose their citizenship could still be British.

"Children should not suffer, so if a parent does lose their British citizenship, it does not affect the rights of their child," he said. Earlier this week, he said the UK had revoked citizenship from more than 100 people.

Hashi Mohamed -- a lawyer who helped write a report into deprivation of nationality with the UK's previous reviewer of terrorism legislation, David Anderson -- told CNN that the attempt to revoke Begum's citizenship was an "unprecedented" reworking of British immigration law.

Mohamed said Javid seemed to be relying on a section in the 2014 Immigration Act, which states that nationality can be revoked if there are "reasonable grounds for believing that the person is able, under the law of a country or territory outside the United Kingdom, to become a national of such a country or territory."

Mohamed said Javid's move had opened a can of worms which risked creating a "two-tiered British nationality" which could mean that "if you were born in bred in the UK, but your parents were born somewhere else and had dual nationality -- then your nationality as somebody born and raised in the UK is at risk."

Mohamed also noted that the decision appeared to run against the Home Office's 2018 counter-terrorism policy, which includes an illustrated example of what to do with women who have joined ISIS and children returning to the UK.

"Following the mother's detention the British authorities are notified. DNA testing of the child is conducted to establish their entitlement to a British passport. Given that the mother has lived in Daesh-held territory, the Home Secretary and a judge approve the use of a Temporary Exclusion Order (TEO) to manage her return to the UK," the 2018 guidance said.

On Wednesday, UK Prime Minister Theresa May said there was a "very clear set of criteria" on which the Home Secretary considers depriving British nationals of their citizenship, but declined to provide further insight into the government's rationale.

Begum: 'Don't know why my case is different'

Begum told ITV that she might explore a potential citizenship route through her Dutch husband, an ISIS fighter who surrendered to US-backed forces in Syria weeks ago.

"Another option I might try with my family is my husband is from Holland and he has family in Holland," she told ITV. "Maybe I can ask for citizenship in Holland. If he gets sent back to prison in Holland I can just wait for him while he is in prison."

"I heard that other people are being sent back to Britain, so I don't know why my case is any different to other people, or is it just because I was on the news four years ago?"

Begum was 15 when she flew out of Gatwick Airport with two classmates and traveled to Syria. The young women, all from the Bethnal Green Academy in east London, were to join another classmate who had traveled to Syria months earlier.

The Times of London reported in mid-February that Begum was nine months pregnant and that she wanted to come home to have her child. She said she had two other children during her time in Syria who died in infancy from malnutrition and illness.

Days later, she had her baby. From a Syrian refugee camp of 39,000 people in al-Hawl, Begum told The Times she had no regrets about traveling to Syria but told the paper that "the caliphate is over."

Hi: 90° Lo: 67°
Feels Like: 72°
More Weather
Tropical Depression Claudette has now moved into Alabama and Georgia, leaving with some cloud cover but dry conditions. Most of us will stay dry through this Father's Day but some spotty showers will likely through the late afternoon.

A few stray showers for Father's Day but mostly dry

Smooth mayoral transition is the goal in Columbus