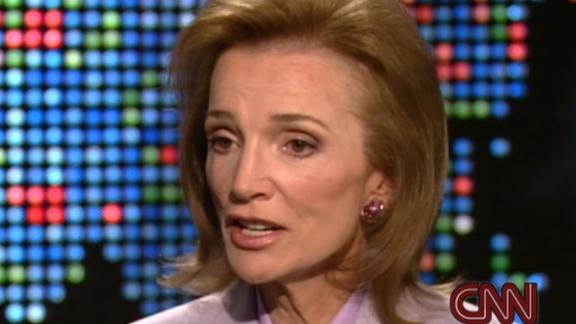 Lee Radziwill talks about her career with CNN's Larry King in 2001. Radziwill, the younger sister of former first lady Jacqueline Kennedy Onassis and a former princess, died peacefully in her New York home, her family said in a statement to CNN. She was 85.

Lee Radziwill, younger sister of former first lady Jacqueline Kennedy Onassis and a former princess, died peacefully Friday night in her New York home, her family said in a statement to CNN. She was 85.

"The family appreciates the outpouring of sympathy and support received, and would request that the privacy of Lee's family and friends be observed at this difficult time. Details of Lee's funeral and memorial events will be circulated as soon as they are available," said the statement.

Radziwill was born Caroline Lee Bouvier in 1933, four years after her sister.

She was married three times, including to Prince Stanislas Radziwill of Poland with whom she had two children. They were married in 1959 and divorced in 1974.

Radziwill, a well-known socialite, told The New York Times in 2013 she understood the additional fame of being Jackie Kennedy's sister.

"Well, at times it was annoying, at times funny," she said. "Perhaps the most depressing part was that whatever I did, or tried to do, got disproportionate coverage purely because of Jackie being my sister. But you learn to deal with the scrutiny, even the lies, as long as it's not malicious."

She was also a fashion icon. Designer Giorgio Armani told WWD she was extremely elegant.

"When I met her in the early '80s, I had the impression that she represented a very contemporary irony about American aristocracy, which is almost impossible to define," he told the fashion trade journal. "It is one that combined ease and sophistication, spontaneity and respect for the rules."