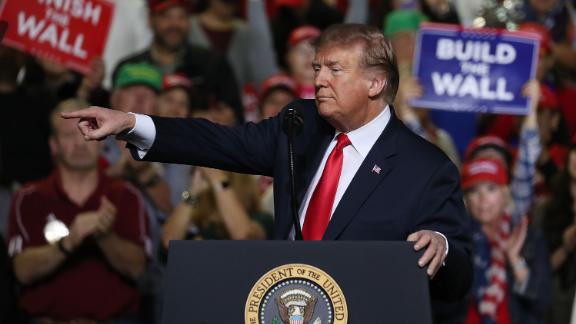 After congressional negotiators reached a tentative deal to avert a shutdown and provide funds for President Trump's border wall, lawmakers wait to see if Trump will agree to it. CNN's Kaitlan Collins reports.

If you live in the northern half of the US, you'd better throw on a coat because you're probably under some kind of winter storm warning, watch or advisory. Here's what else you need to know to Get Up to Speed and Out the Door. (You can also get "5 Things You Need to Know Today" delivered to your inbox daily. Sign up here.)

There's a deal on the table, but will the President go along with it? That's the question Washington is waking up to this morning, after congressional negotiators said last night they'd reached an agreement in principle to avoid another government shutdown. The deal would include $1.375 billion dollars for barrier funding to cover about 55 miles of new barrier in the Rio Grande Valley, which had been a priority for the White House, sources tell CNN. But that's far short of the $5.7 billion President Trump wanted for a border wall. Trump didn't say much about the agreement during his rally in El Paso, Texas, (although Fox News host Sean Hannity called it "garbage"). But White House officials say the President might just take the deal and combine it with other federal funds to start building the wall.

Freshman Democratic Rep. Ilhan Omar of Minnesota apologized for tweets she put out that many considered anti-Semitic. "Anti-Semitism is real and I am grateful for Jewish allies and colleagues who are educating me on the painful history of anti-Semitic tropes," Omar said in a statement. The controversy over Omar's tweets -- which suggested GOP support of Israel is fueled by donations from a pro-Israel lobbying group -- highlight the growing divide in the Democratic Party over Israel. Many of the Dems' 2020 presidential contenders, taking their cues from the progressive base, seem willing to break with the pro-Israel foreign policy stance that's guided the party for a generation. But the tweets by Omar, one of the first Muslim women in Congress, expose the political risks of going down that road.

The woman who accused Virginia Lt. Gov. Justin Fairfax of rape also says an ex-Duke basketball player raped her. Meredith Watson says the player is Corey Maggette, her attorney said. Maggette, who played in the NBA for 14 years and is now a basketball analyst for Fox Sports West, denied the allegations to The New York Times, which first reported the claim. The accusation also ties into Watson's claims against Fairfax, who also both attended Duke. Watson's attorney says Fairfax used his knowledge of Watson's earlier alleged assault by Maggette to take advantage and rape her in 2000. Fairfax, who has also been accused of sexually assaulting another woman, denies both claims. A lawmaker had started drafting impeachment articles to push Fairfax out of office but has backed off those plans as Dems call on him to resign.

Climate activists are threatening to sue Royal Dutch Shell to try to force it out of the oil business. A bloc of environmental groups in the Netherlands, where the company is based, says it wants to get a court ruling that would compel Shell to move away from fossil fuels and toward renewable energy. The groups say Shell is "deliberately obstructing" efforts to keep global warming well below 2 degrees Celsius, the key goal of the Paris agreement. The legal action would seek to hold Shell responsible under Dutch law for its contributions to climate change and all the environmental damage associated with it. Shell says it supports the Paris accord and is committed to cutting its carbon footprint in half by 2050.

The insects are dying -- and that could be bad news for all of us. A new study says insect populations are declining so fast worldwide that 40% of species could be extinct within a few decades. And if that happens, it would likely have a "catastrophic" effect on the planet, this study says. The use of pesticides is listed as the primary culprit, as well as habitat loss and climate change. The study's authors say the only way to reverse this is to reduce the use of pesticides and replace them with "more sustainable, ecologically-based practices."

Some of you still manage to get lost while traveling, despite those fancy smartphone apps. Google hopes giant virtual arrows will help.

Two boys in North Carolina stopped in the road to say the Pledge of Allegiance, and social media erupted with joy.

Fans were ticked that Will Smith wasn't a blue genie when we got our first look at the new "Aladdin." Now in the latest trailer, he's blue ... and fans are ticked.

A pair of firefighters in St. Louis walked a mile on ice to get an injured patient to the hospital.

Congrats to Richard Gere and Alejandra Silva. The 69-year-old actor and his wife just welcomed a baby boy into the world.

Sometimes your buddy's tail is the best toy. Until your bud gets tired of being a plaything. (Click to view.)