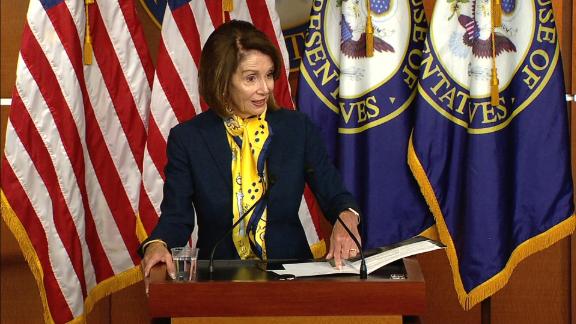 House Speaker Nancy Pelosi is a beacon of hope. At 78, she is wielding her power brilliantly, busting stereotypes of aging women, and winning despite facing outright ageism coupled with sexism throughout her rise to power. She's held her ground, refusing to be bullied -- and she just bested President Donald Trump by canceling the State of the Union until he reopens the government.

On Wednesday, Pelosi called Trump's bluff again, rightly pointing the spotlight on him as he has tried to blame her for the shutdown, and uninviting him from delivering the State of the Union until he allows the government to reopen. Late Wednesday, Trump essentially admitted defeat, conceding he would not be able to give his State of the Union address until after the shutdown ends.

Pelosi is fighting for what matters and, in doing so, reshaping the image of older women in this country.

Let's not forget where this started. At a December meeting at the White House, Trump vowed to shut down the government if he didn't get billions of dollars for a wall to make good on a wasteful and racist political promise, saying to Democratic leaders, "I will be the one to shut it down. I'm not going to blame you for it."

Pelosi called his bluff then, too, and told him he could have passed the funding while his party still had control over the full Congress.

Trump failed to win over his own party in the previous Congress and 33 days later, he still owns the longest government shutdown in history.

So 800,000-plus government workers and contractors haven't received a paycheck in more than a month. And vital services like food safety inspection, domestic violence shelters and airplane safety inspections are at risk. In the meantime, Pelosi has been at it, putting more cracks in the glass ceiling by becoming the first woman to be elected House speaker twice, as well as one of the oldest legislators ever to hold that position.

While the President has done nothing but storm around and spin out of control, Pelosi has remained cool and calm, with her eye on the prize. Immediately, she passed a bill through the House to open the government.

Her performance over the past few weeks, and throughout her career, is only made possible by the years of service she has provided -- and the wisdom that comes with it.

The secret is out. Women. Get. Older. Our hair changes color. Wrinkles happen. And we get more effective, more powerful, more ourselves. Yes, we continue to get (and be) so much more as we age, even as our culture and pay history tells us the exact opposite.

This aging thing is personal for me.

Just last week, as my cousin and I got ready for our Oma's 103rd birthday dinner, we looked at each other in the mirror and started talking white hair. Both of us are in the midst of midlife changes, and we are still struggling to embrace our aging.

Our Oma is all in though, and always has been. Just like Pelosi, she breaks the mold, proving that it's time to throw the negative framing of older women out the window. In fact, at 103, Oma is still smart as hell, gorgeous, witty, and has a youthful twinkle in her eyes.

We have a lot to learn from the women who came before us about aging, power and thumbing our noses at our nation's shortsighted thinking about older women.

At her party last week, Oma modeled some important clues. To start, it turns out that simply embracing the beauty of aging can be a big part of moving toward healthy longevity.

Case in point: On the morning of her 103rd birthday when I asked our Oma how it felt, she said, "I see aging as being pretty and different. I never looked at aging as a sign of being 'old.' "

As Oma talked, she reminded me about another of her secrets to a long life, which is a can-do attitude (which is something, I might add, I've witnessed Pelosi have even in the toughest of times).

In my Oma's words last week: "I always try to look for the positive. There's something positive about everybody and everything if you look closely."

Studies show that Oma's onto something. One Mayo Clinic study found a 50% lower risk of early death for optimists than pessimists.

Then Oma told me that she doesn't feel a day over 85 and that she's looking forward to the day "The Crumb" (as she calls Trump) is out of office. After that she got up from the table and did some 103rd birthday dance moves.

Oma's also onto something in saying that she feels younger than her years. A recent study found that the age you feel is more important than your birth age when it comes to calculating health outcomes and longevity.

At her birthday party, I told her, "You look gorgeous." And she responded, "But don't I look gorgeous every day?!" She's right.

But women aren't just told the opposite -- like French writer Yann Moix who declared he's incapable of ever loving a women older than 50 (he's also 50) -- we're shown the opposite in the form of age discrimination, tied to gender discrimination, which turns into a double unfair wallop of harm as we face cuts in our paychecks due to gender, age and other factors such as race.

It doesn't have to be that way. We can look for the positive models of older women like Pelosi (and my Oma) who are absolutely eviscerating the despicable narrative of older women being, well, weak, ugly and stupid.

In fact, if you look at the data it shouldn't be surprising that older women such as Pelosi are leading the way in this time of crisis. Studies show that women make better policymakers, better leaders and produce better business outcomes than men; and yes all those stats include older women, such as Pelosi and Supreme Court Justice Ruth Bader Ginsburg.

As we age, we rise up in leadership and we get smarter.

We have to change our perspectives and recognize older women as just as smart and powerful as any of those "silver fox" older men.

So what really keeps Oma sharp at 103? A shot of scotch whiskey each day at 5 p.m. -- just one! (and research backs this up, too) -- rare steaks and burgers, not giving into ideas about what it is to be "old," dancing when the music calls her, playing sports when possible throughout her life, taking time to make the world better -- and fully embracing all of the brilliance of aging, white hair and all.

Now let's pass some of that whiskey and rare steak to Pelosi. We need her around to at least 103!

Hi: 90° Lo: 72°
Feels Like: 95°
More Weather
High pressure gradually builds into our area over the next several days. This will gradually dwindle away chances for some showers and thunderstorms. As the chances for rainfall dwindle, chances for greater heat and heat index values will increase.

More isolated to scattered showers and thunderstorms will continue for Friday

VIDEO - Police officer and firefighter of the year announced in Amory

Noxubee County investigates three murders in under a month