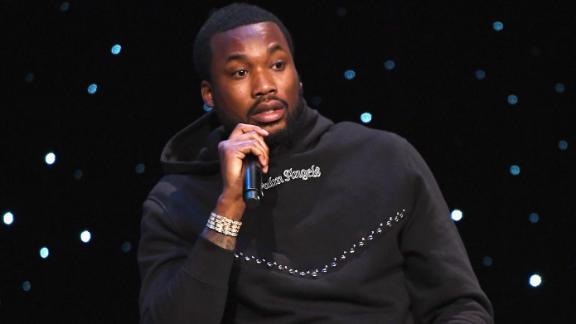 Rappers Meek Mill and Jay-Z joined a group of business leaders to launch REFORM Alliance in an effort to fight against unjust parole and probation violation sentences.

Rappers Jay-Z and Meek Mill have joined with sports and business leaders to try and reform the criminal justice system.

The pair were on hand Wednesday at the John Jay College of Criminal Justice in New York to announce the formation of the REFORM Alliance, an organization that aims to reduce the number of people serving unjust parole and probation sentences.

The group has pledged $50 million to launch the organization and hired CNN political commentator Van Jones as CEO.

Jones said in a statement that the job "is the opportunity of a lifetime."

"I have spent my entire adult life preparing myself to help lead an initiative of this magnitude," he said. "I'm looking forward to working with this powerful group of founders to disrupt the status quo and shift the criminal justice system landscape for generations to come."

Both Jay-Z and Mill have been outspoken in their advocacy for criminal justice reform.

He was arrested in 2017 after being involved in a fight and then again in another incident that involved him popping wheelies on a dirt bike.

The #FreeMeekMill movement resulted in his release after five months in prison and shone a light on what critics said was the excessive nature of the rapper's original sentence of a decade on probation.

Meek Mill on prison reform: 'We are trapped inside of a system'

Since then, Mill has taken up the fight to make sure others don't receive a similarly harsh sentence.

"I got caught up in the system and every time I started to further my life with the music industry ... every year or two it was something that brought me back to ground zero, and it was probation," Mill said during Wednesday's press conference to announce the alliance.

Jay-Z was one of several celebs who rallied around Mill while he was jailed.

In November, Jay-Z wrote an opinion piece for The New York Times in which he took up the fight for justice for Mill and said the criminal justice system "stalks black people."

On Wednesday he said the pair had grown up in an environment where they witnessed the unevenness of such a system when it comes to people of color.

"We want to be very clear, if someone commits a crime they should go to jail," Jay-Z said. "But these things are just disproportionate and the whole world knows it."